UALR alums, now based in D.C., provide funding for award recipient to travel to Washington 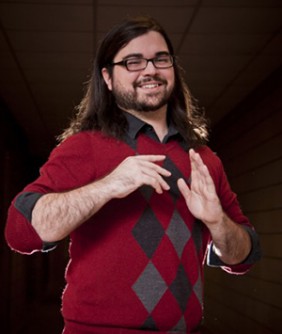 Newswise — Little Rock, Ark. (Jan. 29, 2014)--The Stonewall Scholarship at the University of Arkansas at Little Rock has reached full endowment thanks to help from money raised at a recent fundraiser in Washington D.C., hosted by the scholarship founders.

Jeff Dutton and Bryan Goodman, both UALR alums who graduated in 1996, established the scholarship in 2004 to encourage students interested in Lesbian, Gay, Bisexual and Transgender issues.

The scholarship is named for the notorious June 1969 incident in which a New York City gay club known as the Stonewall Inn was targeted for a raid by NYC police. A protest riot ensued and the event is regarded by many as history's first major protest on behalf of equal rights for homosexuals.

This year’s recipient is Clint Brockway, a graduate student in the Interdisciplinary Studies program at UALR, who works as an American Sign Language interpreter. Brockway said the award will offset the costs associated with his master’s thesis.

“Without it, I’m not sure how I would be able to gather the information I need to write my thesis and graduate,” he said.

Brockway received an all-expenses-paid trip to Washington as part of his award. Past scholarship winners are always invited to return each year to participate in the Washington D.C. fundraiser, held at Dutton’s Logan Circle home.

Sarah Beth Estes, an associate dean in the College of Arts, Humanities, and Social Sciences, has served on the scholarship selection committee since coming to UALR in 2006.

She said although the scholarship was initially offered only to students in CAHSS, it is now being offered to new and returning students university wide.

“The applicants are really doing impressive work academically, politically, and creatively,” she said.

Estes said that until last year, the scholarship was the College's largest award.

“It is truly remarkable that Jeff (Dutton) and Bryan (Goodman) invite past recipients to come back to participate, and I think it is fantastic we have such great envoys for UALR,” Estes added. “It’s really phenomenal to have this strong base of support in Washington.”

Goodman said interest in the scholarship and the annual fundraising event to support it has grown through the years.

“The scholarship winners are all interesting people who have done interesting things, so getting to know them has been rewarding for Jeff and me,” said Goodman. “It’s really become like a family. And it’s been a great way for UALR to get its name out in this area.”

Interestingly, Goodman said a wide cross section of people regularly come to the fundraiser, and participants are not confined to people actively involved in advancing LGBT issues.

“Folks from both ends of the political spectrum come, and I think they come because they want to feel like they are a part of something bigger than themselves,” Goodman said. “They see people coming up from Arkansas who are working to make a difference, and I think that makes people feel good to be part of that effort.”

Derek Boyce, membership and engagement manager at the UALR Alumni Association, joined the cohort traveling to Washington for the annual UALR fundraiser in November. He said contributions so far have lifted the endowment to over $21,000.

“This Washington fundraiser has become a wonderful new tradition that will not be leaving anytime soon,” added Boyce.

To be eligible for the scholarship, a full-time or part-time student at UALR must be able to demonstrate knowledge of LGBT issues and have a record of community leadership and/or demonstrate leadership capabilities.