It’s an all too familiar story - teens attacking teens. But a Vanderbilt medical doctor is working to stop the violence in middle schools. 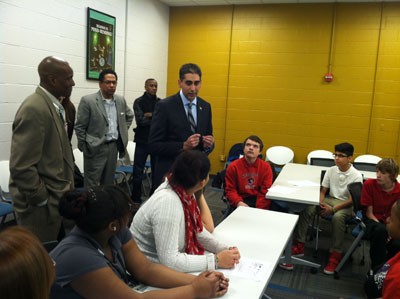 Newswise — Violent behavior and beliefs among middle school students can be reduced through the implementation of a targeted violence intervention program, according to a Vanderbilt study released in the Journal of Injury and Violence Research.

Manny Sethi, M.D., assistant professor of Orthopaedic Surgery and Rehabilitation, and his Vanderbilt co-authors evaluated 27 programs nationwide as part of a search for an appropriate school-based violence prevention program.

Their findings led to a single, evidence-based conflict resolution program that was evaluated in a pilot study of a Nashville middle school with high rates of violence.

“I think the power of what we are doing is the power of community and, in this case, the power of doctors partnering with educators,” Sethi said. “When things get to me, it is too late. People are victims of violent injuries, but we are on the back end of the problem instead of the front end.

In the study, 122 students completed the conflict resolution program and described their behavior and experiences with violence in a pre-test/post-test self-rate questionnaire. Results showed a significant decrease in violent behavior and an increase in students’ competencies to deal with violence.

Sethi said a larger-scale intervention is needed to develop more conclusive evidence of the effectiveness, and has since obtained further funding from the Robert Wood Johnson Foundation at Meharry Medical Center. The program has now been expanded to 10 schools with roughly 3,500 children.

Co-author Rachel Thakore, research coordinator and health policy fellow in the Vanderbilt Orthopaedic Institute Center for Health Policy, said she was surprised to see statistics showing that one-third of all students in Nashville middle schools do not feel safe in school.

“I had no idea when I went to these schools that one of their teachers would tell me that they already had several bullying and fighting incidents that morning,” Thakore said. “Just going in to the schools made me realize how important it was to target this young age group.”

A total of 707,212 young persons ages 10 to 24 were treated in emergency departments for injuries sustained from physical assaults in 2011, according to the Centers for Disease Control and Prevention (CDC).

"This is about giving our children the tools they need. I think you can legislate all you want, but until we can really reach these children in a different way, I think it is going to be very difficult to reduce the amount of violence we are seeing in our kids,” Sethi said.

“We’re not giving them mechanisms to deal with conflict in a peaceful way. And it starts all the way from bullying and it becomes bigger, to the things that present in our emergency rooms like shootings and stabbings. This program is about developing the mental machinery to deal with conflict in a peaceful way. What we need to do as a community is come together and combat these things. If we rely on the power of our communities across Tennessee we can do amazing things.”

The study was supported by a grant from The Robert Wood Johnson Foundation Center for Health Policy at Meharry Medical College. Alex Jahangir, M.D., associate professor of Orthopaedic Surgery and Rehabilitation, co-authored the paper.