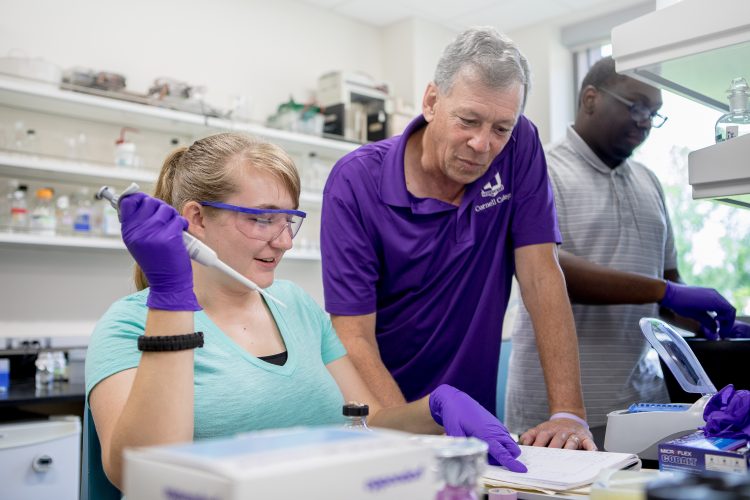 Newswise — MOUNT VERNON, Iowa - Cornell College Professor of Biology Craig Tepper has been working with students to understand the impact of global warming on coral reefs for 20 years.

His team has published five research papers, which have featured a total of 10 different Cornell students as co-authors. All of the papers have been written by Tepper–until now.

Senior Mara Schwiesow, who has been working with Tepper since her sophomore year, has taken on the challenge of becoming the senior author of the latest research paper.

“The expectations are much greater to publish a paper than writing a paper for a science class assignment,” Tepper said. “Mara’s personal growth as a scientist convinced me to allow her to write the manuscript with my editorial assistance. Since she was one of the main contributors to the research project, and she has written the manuscript, she is the senior author of the paper.”

The biochemistry and molecular biology and philosophy double major has just completed writing what Tepper calls a “solid manuscript draft” titled “Symbiodinium Distribution Patterns in Millepores in the Caribbean: South Water Cay, Belize and San Salvador, The Bahamas.” Four other Cornell alumni are included as co-authors.

Schwiesow says it has been a challenging project and different than anything she’s ever done before.

“Everything has to be perfect,” Schwiesow said. “I wrote around five drafts of the introduction alone. And, it is a different way of thinking because you have to figure out how to report your findings in the context of the bigger picture of global warming. I have learned a lot just in how much work goes into writing something to be published, but also thinking about science as a story rather than just science for the sake of science.”

The Colorado native started working with Tepper the summer after her sophomore year during the Cornell Summer Research Institute (CSRI). She analyzed coral samples collected from Belize and the Bahamas.

“I learned not only laboratory techniques, but also developed my problem-solving skills, presentation skills, and analytic skills,” Schwiesow said.

The overall research is looking for answers about why coral bleaching is happening in the Caribbean. They’re exploring this by studying the algae that live within the tissues of fire coral.

“Coral bleaching happens because corals experience a stress event such as when water temperatures increase above the corals’ tolerance level, which is usually around 30 degrees Celsius (86 degrees Fahrenheit). Either the algae leave or the coral ‘kicks’ them out because the symbiotic relationship has been damaged. The coral then turns white–the algae give the coral its color– and are weakened because they no longer receive nutrients from the algae.”

Schwiesow is detailing the lab’s latest findings in the manuscript. They have learned that the coral in Belize and the Bahamas have different types of algae. Algae that aren’t as common in Bahamian fire corals, referred to as clade A in the report,  are actually the dominant form in the Belize fire corals.

“We think it has to do with the fact that Belize sea surface temperatures are warmer and closer to the bleaching point, which means that the corals there are under more stress than the corals in the Bahamas,” Schwiesow said. “We think that clade A offers a physiological advantage to its host and is helping with this stress.”

The research team also found that the algae were different in reefs found in deeper water where it was cooler than the reefs found in warmer, shallower waters.

“We think that this means that corals in Belize have altered their algae populations to cope with rising water temperatures, which is in accordance with the Adaptive Bleaching Hypothesis,” Schwiesow said.

After working on the paper for Blocks 1–4, Tepper and Schwiesow are planning to submit the manuscript to the Journal of Marine Science by the end of the semester. Schwiesow’s first two blocks of the year were independent study blocks, so she could focus all of her time during those 3 ½ week blocks on perfecting the manuscript since Cornell students take One Course At A Time.

The success of this project depends not only on her hard work but on faculty-student collaboration. Tepper and Schwiesow worked through every detail and discussed the best way to write about the research.

“Working with Tepper has been great,” she said. “I’ve learned so much and I am grateful for the opportunity.”

Schwiesow says she has gained a new sense of perseverance and a reaffirmation that this is the career she wants to pursue. She plans on getting her doctoral degree and being in charge of her own lab someday.