"Science Is Antithesis of Fake News," Says Wildlife Conservation Society President Ahead of Earth Day and March for Science 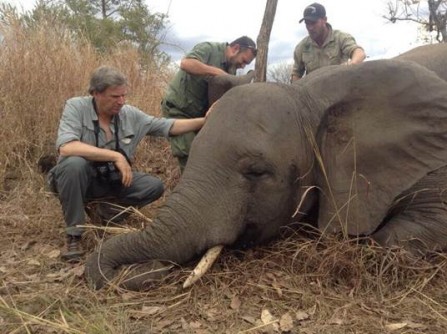 “Science is behind the good news and bad news about wildlife conservation but it has nothing to do with the fake news. Science is the antithesis of fake news.”

Washington, DC, April 19, 2017 – The following statement was issued today by Wildlife Conservation Society President and CEO Cristian Samper on the importance of science to wildlife conservation:

“Science is at the core of wildlife conservation. It allows us to understand how to conserve wildlife and wild places and measure the impact of our work to save them. At WCS, we march for science every day through our field work in nearly 60 nations and in our zoos aquarium in New York City.

“We could not do our work without science. Our WCS scientists produce more than 400 research papers a year. Science has informed our work throughout our 122-year history – helping to discover new species, to prevent the extinction of species, to achieve recovery of species, to establish protected areas, and to inform policies that help wildlife and communities thrive together.

“More recently, science has given us important data that will help with the recovery of forest elephants that have been decimated by poaching. In a paper published last year in the Journal of Applied Ecology, researchers found that forest elephants begin breeding later and have much longer calving intervals than other elephants, which means the population takes much longer to increase. Low birth rates mean that it will take forest elephant populations at least 90 years to recover from their losses. WCS scientist Andrea Turkalo, lead author of the study who collected data over several decades, said this research provides critical understanding regarding the dire conservation status of forest elephants.

“In another paper published last year in Nature Communications, a team of scientists revealed a complex story of how humans are altering natural habitats at the planetary scale. WCS scientist, James Watson, a co-author of the paper, noted that the data and maps in the research show that three quarters of the planet is now significantly altered and 97 percent of the most species-rich places on Earth have been significantly altered.

“Those are just a few examples of the importance of science as we work to protect nature and wildlife. And that is why I will be marching in Washington, DC, on the 47th anniversary of Earth Day at the March for Science with my family, our WCS colleagues across the globe, and hundreds of our WCS advocates. All together, we are marching on six continents.

“By marching, we aim to celebrate science, not to politicize it.  While science is the fine print in all smart policy – at WCS, we want to highlight at the March for Science the importance of science to all our work. Science is behind the good news and bad news about wildlife conservation but it has nothing to do with the fake news. Science is the antithesis of fake news.

“In 1970, more than 20 million marched on the first Earth Day. I will be honored to march with the millions who are expected to march from around the world on Earth Day 2017 in recognition of the power of science. Science helps us navigate the complicated world of wildlife conservation with the facts. Nothing we do at WCS in our efforts to save wildlife is accomplished without science.”

(In addition to serving as President and CEO of WCS, Dr. Samper was inducted into the American Academy of Arts and Sciences in 2015.)