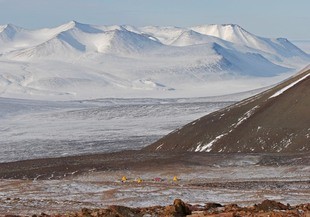 Specks of yellow dot the landscape showing the field camp of Allan Ashworth and Adam Lewis, professors of geosciences at North Dakota State University, whose research on Antarctica appears in the May 30, 2008, issue of Science.

Newswise — Field research in Antarctica by Allan Ashworth and Adam Lewis, both professors in the Department of Geosciences at North Dakota State University, Fargo, is featured in the May 30 issue of Science magazine.

The article, "Freeze-Dried Findings Support a Tale of Two Ancient Climates" by journalist Douglas Fox, describes how the discovery of freeze-dried moss has provided evidence about the climate millions of years ago in the Dry Valleys of the icy continent. The ancient plant material indicates there was a tundra-like ecosystem in Antarctica 14 million years ago.

"For scientists, one of the premier journals is Science. Their readership cuts across disciplines and is truly global in extent," Ashworth said of the journal.

Ashworth and Lewis have studied fossilized vegetation in Antarctic lakebeds, collecting fossils of plants, mollusks and insects that help to determine past climate changes. During four expeditions, Ashworth and colleagues have collected hundreds of pounds of rock from which fossils have been extracted and studied by researchers around the world. The fossils and dated volcanic ash found at the site indicate that an abrupt climatic cooling occurred about 14 million years ago, marking the transition to the permanent ice sheets that cover the continent today.

The research described here is supported by grants from the National Science Foundation's Polar Programs.

The work of Ashworth and Lewis is also featured in the documentary "Ice People" by Anne Aghion. http://www.icepeople.com. The documentary premiered at the San Francisco International Film Festival and in New York at the American Museum of Natural History's Polar Year Weekend earlier this year.