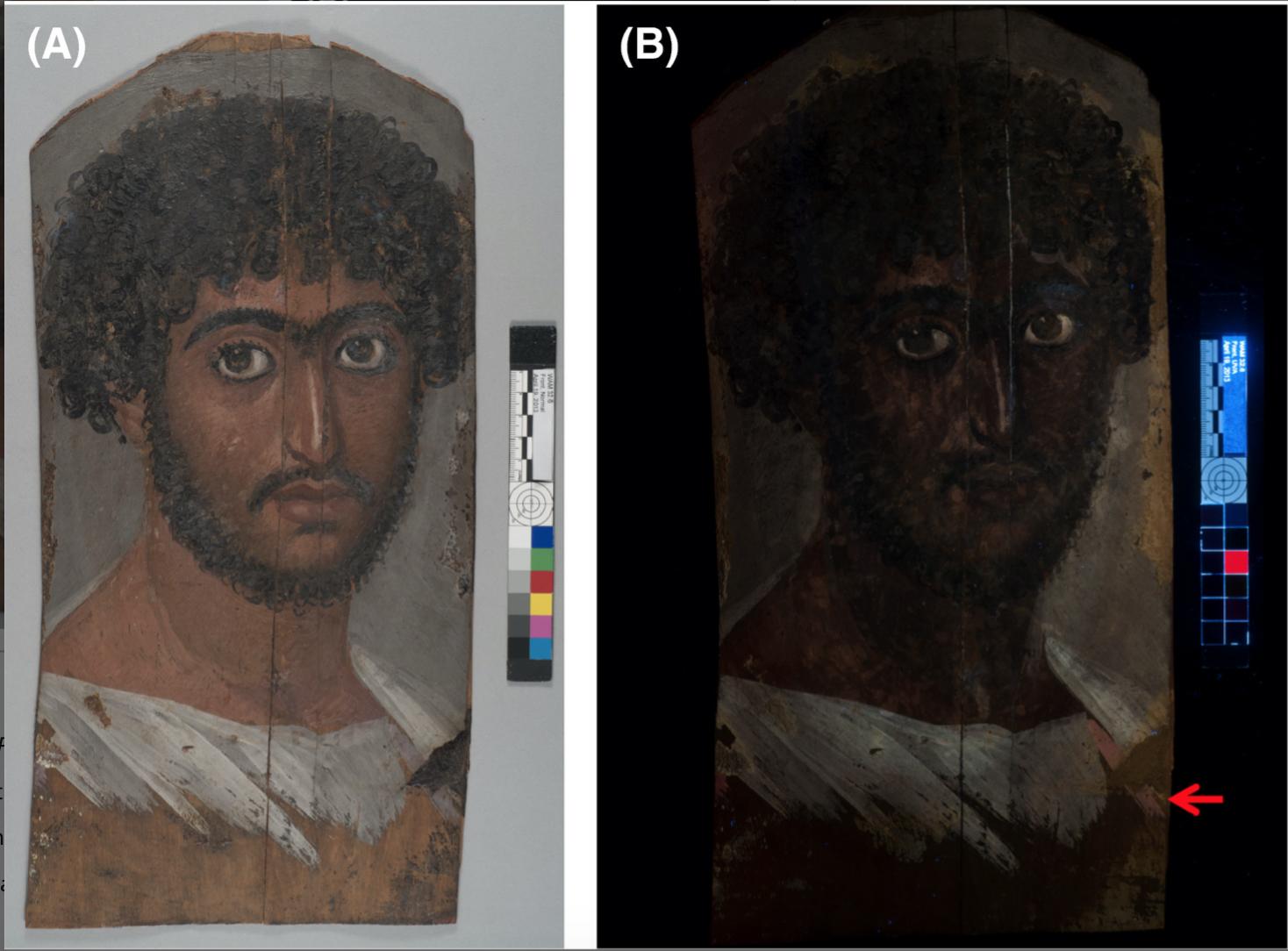 (A) "Portrait of a Bearded Man" (Walters Art Museum #32.6), dated c. 170-180 CE from Roman Imperial Egypt; (B) The portrait under ultraviolet light. The purple clavi on the shoulders appear pink-orange, indicated by an arrow.

Newswise — How much information can you get from a speck of purple pigment, no bigger than the diameter of a hair, plucked from an Egyptian portrait that’s nearly 2,000 years old? Plenty, according to a new study. Analysis of that speck can teach us about how the pigment was made, what it’s made of—and maybe even a little about the people who made it. The study is published in the International Journal of Ceramic Engineering and Science.

“We’re very interested in understanding the meaning and origin of the portraits, and finding ways to connect them and come up with a cultural understanding of why they were even painted in the first place,” says materials scientist Darryl Butt, co-author of the study and dean of the College of Mines and Earth Sciences.

The portrait that contained the purple pigment came from an Egyptian mummy, but it doesn’t look the same as what you might initially think of as a mummy—not like the golden sarcophagus of Tutankhamen, nor like the sideways-facing paintings on murals and papyri. Not like Boris Karloff, either. 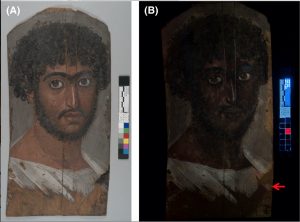 (A) “Portrait of a Bearded Man” (Walters Art Museum #32.6), dated c. 170-180 CE from Roman Imperial Egypt; (B) The portrait under ultraviolet light. The purple clavi on the shoulders appear pink-orange, indicated by an arrow.

The portrait, called “Portrait of a Bearded Man,” comes from the second century when Egypt was a Roman province, hence the portraits are more lifelike and less hieroglyphic-like than Egyptian art of previous eras. Most of these portraits come from a region called Faiyum, and around 1,100 are known to exist. They’re painted on wood and were wrapped into the linens that held the mummified body. The portraits were meant to express the likeness of the person, but also their status—either actual or aspirational.

That idea of status is actually very important in this case because the man in the portrait we’re focusing on is wearing purple marks called clavi on his toga. “Since the purple pigment occurred in the clavi—the purple mark on the toga that in Ancient Rome indicated senatorial or equestrian rank- it was thought that perhaps we were seeing an augmentation of the sitter’s importance in the afterlife,” says Glenn Gates of the Walters Art Museum in Baltimore, where the portrait resides.

The color purple, Butt says, is viewed as a symbol of death in some cultures and a symbol of life in others. It was associated with royalty in ancient times, and still is today. Paraphrasing the author Victoria Finlay, Butt says that purple, located at the end of the visible color spectrum, can suggest the end of the known and the beginning of the unknown.

“So the presence of purple on this particular portrait made us wonder what it was made of and what it meant,” Butt says. “The color purple stimulates many questions.” 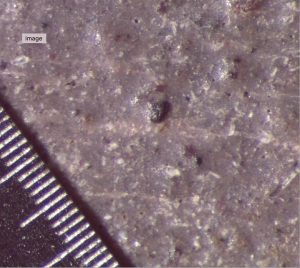 A magnified detail of the left clavus, showing a large purple pigment particle with a rough gem-like appearance.

Through a microscope, Gates saw that the pigment looked like crushed gems, containing particles ten to a hundred times larger than typical paint particles. To answer the question of how it was made, Gates sent a particle of the pigment to Butt and his team for analysis. The particle was only 50 microns in diameter, about the same as a human hair, which made keeping track of it challenging.

“The particle was shipped to me from Baltimore, sandwiched between two glass slides,” Butt says, “and because it had moved approximately a millimeter during transit, it took us two days to find it.”  In order to move the particle to a specimen holder, the team used an eyelash with a tiny quantity of adhesive at its tip to make the transfer. “The process of analyzing something like this is a bit like doing surgery on a flea.”

With that particle, as small as it was, the researchers could machine even smaller samples using a focused ion beam and analyze those samples for their elemental composition.

What did they find? To put the results in context, you’ll need to know how dyes and pigments are made.

Pigments and dyes are not the same things. Dyes are the pure coloring agents, and pigments are the combination of dyes, minerals, binders and other components that make up what we might recognize as paint.

Initially, purple dyes came from a gland of a genus of sea snails called Murex. Butt and his colleagues hypothesize that the purple used in this mummy painting is something else—a synthetic purple.

The researchers also hypothesize that the synthetic purple could have originally been discovered by accident when red dye and blue indigo dye mixed together. The final color may also be due to the introduction of chromium into the mix. 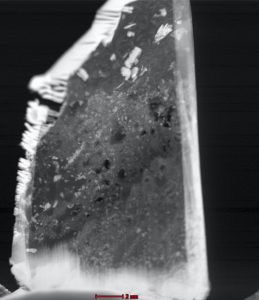 A pigment sample showing layering
within the particle.

From there, the mineralogy of the pigment sample suggests that the dye was mixed with clay or a silica material to form a pigment. According to Butt, an accomplished painter himself, pigments made in this way are called lake pigments (derived from the same root word as lacquer). Further, the pigment was mixed with a beeswax binder before finally being painted on linden wood.

The pigment showed evidence suggesting a crystal structure in the pigment. “Lake pigments were thought to be without crystallinity prior to this work,” Gates says. “We now know crystalline domains exist in lake pigments, and these can function to ‘trap’ evidence of the environment during pigment creation.”

Bottom of the barrel, er, vat

One other detail added a bit more depth to the story of how this portrait was made. The researchers found significant amounts of lead in the pigment as well and connected that finding with observations from a late 1800s British explorer who reported that the vats of dye in Egyptian dyers’ workshops were made of lead.

“Over time, a story or hypothesis emerged,” Butt says, “suggesting that the Egyptian dyers produced red dye in these lead vats.” And when they were done dyeing at the end of the day, he says, there may have been a sludge that developed inside the vat that was a purplish color. “Or, they were very smart and they may have found a way to take their red dye, shift the color toward purple by adding a salt with transition metals and a mordant [a substance that fixes a dye] to intentionally synthesize a purple pigment.  We don’t know.”

This isn’t Butt’s first time using scientific methods to learn about ancient artwork. He’s been involved with previous similar investigations and has drawn on both his research and artistic backgrounds to develop a class called “The Science of Art” that included studies and discussions on topics that involved dating, understanding and reverse engineering a variety of historical artifacts ranging from pioneer newspapers to ancient art.

“Mixing science and art together is just fun,” he says. “It’s a great way to make learning science more accessible.”

And the work has broader impacts as well. Relatively little is known about the mummy portraits, including whether the same artist painted multiple portraits. Analyzing pigments on an atomic level might provide the chemical fingerprint needed to link portraits to each other.

“Our results suggest one tool for documenting similarities regarding time and place of production of mummy portraits since most were grave-robbed and lack archaeological context,” Gates says.