Scientist Weighs in on Mind-Body Medicine at Dalai Lama Meeting 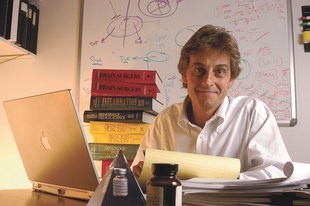 Newswise — Because he discovered a key link between the mind and the body, Kevin J. Tracey, MD, The Feinstein Institute for Medical Research's director and CEO, was invited to speak this morning at "Longevity and Optimal Health: Integrating Eastern and Western Perspectives." This conference, co-hosted by the Columbia University Integrative Medicine Program and Tibet House, has brought together leading scientists, scholars and practitioners to discuss how recent advances in the Western science of aging may reveal how the Indo-Tibetan traditions of meditation, diet and yoga extend life. The XIVth Dalai Lama, Tenzin Gyatso, is the guest of honor and will deliver a summary response integrating the discussions at the conclusion of the conference.

Through years of painstaking research on the immune system's response to injury, Dr. Tracey and his colleagues worldwide made several incremental discoveries that led to a new theory he coined "the inflammatory reflex." The inflammatory reflex is the foundation for the mind-body connection, as it provides a direct link between the nervous system and that which normally keeps people healthy — the immune system. This morning Dr. Tracey shared his findings and the latest applications of this theory during the panel discussion on "Protection," moderated by Erin Olivo, PhD, MPH, director of the Columbia Integrative Medicine Program.

First published in the journal Nature in December 2002, Dr. Tracey's groundbreaking discovery that the brain controls the immune system via the vagus nerve — the largest nerve in the body that wanders through the major organs — has gained international acclaim, including a Nobel Conference dedicated to the topic hosted by the renowned Karolinska Institute in Stockholm, Sweden, in September 2004, which he co-chaired.

One of the immune system's weapons against foreign invaders is a molecule called tumor necrosis factor, or TNF. A "big gun," TNF can cause a local response to an injury or infection, such as pain and redness. This is good to a point, but in excessive amounts TNF and other like molecules can be so toxic as to cause shock and death.

Dr. Tracey and his team of researchers discovered that the brain sends chemical messages through the vagus nerve to specific sites on immune cells in the body to block TNF release. In other words, the vagus nerve is the conduit through which the brain directly controls the immune system — and prevents excessive TNF, shock and death. This is the inflammatory reflex.

By studying patients with chronic inflammatory diseases, Dr. Tracey is trying to ascertain whether raising their vagus nerve activity with biofeedback decreases inflammation. The implication is that people with inflammatory diseases such as Crohn's, rheumatoid arthritis and peripheral vascular disease may be able to "think" their way to feeling better.

Altering brain activity may one day be a strategy to prevent disease, improve health and promote longevity. The inflammatory reflex has diverse applications for therapeutically targeting systemic inflammation in illnesses ranging from postoperative sepsis to autoimmune diseases to biological threat agents such as anthrax and plague. Because vagus nerve activity can be measured, researchers now have a way to scientifically test the effects of many ancient concepts and Indo-Tibetan practices such as meditation and yoga on longevity.

The New York Academy of Sciences plans to publish the conference proceedings.

About The Feinstein Institute for Medical ResearchLocated in Manhasset, NY, and part of the North Shore-Long Island Jewish (LIJ) Health System, The Feinstein Institute for Medical Research is among the top six percent of all institutions that receive funding from the National Institutes of Health. Building on its strengths in immunology and inflammation, oncology and cell biology, genomics and human genetics, and neurodegenerative and psychiatric disorders, its goal is to understand the biological processes that underlie various diseases and translate this knowledge into new tools for diagnosis and treatment. For more information, please visit http://www.FeinsteinInstitute.org.