1-May-2012 11:00 AM EDT, by National Center for Atmospheric Research (NCAR)
favorite_border 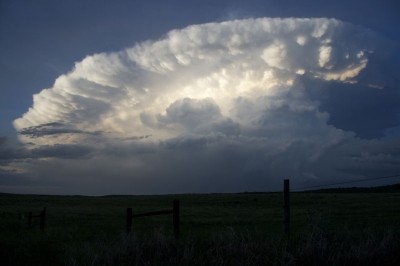 Thunderstorms, such as this one in eastern Colorado, can affect the atmosphere for many miles. 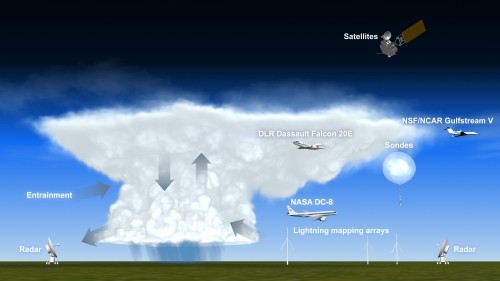 The DC3 field project will deploy a variety of airborne and ground-based instruments to study thunderstorms.

Newswise — BOULDER--Scientists at the National Center for Atmospheric Research (NCAR) and other organizations are targeting thunderstorms in Alabama, Colorado, and Oklahoma this spring to discover what happens when clouds suck air up from Earth’s surface many miles into the atmosphere.

The Deep Convective Clouds and Chemistry (DC3) experiment, which begins the middle of this month, will explore the influence of thunderstorms on air just beneath the stratosphere, a little-explored region that influences Earth’s climate and weather patterns. Scientists will use three research aircraft, mobile radars, lightning mapping arrays, and other tools to pull together a comprehensive picture.

“We tend to associate thunderstorms with heavy rain and lightning, but they also shake things up at the top of cloud level,” says NCAR scientist Chris Cantrell, a DC3 principal investigator. “Their impacts high in the atmosphere have effects on climate that last long after the storm dissipates.”

Past field projects have focused on either the details of thunderstorms but with limited data on the atmospheric chemistry behind them, or on the chemistry but with little detail about the storms themselves. DC3 is the first to take a comprehensive look at the chemistry and thunderstorm details, including air movement, cloud physics, and electrical activity.

Funding for DC3 comes from the National Science Foundation (NSF), National Oceanic and Atmospheric Administration (NOAA), and NASA. The scientists leading the project are from NCAR, Pennsylvania State University, Colorado State University, and NOAA, with involvement by more than 100 researchers from 26 organizations.

One of the key goals of DC3 is exploring the role of thunderstorms in forming upper-atmosphere ozone, a greenhouse gas that has a particularly strong warming effect high in the atmosphere.

“When thunderstorms form, air near the ground has nowhere to go but up,” says NCAR scientist Mary Barth, a principal investigator on the project. “Suddenly you have an air mass at high altitude that’s full of chemicals that can produce ozone.”

Ozone in the upper atmosphere plays an important role in climate change by trapping significant amounts of energy from the Sun. However, ozone is difficult to track because, unlike most greenhouse gases, it is not directly emitted by either pollution sources or natural processes. Instead, sunlight triggers interactions between pollutants such as nitrogen oxides and other gases, and those reactions create ozone. These interactions are well understood at Earth’s surface, but they have not been measured at the top of the troposphere, the lowest layer of the atmosphere, which is just below the stratosphere.

Updrafts within thunderstorm clouds range from about 20 to 100 miles (about 30-160 kilometers) per hour, so air arrives at the top of the troposphere, about 6 to10 miles (10-16 kilometers) up, with its pollutants relatively intact. The polluted air masses don’t keep rising indefinitely because of the barrier between the troposphere and stratosphere, called the tropopause.

“In the midlatitudes, the tropopause is like a wall,” says Barth. “The air bumps into it and spreads out.”

The DC3 scientists will fly through these plumes to collect data as a storm is under way. Then they’ll fly through the same air mass the next day, using its distinctive chemical signature to see how it’s changed over time.

"We are pretty sure lightning is the largest natural source of nitric oxide," says NOAA National Severe Storms Laboratory scientist Don MacGorman. "It is important to know the naturally occurring contribution."

The DC3 investigators are looking at three widely separated sites in northern Alabama, northeastern Colorado, and central Oklahoma to west Texas. All the sites have existing weather instrumentation on the ground, including dual-Doppler research radars, lightning mapping arrays, and balloon launches to measure the state of the atmosphere from the ground to the stratosphere.

“The internal structures of thunderstorms—and the lightning that accompanies them—differ considerably across the country,” says Brad Smull, NSF program director for physical and dynamic meteorology. “This in turn affects the chemical processes occurring inside these storms.”

The three research aircraft will be based at Salina Municipal Airport in Kansas, a location central to all three study areas. Each day, the research team will fly to whichever area has the most promising forecast for thunderstorms suitable for study.

The NSF/NCAR Gulfstream V research aircraft will undertake the bulk of the high-altitude measurements. Simultaneously, a NASA DC-8 will fly as low as 1,000 feet (300 meters) above the ground, measuring air flowing into the cloud bases as well as the chemistry of the surrounding air. The third research aircraft, a Dassault Falcon 20E operated by DLR, the German aerospace agency, will join DC3 for three weeks and fly especially close to storm cores at high altitudes.

Flying from multiple sites will enable the scientists to study different types of atmospheric environments. Alabama has the most trees and thus more natural emissions. The Colorado site is sometimes downwind of Denver’s pollution, whereas the Oklahoma and west Texas site may offer very clean air.

“The more different regions that we can study, the more we can understand how thunderstorms affect our climate,” Barth says.

Alex Pszenny, NSF program director for atmospheric chemistry, adds: “The simultaneous chemistry measurements from three of the world's most sophisticated research aircraft, combined with data from state-of-the-art radar and lightning sensor technology, will give the DC3 team the opportunity to make major advances in understanding those chemical processes.”