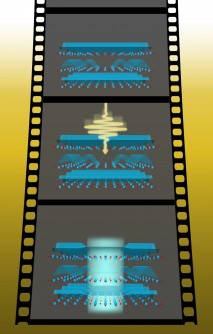 Image courtesy Jörg Harms, Max-Planck Institute for the Structure and Dynamics of Matter.

In equilibrium (top), the charge stripe "ripples" run perpendicular to each other between the copper-oxide layers of the material. When a mid-infrared laser pulse strikes the material (middle), it "melts" these conflicting ripples and induces superconductivity (bottom). The experimenters used a carefully synchronized x-ray laser to take this femtosecond–fast "movie" to reveal how quickly the charge stripes melt. 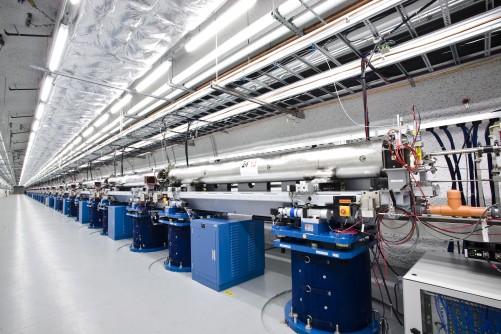 The Undulator Hall of SLAC Lab's Linac Coherent Light Source, which "wiggles" electrons to generate the high-power coherent x-rays crucial to this study.

Newswise — A new study pins down a major factor behind the appearance of superconductivity—the ability to conduct electricity with 100 percent efficiency—in a promising copper-oxide material.

They discovered that so-called "charge stripes" of increased electrical charge melted away as superconductivity appeared. Further, the results help rule out the theory that shifts in the material's atomic lattice hinder the onset of superconductivity.

Armed with this new understanding, scientists may be able to develop new techniques to eliminate charge stripes and help pave the way for room-temperature superconductivity, often considered the holy grail of condensed matter physics. The demonstrated ability to rapidly switch between the insulating and superconducting states could also prove useful in advanced electronics and computation.

The results, from a collaboration led by scientists from the Max Planck Institute for the Structure and Dynamics of Matter in Germany and the U.S. Department of Energy's SLAC and Brookhaven national laboratories, were published in the journal Physical Review Letters.

"The very short timescales and the need for high spatial resolution made this experiment extraordinarily challenging," said co-author Michael Först, a scientist at the Max Planck Institute. "Now, using femtosecond x-ray pulses, we found a way to capture the quadrillionths-of-a-second dynamics of the charges and the crystal lattice. We've broken new ground in understanding light-induced superconductivity."

The compound used in this study was a layered material consisting of lanthanum, barium, copper, and oxygen grown at Brookhaven Lab by physicist Genda Gu. Each copper oxide layer contained the crucial charge stripes.

"Imagine these stripes as ripples frozen in the sand," said John Hill, a Brookhaven Lab physicist and coauthor on the study. "Each layer has all the ripples going in one direction, but in the neighboring layers they run crosswise. From above, this looks like strings in a pile of tennis racquets. We believe that this pattern prevents each layer from talking to the next, thus frustrating superconductivity."

To excite the material and push it into the superconducting phase, the scientists used mid-infrared laser pulses to "melt" those frozen ripples. These pulses had previously been shown to induce superconductivity in a related compound at a frigid 10 Kelvin (minus 442 degrees Fahrenheit).

"The charge stripes disappeared immediately," Hill said. "But specific distortions in the crystal lattice, which had been thought to stabilize these stripes, lingered much longer. This shows that only the charge stripes inhibit superconductivity."

To capture these stripes in action, the collaboration turned to SLAC's LCLS x-ray laser, which works like a camera with a shutter speed faster than 100 femtoseconds, or quadrillionths of a second, and provides atomic-scale image resolution. LCLS uses a section of SLAC's 2-mile-long linear accelerator to generate the electrons that give off x-ray light.

"This represents a very important result in the field of superconductivity using LCLS," said Josh Turner, an LCLS staff scientist. "It demonstrates how we can unravel different types of complex mechanisms in superconductivity that have, up until now, been inseparable."

He added, "To make this measurement, we had to push the limits of our current capabilities. We had to measure a very weak, barely detectable signal with state-of-the-art detectors, and we had to tune the number of x-rays in each laser pulse to see the signal from the stripes without destroying the sample."

The researchers used the so-called "pump-probe" approach: an optical laser pulse strikes and excites the lattice (pump) and an ultrabright x-ray laser pulse is carefully synchronized to follow within femtoseconds and measure the lattice and stripe configurations (probe). Each round of tests results in some 20,000 x-ray snapshots of the changing lattice and charge stripes, a bit like a strobe light rapidly illuminating the process.

To measure the changes with high spatial resolution, the team used a technique called resonant soft x-ray diffraction. The LCLS x-rays strike and scatter off the crystal into the detector, carrying time-stamped signatures of the material's charge and lattice structure that the physicists then used to reconstruct the rise and fall of superconducting conditions.

"By carefully choosing a very particular x-ray energy, we are able to emphasize the scattering from the charge stripes," said Brookhaven Lab physicist Stuart Wilkins, another co-author on the study. "This allows us to single out a very weak signal from the background."

The x-ray scattering measurements revealed that the lattice distortion persists for more than 10 picoseconds (trillionths of a second)—long after the charge stripes melted and superconductivity appeared, which happened in less than 400 femtoseconds. Slight as it may sound, those extra trillionths of a second make a huge difference.

"The findings suggest that the relatively weak and long-lasting lattice shifts do not play an essential role in the presence of superconductivity," Hill said. "We can now narrow our focus on the stripes to further pin down the underlying mechanism and potentially engineer superior materials."

Andrea Cavalleri, Director of the Max Planck Institute, said, "Light-induced superconductivity was only recently discovered, and we're already seeing fascinating implications for understanding it and going to higher temperatures. In fact, we have observed the signature of light-induced superconductivity in materials all the way up to 300 Kelvin (80 degrees Fahrenheit)—that's really a significant breakthrough that warrants much deeper investigations." 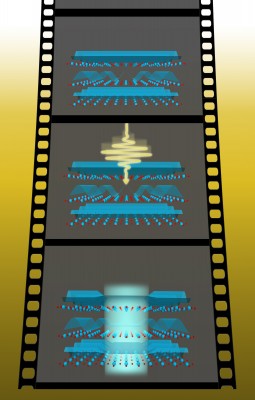 Caption: In equilibrium (top), the charge stripe "ripples" run perpendicular to each other between the copper-oxide layers of the material. When a mid-infrared laser pulse strikes the material (middle), it "melts" these conflicting ripples and induces superconductivity (bottom). The experimenters used a carefully synchronized x-ray laser to take this femtosecond–fast "movie" to reveal how quickly the charge stripes melt. 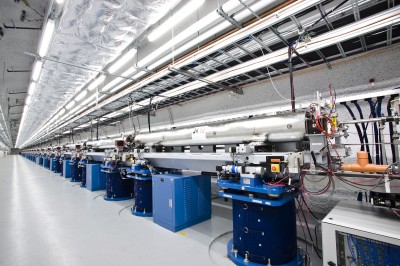