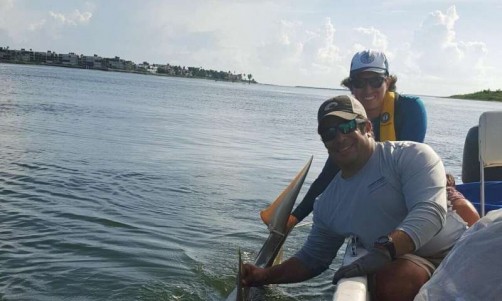 Matt Ajemian, Ph.D., (in the front) co-author and an assistant research professor at FAU’s Harbor Branch and colleague pictured with a critically endangered smalltooth sawfish in the southern Indian River Lagoon in Florida.

Newswise — Many elasmobranch species, which include sharks, skates, and rays, use estuaries as nurseries, for birthing, and as foraging grounds. Florida’s Indian River Lagoon is one of 28 estuaries designated as an “estuary of national significance” by the Environmental Protection Agency’s National Estuary Program. In recent decades, this estuary has experienced many environmental impacts, such as habitat degradation and harmful algal blooms resulting in degraded water quality and fish kills. Currently, there is a substantial data gap surrounding the status of elasmobranchs in this estuary system.

Researchers from Florida Atlantic University’s Harbor Branch Oceanographic Institute conducted a fishery-independent survey to characterize the elasmobranch community and understand distribution patterns and habitat use in the Indian River Lagoon from Sebastian to St. Lucie Inlet. This study provides the first long-term, in-depth analysis of the elasmobranch community in the southern Indian River Lagoon and develops capacity to understand how these species may respond to further environmental changes.

Results of the study, published in Estuaries and Coasts, the journal of the Coastal and Estuarine Research Foundation, showed that many elasmobranchs use the southern Indian River Lagoon throughout their life histories and the area may serve as an important nursery habitat for multiple species.

From 2016 to 2018, researchers caught 630 individuals of 16 species, including two critically endangered smalltooth sawfish (Pristis pectinata). They characterized the species composition and distribution of elasmobranchs, examined spatial and temporal variability in the elasmobranch community, and assessed how temperature, salinity, dissolved oxygen, depth, water clarity, distance to an inlet, and distance to a freshwater source affect elasmobranch community composition. The two most commonly caught species were bull sharks and Atlantic stingrays, the only two species to each comprise greater than 20 percent of the catch. The remaining 14 species comprised 53 percent of the catch.

Researchers also observed size and compositional differences by region and season; for example, bull sharks were most abundant in Vero Beach and the St. Lucie River, and both bull sharks and Atlantic stingrays were more abundant in the fall than in the spring and summer. Clearer, relatively deeper, and higher salinity waters farther from freshwater sources and closer to inlets resulted in a more diverse community; while bull sharks and Atlantic stingrays dominated shallower, less clear waters closer to freshwater sources and further from inlets.

“As global human populations increase and environmental pressures on estuaries become more widespread, it is essential to continue to monitor changes in elasmobranch communities in order to effectively manage and conserve these populations,” said Grace Roskar, M.S., lead author, current Knauss Fellow with NOAA Fisheries and former graduate student working with Matt Ajemian, Ph.D., co-author and an assistant research professor at FAU’s Harbor Branch. “Establishing updated records of the diversity and distribution of elasmobranchs in the Indian River Lagoon is a critical first step to understand how varying environmental and pollution impacts may affect these species, which are integral to the fish community of the lagoon and surrounding habitats.”

The interconnected nature of abiotic parameters such as distance to freshwater sources or inlets and salinity that influenced elasmobranch distributions suggest important implications for future hydrological changes in the Indian River Lagoon.

“If freshwater discharges into the Indian River Lagoon increase in duration and/or volume, the elasmobranch community could shift even further to bull shark and Atlantic stingray dominance. Less tolerant species may be driven closer to the inlets or even out of the estuary to nearshore ocean habitats,” said Ajemian. “These community shifts could result in both decreased elasmobranch diversity and biodiversity of the estuary as a whole, possibly altering the dynamics of prey populations as well. Moreover, displaced species may face increased risks of predation or competition as well as declines in habitat quality or prey availability.”

The researchers emphasize the importance of continuing the survey for additional years to yield greater sample sizes and allow for the formulation of standardized relative abundance indices that will be useful in the stock assessment process, which is essential to fisheries management.