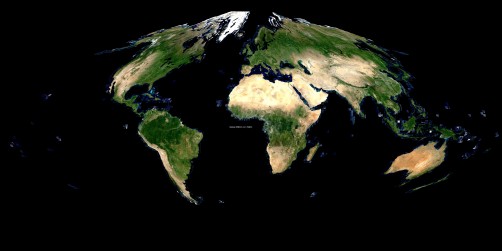 This Global Web-Enabled Landsat Data (WELD) annual composite image is derived from 125,000 Landsat images acquired between December 1999 and November 2000. The data were processed to remove atmospheric scattering and absorption effects and changes in the position of the sun. 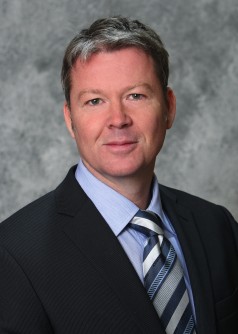 South Dakota State University Professor David Roy, who leads the WELD group at the Geospatial Sciences Center of Excellence, was re-elected as co-leader of the Landsat Science Team for 2018-2023.

Newswise — South Dakota State University Professor David Roy, a senior scientist at the Geospatial Sciences Center of Excellence, was selected to serve on the 2018-2023 Landsat Science team following an international competition sponsored by the U. S. Department of Interior U.S. Geological Survey.  He is a professor in the geography department.

Through the five year, nearly $1.2 million contract, Roy and his group will assess, process and develop near-real-time land surface-monitoring products from Landsat 8 and Sentinel 2 satellite data. This effort builds upon Roy’s previous work on Landsat funded by NASA that developed a new approach for processing and distributing Landsat data. Monthly and annual composites of the global land surface are generated and freely-accessible through the global Web-Enabled Landsat Data (WELD) portal https://globalweld.cr.usgs.gov/.

These products enable scientists, resource managers, government officials, and interested citizens to track the changing face of the landscape in their neighborhood and across the country.  What they learn can provide insight on practices agricultural producers and resource managers can adopt that will help them protect and improve soil and water quality.

“David and his team are a very productive group,” said GSCE Co-director Geoffrey Henebry. “Given his technical expertise, David can identify and solve difficult problems. He and his group have produced several important timely papers on how to use Sentinel 2 and Landsat 8 together.” Sentinel 2 is a pair of European satellites each with a sensor similar to that of Landsat 8.

Part of the challenge is that the sensors and image packaging on the Sentinel and Landsat satellites are different. “Sentinel 2A and 2B have higher spatial resolution and more spectral bands than Landsat, so the data volumes are much larger,” Henebry explained. Each Landsat pixel has 30-meter resolution while Sentinel pixels have 10- and 20-meter resolution. “Trying to put together all the bits and pieces—radiometric, geometric and data packaging—to get them to work together requires a sophisticated technical solution.”

The work Roy and assistant research professors Lin Yan and Hankui Zhang will be doing involves collaboration with the Landsat Science team, engineers and data distribution personnel, as well as U.S Geological Survey and NASA management. As part of the project, Roy’s group of postdoctoral researchers and assistant research professors will use data from Landsat and Sentinel satellites to detect and quantify the many kinds of change in land cover and land use that are occurring across North Dakota, South Dakota, Nebraska, Minnesota and Iowa.

Roy and his team will also work with data from Landsat 9, set to launch in December 2020, and are currently helping to articulate the science requirements for the development of Landsat 10, that is scheduled for launch in 2027.