Two videos. The first, short video shows a two-dimensional slice through the center of an exploding white dwarf star. The lines that form the rings are contours that mark differences in density. The gray tones represent fuel and ash that is enveloping the star. These images were produced in the first three-dimensional computer simulation in which a white dwarf exploded naturally. In previous 3D simulations, the detonation had to be inserted manually. The longer, second video shows the 3D simulation of the exploding white dwarf star. The yellow and orange represent the flame that pops out of the star, while the blue marks the surface of the star. The star is approximately the size of the Earth, but contains a mass greater than the sunâ€™s. The video comes from a simulation that will be presented at the â€œPaths to Exploding Starsâ€ conference on March 22 in Santa Barbara, Calif., by University of Chicago scientists. This work was developed by the U.S. Department of Energy-supported Advanced Simulation and Computing / Alliance Center for Astrophysical Thermonuclear Flashes at the University of Chicago. 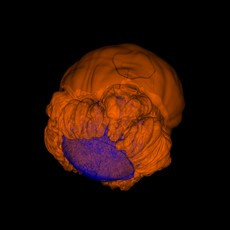 An image from a computer simulation of an exploding white dwarf star. The orange represents the flame that nuclear ash follows as it pops out of the star, while the blue approximately marks the surface of the star. The star is approximately the size of the Earth, but contains a mass greater than the sun's. The image comes from a simulation that will be presented at the "Paths to Exploding Stars" conference on March 22 in Santa Barbara, Calif., by University of Chicago scientists.

Newswise — University of Chicago scientists will demonstrate how to incinerate a white dwarf star in unprecedented detail at the "Paths to Exploding Stars" conference on Thursday, March 22, in Santa Barbara, Calif. White dwarf stars pack one and a half times the mass of the sun into an object the size of Earth. When they burn out, the ensuing explosion produces a type of supernova that astrophysicists believe manufactures most of the iron in the universe. But these type Ia supernovas, as they are called, may also help illuminate the mystery of dark energy, an unknown force that dominates the universe. "That will only be possible if we can gain a much better understanding of the way in which these stars explode," said Don Lamb, Director of the University of Chicago's Center for Astrophysical Thermonuclear Flashes. The Flash Center has been simulating exploding stars since 1997 with funding from the Office of Advanced Simulation and Computing of the National Nuclear Security Administration. Scientists for years have attempted to blow up a white dwarf star by writing the laws of physics into computer software and then testing it in simulations. At first the detonations would only occur if inserted manually into the programs. Then the Flash team naturally detonated white dwarf stars in simplified, two-dimensional tests, but "there were claims made that it wouldn't work in 3D," Lamb said. But in January, the Flash Center team for the first time naturally detonated a white dwarf in a more realistic three-dimensional simulation. The simulation confirmed what the team already suspected from previous tests: that the stars detonate in a supersonic process resembling diesel-engine combustion. Unlike a gasoline engine, in which a spark ignites the fuel, compression triggers ignition in a diesel engine. "You don't want supersonic burning in a car engine, but the triggering is similar," said Dean Townsley, a Research Associate at the Joint Institute for Nuclear Astrophysics at Chicago. The temperatures attained by a detonating white dwarf star makes the 10,000-degree surface of the sun seem like a cold winter day in Chicago by comparison. "In nuclear explosions, you deal with temperatures on the order of a billion degrees," said Flash Center Research Associate Cal Jordan. The new 3D white dwarf simulation shows the formation of a flame bubble near the center of the star. The bubble, initially measuring approximately 10 miles in diameter, rises more than 1,200 miles to the surface of the star in one second. In another second, the flame crashes into itself on the opposite end of the star, triggering a detonation. "It seems that the dynamics of the collision is what creates a localized compression region where the detonation will manifest," Townsley said. This process plays out in no more than three seconds, but the simulations take considerably longer. The Flash Center team ran its massive simulation on two powerful supercomputers at Lawrence Livermore and Lawrence Berkeley national laboratories in California. Just one of the jobs ran for 75 hours on 768 computer processors, for a total of 58,000 hours. "I cannot say enough about the support we received from the high-performance computing teams at Lawrence Livermore and Lawrence Berkeley national laboratories," Lamb said. "Without their help, we would never have been able to do the simulations." The simulations are so demanding—the Flash team calls it "extreme computing" —that they monopolize powerful computers of the national lab during the allocated time. To ensure that these computers are used to their maximum potential, the Flash team stands on alert to rapidly correct any glitches that may arise. "We have it set up so that if something goes wrong, text messages are sent out instantaneously to everyone," said Flash Center Research Scientist Robert Fisher. "It's like being a doctor on call 24/7." But the scientific payoff for logging these long, stressful hours is potentially huge. Astrophysicists value type Ia supernovas because they all seem to explode with approximately the same intensity. Calibrating these explosions according to their distance reveals how fast the universe has been expanding at various times during its long history. In the late 1990s, supernova measurements revealed that the expansion of the universe is accelerating. Not knowing what force was working against gravity to cause this expansion, scientists began calling it "dark energy." The Flash Center simulations may help astrophysicists make better calibrations to adjust for the minor variation that they believe occurs from one supernova to the next. "To make extremely precise statements about the nature of dark energy and cosmological expansion, you have to be able to understand the nature of that variation," Fisher said. Telescopic images of the two supernovas closest to Earth seem match the Flash team's findings. The images of both supernovas show a sphere with a cap blown off the end. "In our model, we have a rising bubble that pops out of the top. It's very suggestive," Jordan said. Support for the simulations to be presented at Santa Barbara was provided by two separate DOE programs: the Advanced Simulation and Computing program of the National Nuclear Security Administration, which has provided funding and computer time to the Flash Center for nearly a decade, and INCITE (Innovative and Novel Computation Impact on Theory and Experiment) of the Office of Science, which has provided computer time.

This finding is likely to be controversial. Opposition is likely to come from Stan Woosley, UC Santa Clara, and Wolfgang Hillebrandt of the max Plank Institute for Astrophysics in Germany. They, along with astronomers who can address how the Chicago simulation matches observations, will all be at the Paths to Exploding Stars conference with Don this week in Santa Barbara.