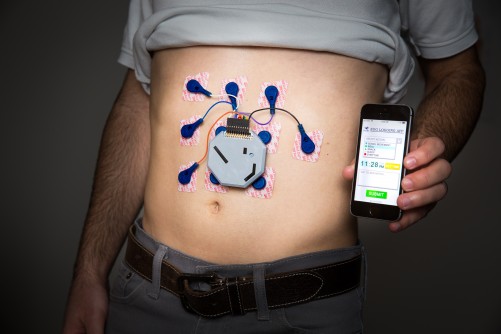 Researchers have developed a wearable system to monitor stomach activity that performs as well as current state of the art methods but can be used outside of a clinical setting. The system also comes with an app that allows patients to log their meals, sleep and other activities. 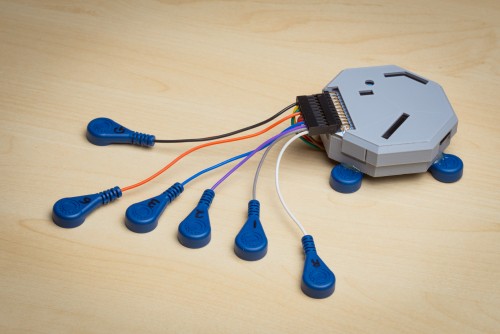 The system is made up of a custom circuit board, a battery and off-the-shelf electrodes. 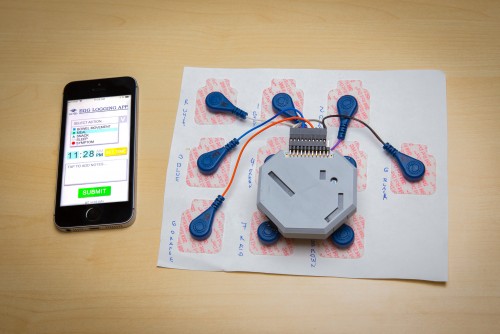 The system with electrodes and its accompanying app.

Newswise — San Diego, Calif., March 22, 2018 -- A team of researchers has developed a wearable, non-invasive system to monitor electrical activity in the stomach over 24 hours—essentially an electrocardiogram but for the gastro-intestinal (GI) tract.

Applications include monitoring GI activity for patients outside of a clinical setting, which cuts down costs. Monitoring for longer periods of time also increases the likelihood of capturing abnormal events.

The team tested the device, a 3D printed portable box connected to 10 small wearable electrodes, on 11 children and one adult volunteer. They found that data collected with the wearable system were comparable to data collected in the clinic with state-of-the-art methods, which are invasive--including a catheter inserted through the patient’s nose. They also found that the stomach’s electrical activity changes not only around meals, but also during sleep, following its own circadian rhythm.

“We think our system will spark a new kind of medicine, where a gastroenterologist can quickly see where and when a part of the GI tract is showing abnormal rhythms and as a result make more accurate, faster and personalized diagnoses,” said Armen Gharibans, the paper’s first author and a bioengineering postdoctoral researcher at the University of California San Diego.

“This work opens the door accurately monitoring the dynamic activity of the GI system,” he said. “Until now, it was quite challenging to accurately measure the electrical patterns of stomach activity in a continuous manner, outside of a clinical setting. From now on, we will be able to observe patterns and analyze them in both healthy and unwell people as they go about their daily lives.”

Physicians involved with the study say the device meets an unmet clinical need.

“This will help us determine if the stomach is functioning properly during meals and - most importantly - when patients are experiencing symptoms such as nausea and belly pain,” said Dr. David Kunkel, one of the paper’s co-authors and a gastroenterologist at UC San Diego Health.

The breakthrough was made possible because engineers and physicians came together to work on the problem, said Benjamin Smarr, one of the paper’s co-authors and a chronobiologist at UC Berkeley.

Researchers harnessed the signal processing expertise in Coleman’s research group to develop a sophisticated algorithmic pipeline that can clean up the data and separate out abdominal muscle activity (for example when a person walks), heart beats and gastric activity, into different bands of signals that do not overlap. As a result, clinicians can examine each signal individually and compare it to others.

The device and testing

The device itself uses off-the-shelf electrodes used in electrocardiograms. The electronics and battery are encased in a 3D printed box and connected to the electrodes, which fit on a person’s abdomen just over the stomach.

The researchers worked with Dr. Hayat Mousa and tested the device on 11 pediatric patients at Rady Children’s Hospital in San Diego. These patients had been undergoing an invasive procedure called manometry, one of a couple clinical gold standards for objectively monitoring GI tract activity. The procedure requires using a catheter inserted through the nose to measure pressure at several points inside the stomach.  Comparing the two methods showed that data collected by the wearable device was robust and reliable.

“I have been practicing pediatric gastroenterology and taking care of patients for 20 years," Dr. Mousa said.  "The only method to assess gastrointestinal motility involves placing motility catheters in the GI tracts while kids are sedated or under general anesthesia. It has been a long journey discussing the benefits of doing such an invasive procedure with my patients and their families. My challenge has always been finding a test that offers a non-invasive assessment of the enteric nervous system and its connection with brain function."

"The technique outlined in this paper is the best way to evaluate children with motility and functional GI disorders," Dr. Mousa added. "It provides the information without need for sedation and it offers the flexibility to monitor kids while they continue their daily activities. This procedure allows convenience without compromising accuracy. In addition, it offers the option to assess the brain-gut response to therapeutic interventions including biofeedback and neuromodulation."

The system is currently paired with a smart phone app that allows patients to log their meals, sleep and other activities. The long-term goal is to design an app that would allow patients and physicians to see the data collected by the device in real time.

“This is analogous to going from switchboard operators straight to smart phones for gastroenterology,” Smarr said.

GI problems, such as delayed emptying of the stomach, are common in patients with diabetes and Parkinson's.  This technology could improve the management of these conditions.

Healthy people could also benefit from using the device. For example, competitive athletes and their coaches could monitor GI activity to figure out the best time for meals, especially while traveling across different time zones. Pregnant women suffering from heartburn and other GI problems could use it to monitor the stomach’s activity before, during and after meals, as would the elderly.

“Changes to digestion and gastric health are hallmarks of two understudied processes: aging and pregnancy,” UC Berkeley’s Smarr said. “One of our hopes is that this technology will allow us to quantify the changes that happen during these critical periods in life. They affect the vast majority of humanity, and will now be possible to study what’s going on, and build predictive, personal medical applications based on getting ahead of bad changes.”

The research was funded by Larry Smarr, UC San Diego Professor in the Department of Computer Science and Engineering and founding director of the California Institute for Telecommunications and Information Technology (or Calit2), through his Harry E. Gruber endowed chair funds.

“This pioneering research has the promise to bring to gastroenterology the kind of diagnostic insights that electrocardiograms have brought to cardiovascular medicine,” UC San Diego’s Smarr said.

The project is a collaboration between bioengineers at UC San Diego, clinicians at Rady Children’s Hospital and the UC San Diego School of Medicine, and neuroscientists at UC Berkeley. Based upon his Ph.D. work on this topic, Gharibans has been recognized as a Siebel Scholar, an award that recognizes exceptional students at the world’s leading graduate schools of business, computer science, and bioengineering and provides them with a financial award for their final year of studies.

To learn more about this work, visit the team’s website at gi2.ucsd.edu.