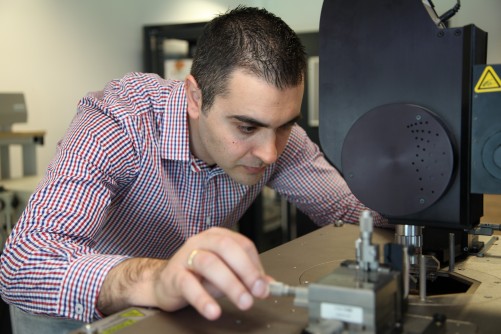 Newswise — Scientists at the University of Southampton have discovered a way of enhancing the capabilities of an emerging nanotechnology that could open the door to a new generation of electronics.

In a study published in the journal Scientific Reports, researchers show how they have pushed the memristor – a simpler and smaller alternative to the transistor, with the capability of altering its resistance and storing multiple memory states – to a new level of performance after experimenting with its component materials.

Traditionally, the processing of data in electronics has relied on integrated circuits (chips) featuring vast numbers of transistors – microscopic switches that control the flow of electrical current by turning it on or off.

Transistors have got smaller and smaller in order to meet the increasing demands of technology, but are now reaching their physical limit, with – for example – the processing chips that power smartphones containing an average of five billion transistors.

Memristors could hold the key to a new era in electronics, being both smaller and simpler in form than transistors, low-energy, and with the ability to retain data by ‘remembering’ the amount of charge that has passed through them – potentially resulting in computers that switch on and off instantly and never forget.

The University of Southampton team has demonstrated a new memristor technology that can store up to 128 discernible memory states per switch, almost four times more than previously reported.

In the study, they describe how they reached this level of performance by evaluating several configurations of functional oxide materials – the core component that gives the memristor its ability to alter its resistance

Themis Prodromakis, Professor of Nanotechnology and EPSRC Fellow at the University of Southampton, said: “This is a really exciting discovery, with potentially enormous implications for modern electronics. By 2020 there are expected to be more than 200 billion interconnected devices within the Internet of Things framework – these will generate an incredible amount of data that will need processing.

“Memristors are a key enabling technology for next-generation chips, which need to be highly reconfigurable yet affordable, scalable and energy-efficient.

“We are thrilled to be working with world-leading industry, bringing innovations into new electronic systems that require bespoke customisation. Such examples include systems that are employed in inaccessible environments; for example, inside the human body, space or other remote or harsh locations.

“At the same time this technology is ideal for developing novel hardware that can learn and adapt autonomously, much like the human brain.”

The research was supported by the Engineering and Physical Sciences Research Council (EPSRC) and the Royal Society.

2)        The University of Southampton drives original thinking, turns knowledge into action and impact, and creates solutions to the world’s challenges. We are among the top one per cent of institutions globally. Our academics are leaders in their fields, forging links with high-profile international businesses and organisations, and inspiring a 24,000-strong community of exceptional students, from over 135 countries worldwide. Through our high-quality education, the University helps students on a journey of discovery to realise their potential and join our global network of over 200,000 alumni. www.southampton.ac.uk