Scientists develop sensor to save children, pets left in vehicles 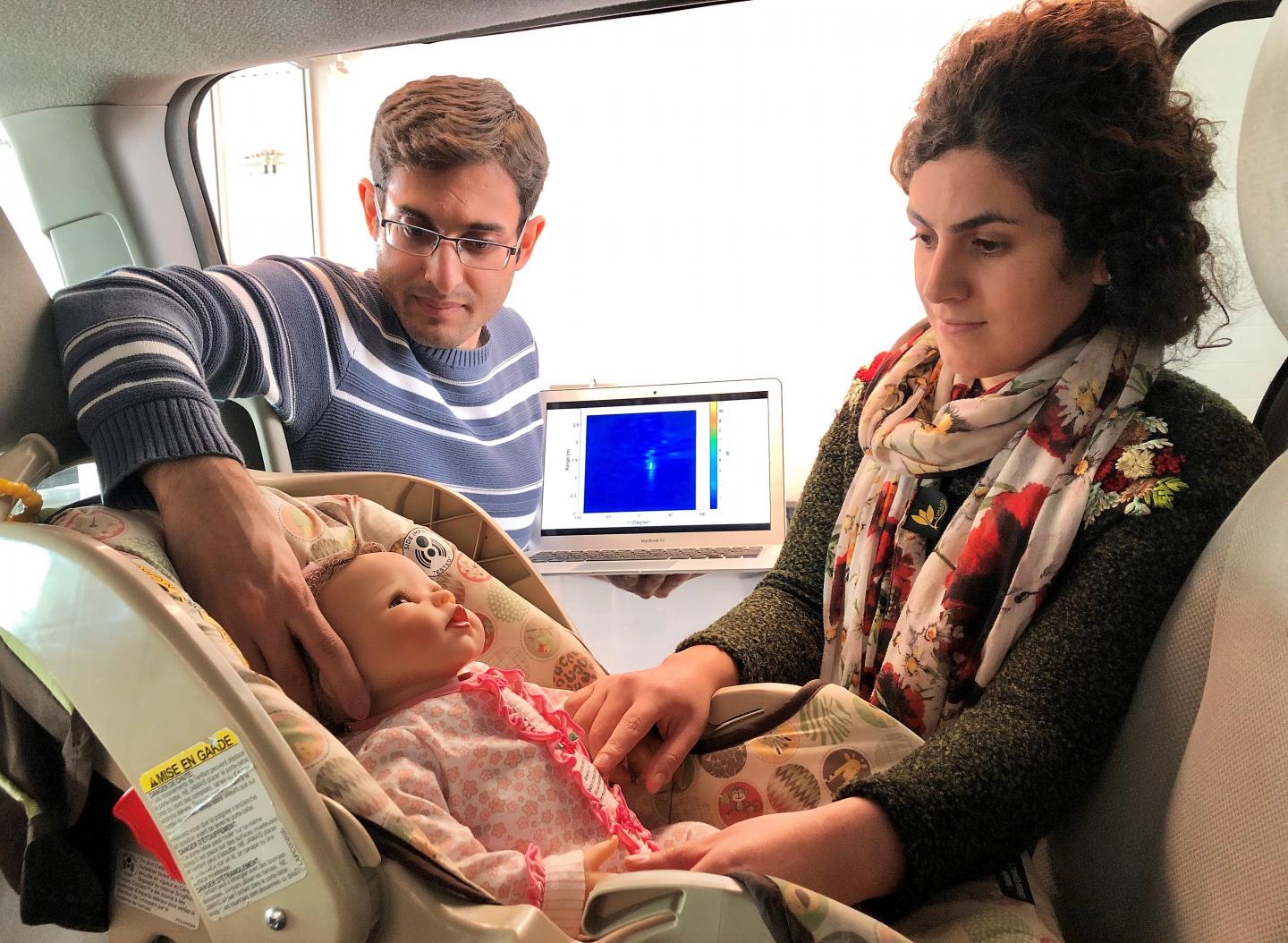 Graduate students Mostafa Alizadeh, left, and Hajar Abedi position a doll, modified to simulate breathing, in a minivan during testing of a new sensor.

Newswise — A small, inexpensive sensor could save lives by triggering an alarm when children or pets are left alone in vehicles.

The new device, developed by researchers at the University of Waterloo, combines radar technology with artificial intelligence (AI) to detect unattended children or animals with 100-per-cent accuracy.

Small enough to fit in the palm of a hand at just three centimetres in diameter, the device is designed to be attached to a vehicle's rear-view mirror or mounted on the ceiling.

It sends out radar signals that are reflected back by people, animals and objects in the vehicle. Built-in AI then analyzes the reflected signals.

"It addresses a serious, world-wide problem," said George Shaker, an engineering professor at Waterloo. his system is so affordable it could become standard equipment in all vehicles."

Development of the wireless, disc-shaped sensor was funded in part by a major automotive parts manufacturer that is aiming to bring it to market by the end of 2020.

Analysis by the device determines the number of occupants and their locations in a vehicle. That information could be used to set rates for ride-sharing services and toll roads, or to qualify vehicles for car-pool lanes.

Its primary purpose, however, is to detect when a child or pet has been accidentally or deliberately left behind, a scenario that can result in serious harm or death in extremely hot or cold weather.

In such cases, the system would prevent vehicle doors from locking and sound an alarm to alert the driver, passengers and other people in the area that there is a problem.

"Unlike cameras, this device preserves privacy and it doesn't have any blind spots because radar can penetrate seats, for instance, to determine if there is an infant in a rear-facing car seat," said Shaker, a cross-appointed professor of electrical and computer engineering, and mechanical and mechatronics engineering.

The low-power device, which runs on a vehicle's battery, distinguishes between living beings and inanimate objects by detecting subtle breathing movements.

Researchers are now exploring the use of that capability to monitor the vital signs of drivers for indications of fatigue, distraction, impairment, illness or other issues.

A paper on their project, Low-cost low-power in-vehicle occupant detection with mm-wave FMCW radar, was recently presented at an international conference in Montreal.