Findings could influence how humans control for mosquitoes in cities 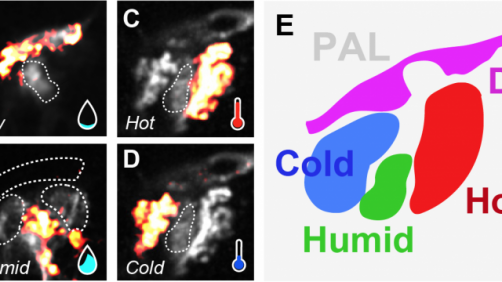 Fluorescent molecules light up conversations between neurons in the fruit fly’s brain as it experiences hot, cold, humid or dry stimuli.

Newswise — EVANSTON - Northwestern University neuroscientists now can visualize how fruit flies sense and process humidity and temperature together through a “sensory map” within their brains, according to new research.

The findings could one day help researchers better understand how the human brain simultaneously processes humidity and temperature and might influence how humans control for mosquitoes in cities and prevent mosquito-borne diseases.

The study was published today (July 20) in the journal Current Biology.

“We know very little about how temperature and humidity are represented in the human brain,” said senior author Marco Gallio, assistant professor of neurobiology in Northwestern’s Weinberg College of Arts and Sciences. “This study demonstrates that the fruit fly brain contains a combined sensory map for temperature and humidity. We show how the fly’s brain reads this map to lead it away from dangerous hot and dry conditions.”

The fruit fly is a major model system for the genetics of sensory behavior, including human behavior.

The ability to process humidity in the brain together with temperature is imperative for the survival of fruit flies, which need warm, humid environments to thrive, and helps them make sensible behavioral choices to avoid hot, dry areas.

The study builds upon previous research in which Northwestern neuroscientists developed a new tool that uses fluorescent molecules to light up conversations between neurons in the fruit fly’s brain to visualize when they’re experiencing hot or cold stimuli. This new study sought out where humidity is represented in the fruit fly’s brain to test that additional environmental element.

Fruit flies can detect changes in external humidity through a sophisticated “triad” of neurons located in their antenna that respond to humid, dry and cool stimuli, the research found. These neurons target a region of the brain that is also innervated by receptors for hot and cold temperature, which reside somewhere else in the antenna.

The scientists restrained individual fruit flies under a microscope and controlled the level of humidity and temperature of the air flowing over their antennae. Meanwhile, they measured what was happening in this target region in the brain using genetically engineered flies in which neuronal conversations light up under a microscope. A puff of dry air lit up the neuron in the fly’s brain that reads dry stimuli. A puff of humid air spurred activity in the humid neurons. The intensity of the stimuli (how dry, humid, hot or cold it was) changed how bright the neuron became.

“Neurons that measure temperature and humidity converge in the brain, but there is a physical separation of activity, which we can see by looking as neurons light up,” Gallio said. “Hot, cold, dry and wet light up different physical locations within this sensory map.”

Most interestingly, the scientists discovered that this map functions as a switchboard, so that neurons in the brain can connect at different locations to read one or more of the signals. Some neurons – narrowly tuned neurons – only read individual stimuli (just hot or just wet), while other neurons – broadly tuned neurons – can sample multiple stimuli at once (hot and dry).

Fruit flies are small and desiccate easily. When given a choice, they avoid dry heat much more than humid heat. The scientist reproduced this in the lab in a sophisticated chamber in which they controlled the level of humidity and temperature with puffs of air and heated floor tiles, respectively.

Brain circuit responds to both hot and dry, guides fruit flies away from danger of desiccation

“When we knocked out the neuron that helps the fly recognize dry air, the fruit flies lost their ability to determine the combined danger of hot and dry and avoided dry heat just as much as they avoided the humid heat,” Gallio said.

The scientists discovered a single type of broadly tuned brain neuron that simultaneously receives signals from both dry and hot sensors, explaining how flies steer away from this particularly dangerous combination.

Why would a fruit fly brain need such broadly tuned hot/dry neurons? One hypothesis, Gallio said, is that dry and hot are often found together in the environment, so it makes sense that they would be processed together.

“This neuron would be ideally positioned to summate the negative signals from dry and hot to make sure they get out of that environment as quickly as possible,” Gallio said.

The organization of the sensory triad of neurons is similar to what has been described in other insects, suggesting that other insects, such as the mosquito, might sense external humidity in the same manner as the fruit fly.

Ability to process humidity, temperature together could provide insight into human brains

“It’s not a big leap to think that mosquitoes might use the same strategies to navigate their environment,” Gallio said. “One of the ways we’re trying to control the major issue of mosquito-borne diseases is to mess with their brains.”

Mosquitoes use temperature to find their prey, and they also like to lay their eggs in water, Gallio explained. As an example, he said scientists could screen in the lab for compounds that target a mosquito’s humidity receptor. A drop of that compound in the open water of an urbanized area may lead the mosquito to ignore that body of water when searching for a suitable place to lay its eggs.

The paper is titled “Early integration of temperature and humidity stimuli in the Drosophila brain.”

Funding for the study was provided by the National Institutes of Health (NIH) grant R01NS086859, the Pew Charitable Trust and NIH grant F31NS093873.

In addition to Gallio, other authors of the paper are Dominic D. Frank (first author), Emanuela E. Zaharieva, Genevieve C. Jouandet and Alessia Para of Northwestern; and Anders Enjin and Marcus C. Stensmyr of Lund University.