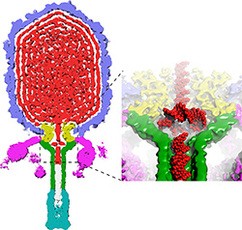 Credit: Jinghua Tang/UCSD Usage restrictions: for use in news reports of this research only (or similar language)

A donut-shaped twist, or toroid, of DNA (shown in red) wedges the viral genome tightly within the protein envelope of the bacteriophage.

Newswise — A novel twist of DNA may keep viral genes tightly wound within a capsule, waiting for ejection into a host, a high-resolution analysis of its structure has revealed.

Using electron microscopy and three-dimensional computer reconstruction, UC San Diego biologists and chemists have produced the most detailed image yet of the protein envelope of an asymmetrical virus and the viral DNA packed within, they report this week in the journal Structure. The image, with a resolution of less than a nanometer, or a millionth of a millimeter, will help to unravel how the virus locks onto its host and infects the cells by injecting its DNA.

By assembling more than 12,000 microscopic views of frozen viral particles from different angles, UCSD chemists Jinghua Tang, Norman Olson and Timothy Baker, a professor of chemistry and biological sciences, have determined the structure of a bacteriophage called phi29 with a resolution finer than 8 Angstroms (one Angstrom equals a tenth of a nanometer). Their project was part of a long-term collaboration with molecular virologist Dwight Anderson and his colleagues at the University of Minnesota.

Although the structures of spherical viruses with a high degree of symmetry have been resolved using similar methods, many more images were required to accomplish the same task for the head-and-tail shape of phi29. The UCSD scientists said their images of phi29 are twice as fine as those created in previous efforts to visualize viruses with a similar shape.

A comparison between images of the virus with and without its DNA cargo revealed that the DNA twists tightly into a donut shape, or toroid, in the neck of the virus between its head and tail. "This highly distorted DNA structure is unlike anything previously seen or even predicted in a virus," said Timothy Baker who headed the research team. "It's an improbably tight turn for DNA, which is generally considered inflexible over very small distances."

During assembly of the virus, a molecular motor in the neck winds the DNA strand into a tight coil within the head. "It's under tremendous pressure -- about 20 times that of champagne in a bottle," said Tang, the lead author of the paper.

The knot-like shape of the toroid, along with interlocking bumps in the protein envelope, may keep the DNA wedged into the capsid until the virus docks onto the host cell.

"It's poised in this tube waiting to go through the bacterial wall," Baker said. "All of the components work together to create an infection machine."