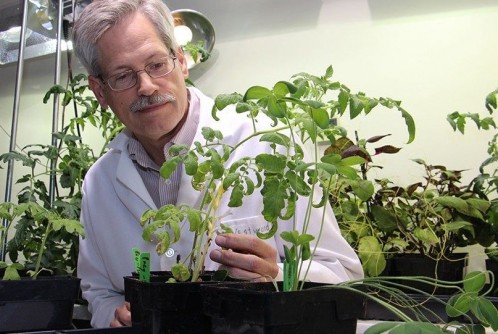 Dodder, a parasitic plant that levies millions of dollars’ worth of damage on crops each year is a stealthy invader with the ability to wage war on the genes of its host plants. The assailant utilizes a highly sophisticated method of disarming its victims involving cross-species gene manipulation that has never before been seen from a parasitic plant. Understanding dodder’s covert communications weaponry system, which operates much like a computer virus, could provide researchers with a method to engineer parasite-resistant plants.

A paper describing the research by a team of scientists from Virginia Tech and Penn State appeared this week in the journal Nature.

“The big news is that we now have evidence of a function for RNA that is being exchanged between dodder and its quarry,” said Jim Westwood, professor of plant pathology, physiology, and weed science in Virginia Tech’s College of Agriculture and Life Sciences, an author of the paper.

“We had previously learned that messenger RNA, a nucleic acid present in all living cells whose primary role is to act as a messenger carrying instructions from DNA, moves between parasitic plants and their hosts, but we have yet to discover the significance of this exchange. But when we looked at microRNA, we found that dodder also passes this chopped-up form of RNA into its prey, which then exerts control over the host’s genetic expression.

"Imagine a battle between host and parasite. In this case, dodder is trying to hack into the host’s information system and the host is trying to shut it off. MicroRNAs are a new class of weapon being used in the warfare,” he said.

MicroRNAs are short bits of nucleic acid — the material of DNA and RNA — that can bind to messenger RNAs that code for protein because they have a complimentary sequence of A, U, C and G. This binding of microRNA to messenger RNA prevents the protein from being made, either by blocking the process directly or by triggering other proteins that cut the messenger RNA into smaller pieces. Importantly, the small remnants of the messenger RNA can then function like additional microRNAs, binding to other copies of the messenger RNA, causing further gene silencing.

The team found that microRNAs have a more powerful function than previously believed. The scientists investigated the parasite’s microRNAs as they entered the host and discovered that microRNAs are shutting off specific genes in the host plant. Evidence points to the fact that these targeted genes are the same genes a parasite would need to silence in order to establish dominance.

“Host-parasite interaction involves the use of microRNAs as messengers of doom. They are hijacking information from the host,” said Westwood, who is affiliated with the Fralin Life Science Institute. “We don’t yet know how they are being exchanged in terms of the mechanism, but it seems that many different organisms, including plants, fungi and insects, are using microRNAs as remote signals against other organisms. In these cases, the pathogen is sending microRNAs to shut down the host’s defenses. Likewise, the host is shooting its own microRNAs into the pathogen. MicroRNAs are a new class of weapon being used in the warfare.”

This research builds on previous studies by Westwood. The first, published in August 2014 in Science magazine, presented the discovery of a novel form of inter-organism communication using messenger RNA, showing that plants share an extraordinary amount of genetic information with one another. The second, published in November 2016in the Proceedings of the National Academy of Sciences, presented the discovery that parasitic weeds may be able to steal genes from their prey and then use those genes against the host plant.

When a plant is attacked by a parasite it initiates a number of defense mechanisms. In one of these mechanisms, similar to blood clotting after a cut, the plants produce a protein that clots the flow of nutrients to the site of the parasite. MicroRNA from dodder targets the messenger RNA that codes for this protein, which then helps to maintain a free flow of nutrients to the parasite. The gene that codes for this clotting protein has a very similar sequence across many plant species, and the researchers showed that the microRNA from dodder targets regions of the gene sequence that are the most highly conserved across plants. Because of this, dodder can probably silence this clotting protein in, and therefore parasitize, a wide variety of plant species.

The researchers sequenced all of the small RNAs in tissue from the parasite alone, the host plant alone, and a combination of two. By comparing the sequencing data from these three sources, they were able to identify microRNAs from dodder that had entered the plant tissue. They then measured the amount of messenger RNA of genes that were targeted by the dodder microRNAs and saw that the level of messenger RNA from the host was reduced when the dodder microRNAs were present.

“Along with previous examples of small RNA exchange between fungi and plants, our results imply that this cross-species gene regulation may be more widespread in other plant-parasite interactions,” said Michael J. Axtell, professor of biology at Penn State and an author of the paper. “So, with this knowledge, the dream is that we could eventually use gene editing technology to edit the microRNA target sites in the host plants, preventing the microRNAs from binding and silencing these genes. Engineering resistance to the parasite in this way could reduce the economic impact of the parasite on crop plants.”

In addition to Westwood and Axtell, the research team included Gunjune Kim, a former post-doctoral student from Chicago and Vivian Bernal-Galeano, a graduate student from Colombia, at Virginia Tech; Saima Shahid, Nathan R. Johnson, Eric Wafula, Feng Wang, Ceyda Coruh, and Claude W. dePamphilis at Penn State; and Tamia Phifer at Knox College. The research was funded by the U.S. National Science Foundation and the U.S. National Institute of Food and Agriculture. Additional support was provided by the Penn State Huck Institutes of the Life Sciences.