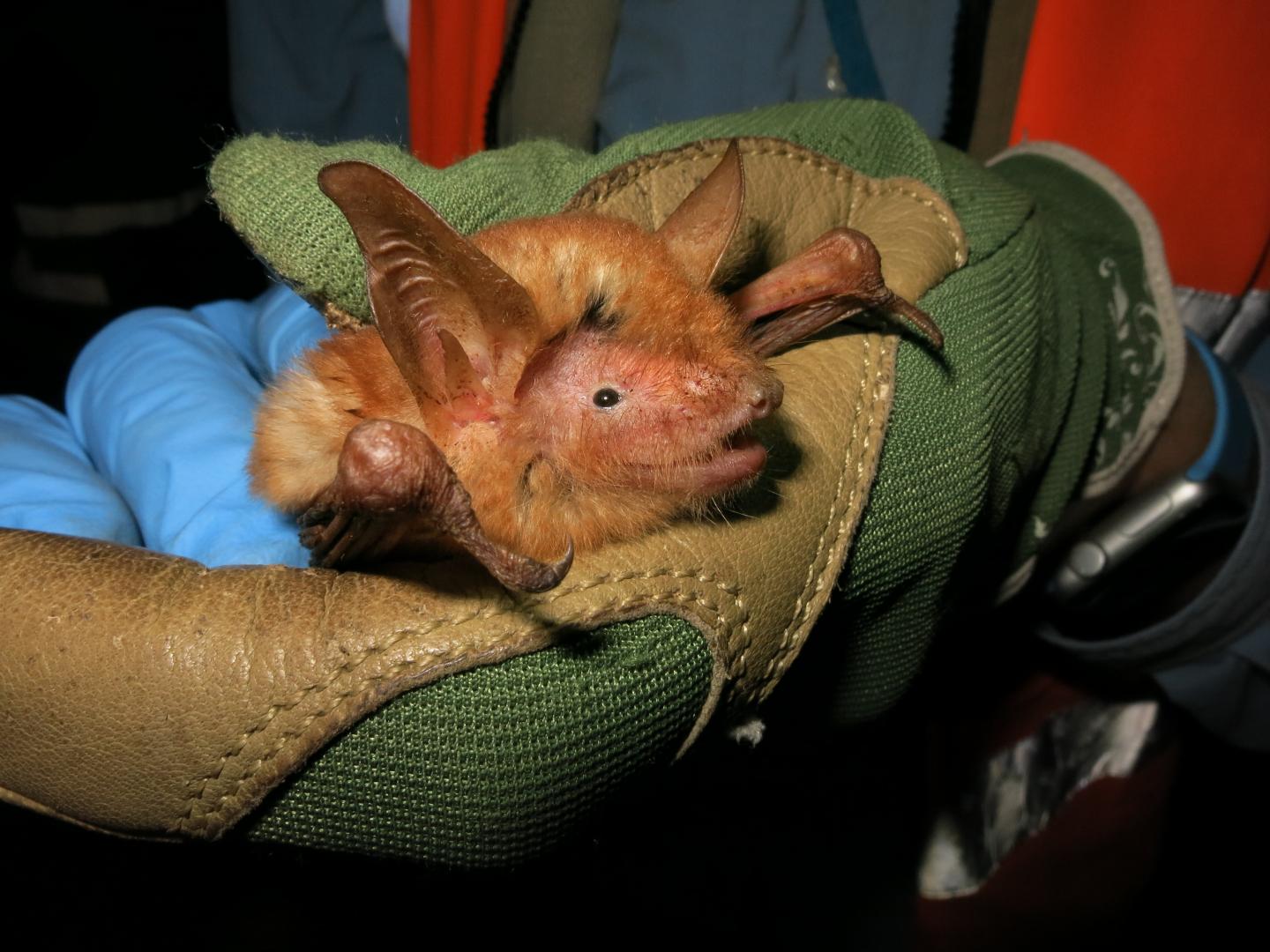 Myotis nimbaensis, shown here, is a new species of bat named for the mountain range in which it is found, the Nimba Mountains in West Africa. 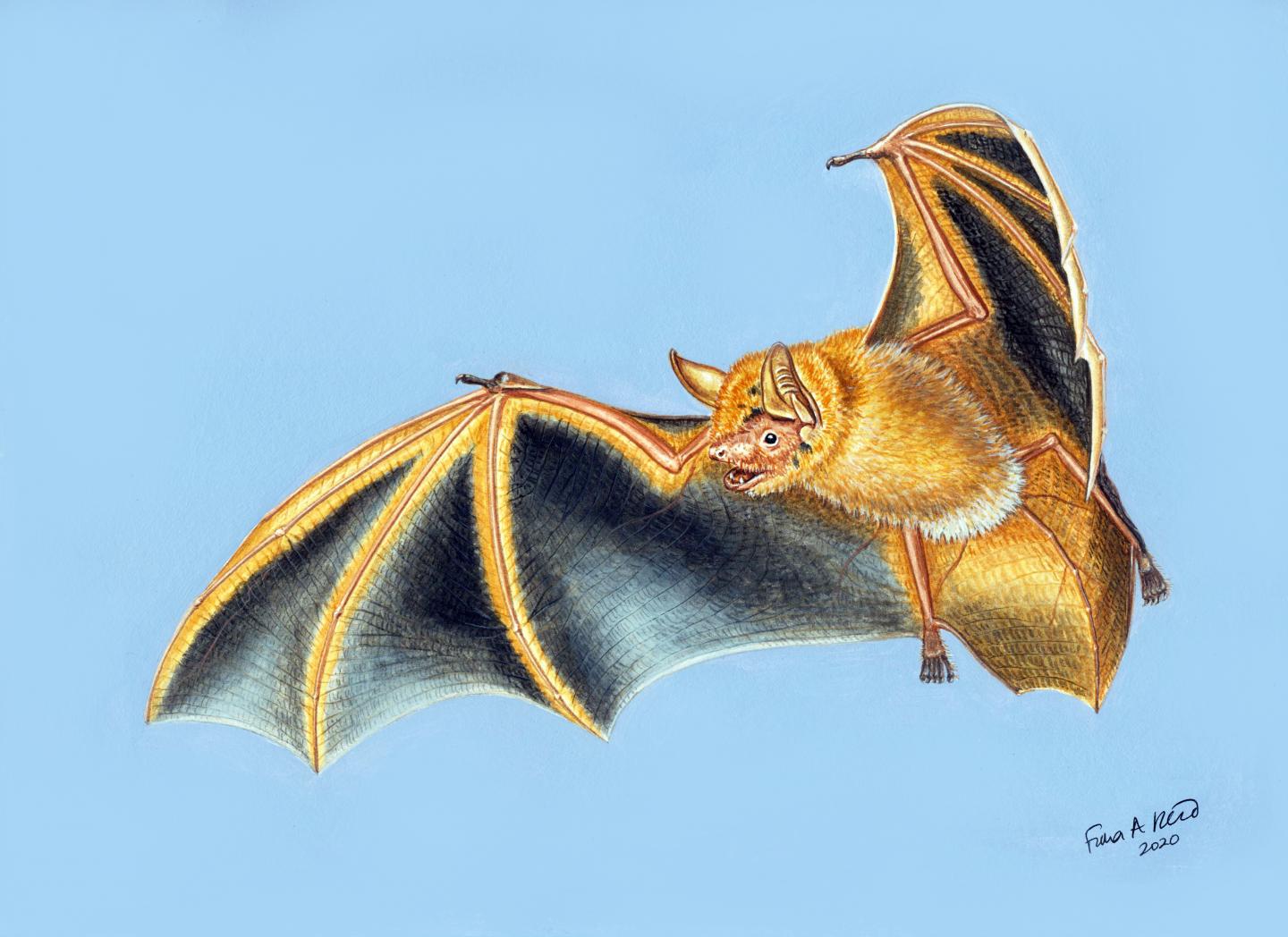 This illustration shows Myotis nimbaensis, a new species of bat found in the Nimba Mountains of West Africa. 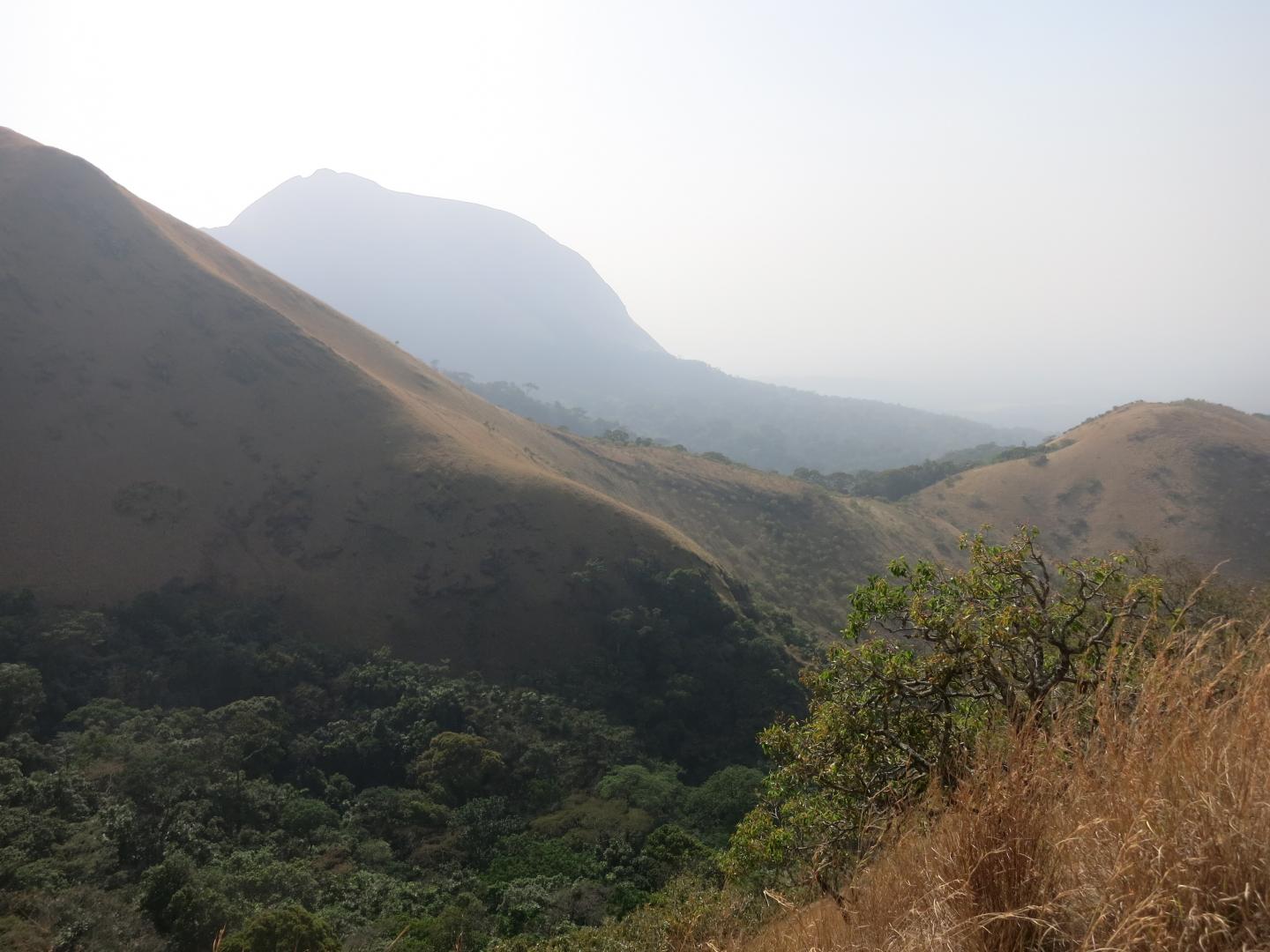 A chain of "African sky islands," the Nimba Mountains in Guinea have peaks rising between 1,600-1,750 meters (about 1 mile) above sea level and are surrounded by drastically different lowland habitats. They are home to exceptional biodiversity, including bats.

Newswise — A group of scientists led by the American Museum of Natural History and Bat Conservation International have discovered a new species of a striking orange and black bat in a mountain range in West Africa. The species, which the researchers expect is likely critically endangered, underscores the importance of sub-Saharan "sky islands" to bat diversity. The species is described today in the journal American Museum Novitates.

"In an age of extinction, a discovery like this offers a glimmer of hope," said Winifred Frick, chief scientist at Bat Conservation International and an associate research professor at the University of California, Santa Cruz. "It's a spectacular animal. It has this bright-orange fur, and because it was so distinct, that led us to realize it was not described before. Discovering a new mammal is rare. It has been a dream of mine since I was a child."

In 2018, Frick and her colleagues at Bat Conservation International and the University of Maroua in Cameroon were in the Nimba Mountains in Guinea conducting field surveys in natural caves and mining tunnels, known as adits, that were built in the 1970s and 1980s and have since been colonized by bats. In collaboration with the local mining company, Société des Mines de Fer de Guinée (SMFG), the scientists are trying to understand which bat species use which adits and at what times of the year. Of particular interest is Lamotte's roundleaf bat, Hipposideros lamottei, which is listed by the International Union for Conservation of Nature (IUCN) as critically endangered and has only ever been recorded in the Nimba Mountains. Much of its known population lives in the adits, which are in different states of collapse and will disappear in time. While surveying for this bat, the researchers found something peculiar--a bat that looked nothing like Lamotte's roundleaf bat and did not match the descriptions of any other species that they knew occurred in the area. Later that night, they called on American Museum of Natural History Curator Nancy Simmons, a bat expert and chair of the Museum's Department of Mammalogy, for help.

"As soon as I looked at it, I agreed that it was something new," said Simmons, the lead author of the paper and Bat Conservation International Board member. "Then began the long path of documentation and gathering all the data needed to show that it's indeed unlike any other known species."

Through morphological, mor¬phometric, echolocation, and genetic data, including comparative data from collections at the Museum, the Smithsonian National Museum of Natural History, and the British Museum, the scientists described the new species, which they named Myotis nimbaensis ("from Nimba") in recognition of the mountain range in which it is found. A chain of "African sky islands," the Nimba Mountains have peaks rising between 1,600-1,750 meters (about 1 mile) above sea level and are surrounded by drastically different lowland habitats. As such, they are home to exceptional biodiversity, including bats.

"In addition to the Lamotte's roundleaf bat, it's possible Myotis nimbaensis could be the second bat species found only in this particular mountain range," said Jon Flanders, Bat Conservation International's director of endangered species interventions.

This study is part of an ongoing effort critical in helping the Nimba Mountain bats survive. Bat Conservation International and SMFG have already started working together to build new tunnels, reinforced to last for centuries and in habitat away from the mining project, for the Lamotte's roundleaf bat. And although little is known yet about the population and range of Myotis nimbaensis, efforts like this will likely help it as well.

Other authors on the study include Eric Moïse Bakwo Fils from the University of Maroua; Guy Parker, Jamison Suter, and Seinan Bamba from SMFG; Mory Douno from the Ministry of the Environment, Water, and Forests in Guinea; Mamady Kobele Keita from Guinée Ecologie; and Ariadna Morales from the American Museum of Natural History and the Max Planck Institute of Molecular Cell Biology and Genetics, Dresden, Germany.

ABOUT THE AMERICAN MUSEUM OF NATURAL HISTORY (AMNH)

The American Museum of Natural History, founded in 1869 and currently celebrating its 150th anniversary, is one of the world's preeminent scientific, educational, and cultural institutions. The Museum encompasses more than 40 permanent exhibition halls, including those in the Rose Center for Earth and Space, as well as galleries for temporary exhibitions. The Museum's approximately 200 scientists draw on a world-class research collection of more than 34 million artifacts and specimens, some of which are billions of years old, and on one of the largest natural history libraries in the world. Through its Richard Gilder Graduate School, the Museum grants the Ph.D. degree in Comparative Biology and the Master of Arts in Teaching (MAT) degree, the only such free-standing, degree-granting programs at any museum in the United States. The Museum's website, digital videos, and apps for mobile devices bring its collections, exhibitions, and educational programs to millions around the world. Visit amnh.org for more information.

Founded in 1982, Bat Conservation International has grown into a global conservation organization dedicated to ending bat extinctions. Working together, our goal is to redefine what is possible in global conservation, through the utilization of cutting-edge tools, technology, and training to create a real, measurable impact. For more information, visit batcon.org.

Caption: Myotis nimbaensis, shown here, is a new species of bat named for the mountain range in which it is found, the Nimba Mountains in West Africa.

Caption: This illustration shows Myotis nimbaensis, a new species of bat found in the Nimba Mountains of West Africa.

Caption: A chain of "African sky islands," the Nimba Mountains in Guinea have peaks rising between 1,600-1,750 meters (about 1 mile) above sea level and are surrounded by drastically different lowland habitats. They are home to exceptional biodiversity, including bats.