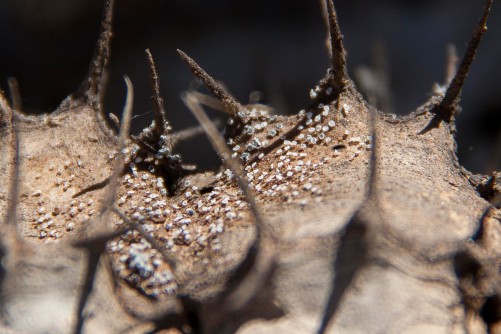 Fruiting bodies of a myxomycete (small round white structures) on the decaying remains of a cactus-like plant. 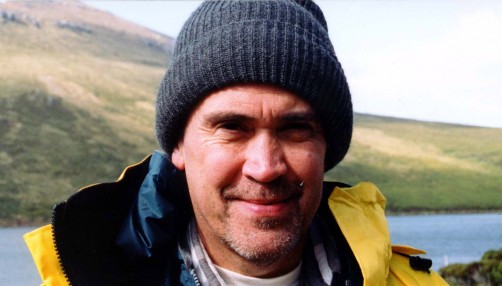 Newswise — FAYETTEVILLE, Ark. – An international group of scientists, led by University of Arkansas mycologist Steve Stephenson, discovered the first specimens of slime molds from the Namib Desert in southern Africa.

“Myxomycetes, a fungus-like group of slime molds, are usually associated with moist habitats, but we managed to collect approximately 50 specimens representing the first records from Namibia and the largest series of specimens known from any desert in Africa,” Stephenson said.

Myxomycetes are not plants or animals but they share the characteristics of both. They feed on the microorganisms associated with dead plant material, especially bacteria and fungi, and they play an important role in vital ecosystem processes such as nutrient cycling. Myxomycetes are commonly found in soil and on dead wood and leaves on the forest floor. However, a few species can be found in an ordinary lawn.

“The most important scientific aspect of our expedition was to document the occurrence of myxomycetes in yet another region of the world,” he said. “We also collected a large series of samples of dead plant material, from which we will isolate additional specimens of myxomycetes in the laboratory.”

Stephenson, a research professor of biological sciences in the J. William Fulbright College of Arts and Sciences, is one of the world’s leading experts on myxomycetes. He has traveled to all seven continents to collect and study these often abundant but understudied organisms.

The team was based at the Gobabeb Training and Research Center, an internationally recognized center for dry-land training and research located in what is considered the oldest desert on Earth.

“Gobabeb is located at the intersection of tall red sand dunes with virtually no vegetation and gravel plains with only scattered plants,” Stephenson said. “The region receives only about an inch of rain each year.”

Accompanying Stephenson on the National Geographic Society-funded trip were Arturo Estrada-Torres from Mexico, Carlos Lado from Spain, Diana Wrigley de Basanta from the United Kingdom and Randy Darrah from the United States. Darrah is one of Stephenson’s former students.

Several years ago, the same team surveyed myxomycetes in the mountains of the south-central portion of Cuba, and Stephenson has collaborated with the three foreign members of the group on surveys carried out in the deserts of Mexico, the Patagonia region of Argentina and the Andes Mountains of Peru. 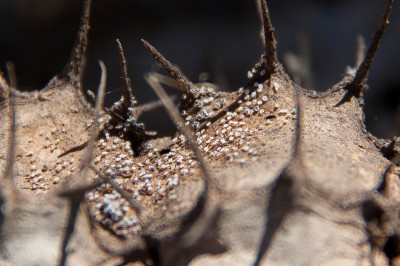 Caption: Fruiting bodies of a myxomycete (small round white structures) on the decaying remains of a cactus-like plant. 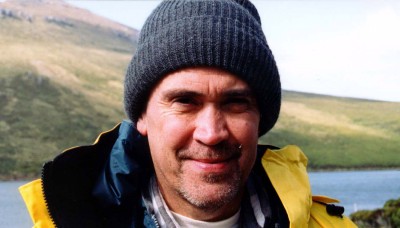