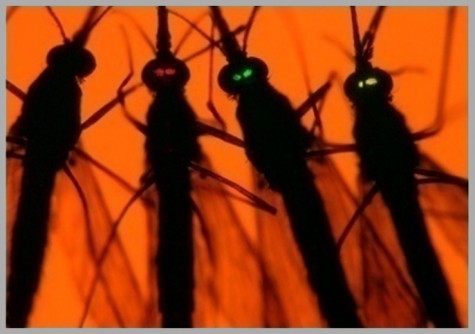 At left is a normal mosquito from the wild. The three mosquitoes to the right, with glowing eyes, are from three strains genetically engineered to better kill the malaria parasites in their guts. The mosquito at the far right, with yellow eyes, is a hybrid of the two other modified strains and was the most effective of the three at killing the parasite.

Newswise — Researchers at the Johns Hopkins Malaria Research Institute demonstrated for the first time that the Anopheles mosquito’s innate immune system could be genetically engineered to block the transmission of the malaria-causing parasite to humans. In addition, they showed that the genetic modification had little impact on the mosquito’s fitness under laboratory conditions. The researchers’ findings were published December 22 in the online journal PLoS Pathogens.

“The immune system of the Anopheles mosquito is capable of killing a large proportion—but not all—of the disease-causing parasites that are ingested when the mosquito feeds on an infected human,” said George Dimopoulos, PhD, senior author of the study and associate professor in the W. Harry Feinstone Department of Molecular Microbiology and Immunology at the Johns Hopkins Bloomberg School of Public Health. “We’ve genetically engineered this immune system to create mosquitoes that are better at blocking the transmission of the human malaria parasite Plasmodium falciparum. “

For the study, Dimopoulos and his team genetically engineered Anopheles mosquitoes to produce higher than normal levels of an immune system protein Rel2 when they feed on blood. Rel2 acts against the malaria parasite in the mosquito by launching an immune attack involving a variety of anti-parasitic molecules. Through this approach, instead of introducing a new gene into the mosquito DNA, the researchers used one of the insect’s own genes to strengthen its parasite-fighting capabilities. According to the researchers, this type of genetically modified mosquito could be further developed and used to convert malaria-transmitting to Plasmodium-resistant mosquito populations. One possible obstacle for this approach is the fitness of the genetically modified malaria resistant mosquitoes, since they would have to compete with the natural malaria-transmitting mosquitoes. The researchers showed with their study that the Rel2 genetically modified mosquito strain lived as long, and laid as many eggs, as the non-modified wild type mosquitoes, thereby suggesting that their fitness had not become significantly impaired.

“Malaria is one of world’s most serious public health problems. Mosquitoes and the malaria parasite are becoming more resistant to insecticides and drugs, and new control methods are urgently needed. We’ve taken a giant step towards the development of new mosquito strains that could be released to limit malaria transmission, but further studies are needed to render this approach safe and fail-proof,” said Dimopoulos.Worldwide, malaria afflicts more than 225 million people. Each year, the disease kills approximately 800,000, many of whom are children living in Africa.

The Johns Hopkins Malaria Research Institute is a state-of-the-art research facility at the Johns Hopkins Bloomberg School of Public Health. It focuses on a broad program of basic science research to treat and control malaria, develop a vaccine and find new drug targets to prevent and cure this deadly disease.

Funding was provided by the National Institutes of Health and the Johns Hopkins Malaria Research Institute.

For more news from the Johns Hopkins Bloomberg School of Public Health, visit www.jhsph.edu/publichealthnews or follow us on Facebook at www.facebook.com/JohnHopkinsSPH or on Twitter at www.twitter.com/JohnsHopkinsSPH.