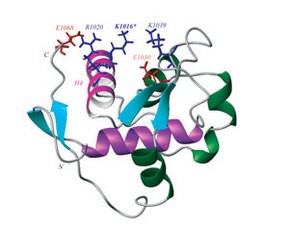 University of Maryland scientist Jin-Shan Hu and his research team created this model of the DPBD of a WRN gene with nuclear magnetic resonance spectroscopy. It may provide clues to accelerated aging diseases, such as Werner syndrome.

Newswise — A University of Maryland researcher and his team have discovered a key to the cause of the accelerated aging disease Werner syndrome. The finding may lead to understanding other age-related conditions, such as cancer and heart disease.

Using nuclear magnetic resonance spectroscopy (NMR), Jin-Shan Hu, an assistant professor of biochemistry at Maryland, and his research team have created the first-ever model of a protein that may cause premature aging conditions, such as Werner, when it doesn't function properly. Seeing the structure of that protein may one day lead to finding exactly how and why things go wrong, not only in rare genetic disorders, but in other aging-related disease.

"Once we understand the structure, we can understand much more," says Hu. "Instead of looking for a needle in the ocean, we now know there is a structure base and we know where to look for it."

Hu is lead author on a paper describing the finding, published in the Dec. 9 issue of the Proceedings of the National Academy of Sciences.

People with Werner syndrome begin rapidly aging in their teens. By the time they are in their 20's and 30's, they look three times their age. Few live to age 47, and most die of cancer or heart disease.

Scientists know that Werner syndrome is caused by a genetic mutation of a specific gene " the WRN gene, which some scientists think hold the key to understanding something about the aging process. Scientists also know that humans have five types of RecQ helicase proteins, including the WRN protein, which is expressed by the WRN gene. These proteins function as safeguards to maintain genome integrity. Mutations in three RecQ helicase proteins have been linked to genetic diseases.

But they don't know what goes wrong in this group of proteins that causes the aging process to go haywire. Hu and his team singled out the WRN protein, or enzyme, to look for some answers.

Containing more than 1400 amino acids, the WRN enzyme is a very large protein, which makes it very difficult to study, says Hu. "So we used a piecemeal approach, studying a small part of it at time," a process that took him several years.

The piece they focused on is a fragment that plays a role in making sure the whole protein functions properly -- the DPBD, or DNA and protein-binding domain. By using NMR to produce a 3-D model of the fragment, Hu's team was able to develop a hypothesis about the role of DPBD in Werner syndrome, and possibly other aging questions.

"DPBP appears to play the most important role in the protein function," say Hu. "It helps the protein go to a specific cellular location, to bind to the DNA and other functional proteins. If you have any kind of mutation that keeps it from properly binding to either DNA or other proteins, there is a problem.

"DPBD likely functions as the primary regulatory site for the WRN enzyme. Loss of the enzyme function leads to a breakdown in the gene, and consequently to Werner syndrome. We think we can use this model to explain the regulation of all RecQ helicase proteins. And if we understand that, we may understand how cancer occurs," says Hu.

Proceedings of the National Academies of Science (9-Dec-2005)