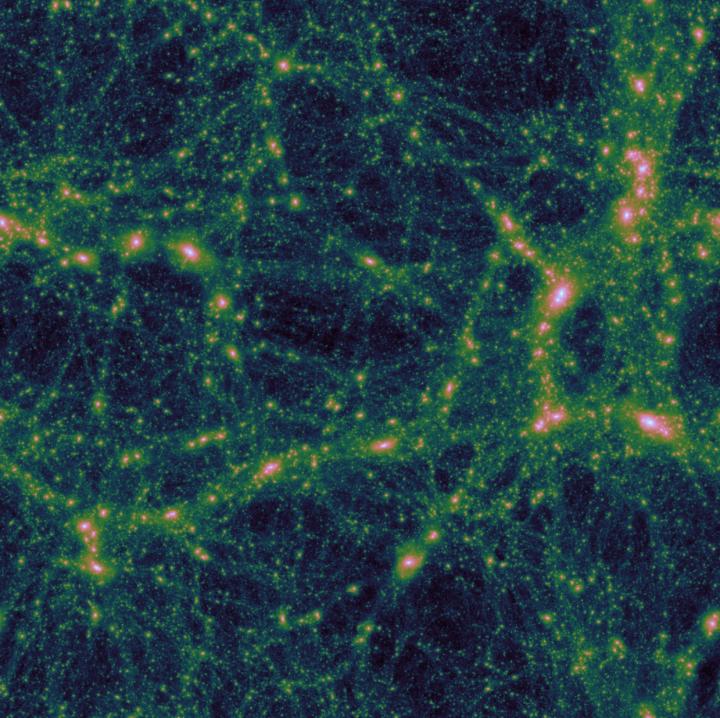 This figure illustrates structure in the simulated universe, in a box 200 million light-years on each side. It is color coded, using black, green, yellow, pink and white to represent low- to high-density regions, respectively 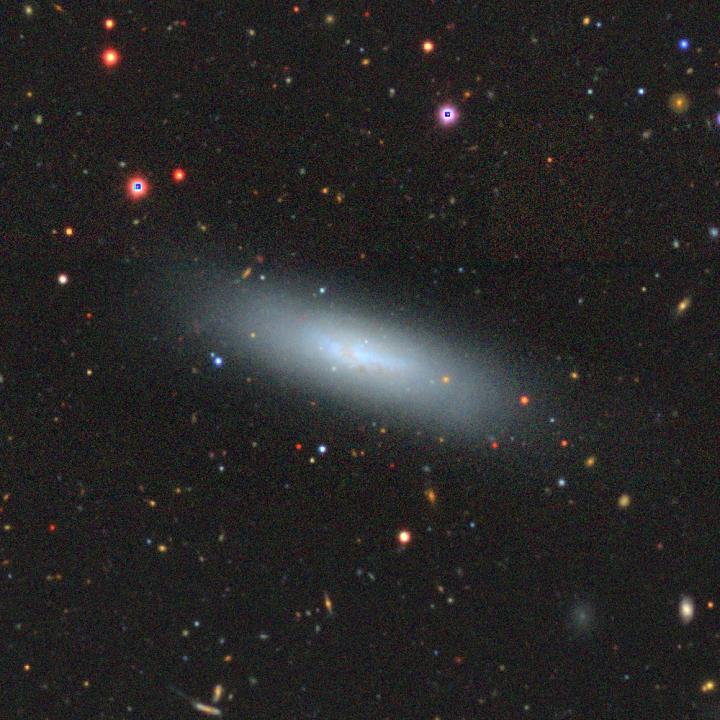 Newswise — Researchers from the National Astronomical Observatories of the Chinese Academy of Science (NAOC), Peking University and Tsinghua University have found a special population of dwarf galaxies that could mainly consist baryons within radii of up to tens of thousands of light-years. This contrasts with the normal expectation that such regions should instead be dominated by dark matter.

This study may challenge the formation theory of dwarf galaxies in the framework of standard cosmology and may provide new clues to the nature of dark matter. The results were published in Nature Astronomy on Nov. 26, 2019.

In standard cosmology, the Universe is dominated by cold dark matter and dark energy, while baryons only occupy 4.6% by mass. Galaxies form and evolve in systems dominated by dark matter (Fig. 1). In high-mass systems, the baryonic fraction may reach the universal value, i.e., 4.6%. In low-mass systems, the baryonic fraction may be much lower due to their shallow gravitational potential.

The satellite dwarf galaxies in our Local Group are found to be dominated by dark matter down to radii of a few thousand light-years. However, statistical studies of the dynamics of dwarf galaxies beyond the Local Group previously had been hampered by the extreme faintness of such systems.

Multi-wavelength data have recently made such studies possible, however.

By taking advantage of the release of 40% of the data from the Arecibo Legacy Fast (ALFA) catalogue and the Seventh Data Release of the Sloan Digital Sky Survey, a research group led by Prof. GUO Qi from NAOC has found 19 dwarf galaxies that are dominated by baryons at radii far beyond their half-optical radii ( typically a few thousand light-years). Normally, the dark matter-to-baryon mass ratio reaches 10-1000 for "typical" dwarf galaxies. Notably, most of these baryon-dominated dwarf galaxies are isolated galaxies, free from the influence of nearby bright galaxies and high-density environments.

"This result is very hard to explain using the standard galaxy formation model in the context of concordance cosmology, and thus encourages people to revisit the nature of dark matter," said Prof. GUO.

Further observations are required to understand the formation of these particular baryon-dominated dwarf galaxies.

Caption: This figure illustrates structure in the simulated universe, in a box 200 million light-years on each side. It is color coded, using black, green, yellow, pink and white to represent low- to high-density regions, respectively