Working in the isolated conditions of Antarctica, researchers from NYU and NYU Abu Dhabi operate a borehole winch to lower a turbulence device in the ocean cavity on Thwaites Glacier. 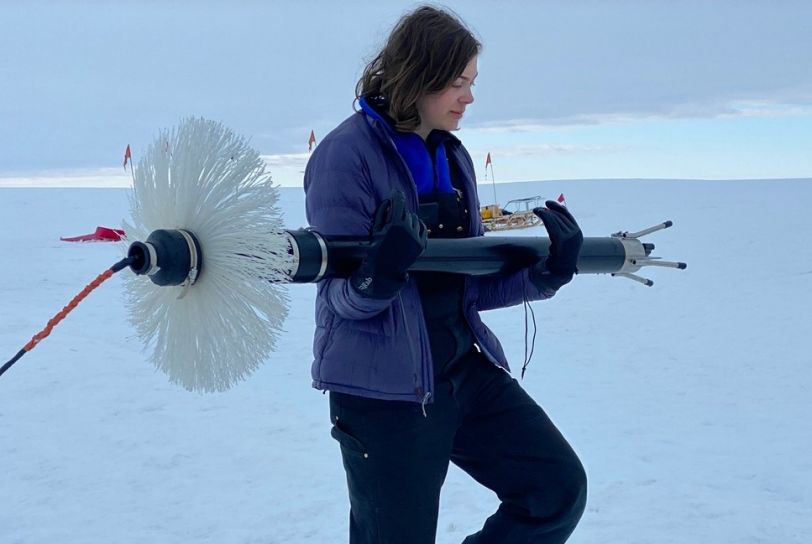 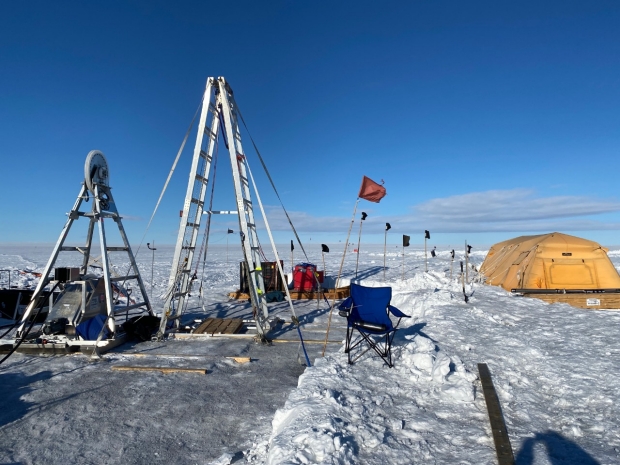 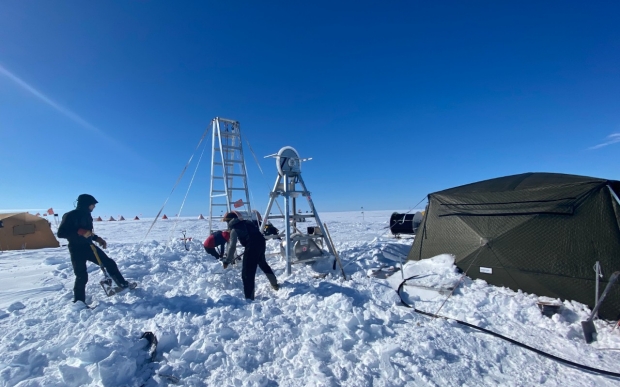 Researchers digging out the drill site after a three-day storm with winds reaching 50 knots. Drifts of snow accumulated up to five feet.

A sun dog is visible at night in an intermediate camp in West Antarctica (WAIS Divide Camp) on the way to the Thwaites research site. 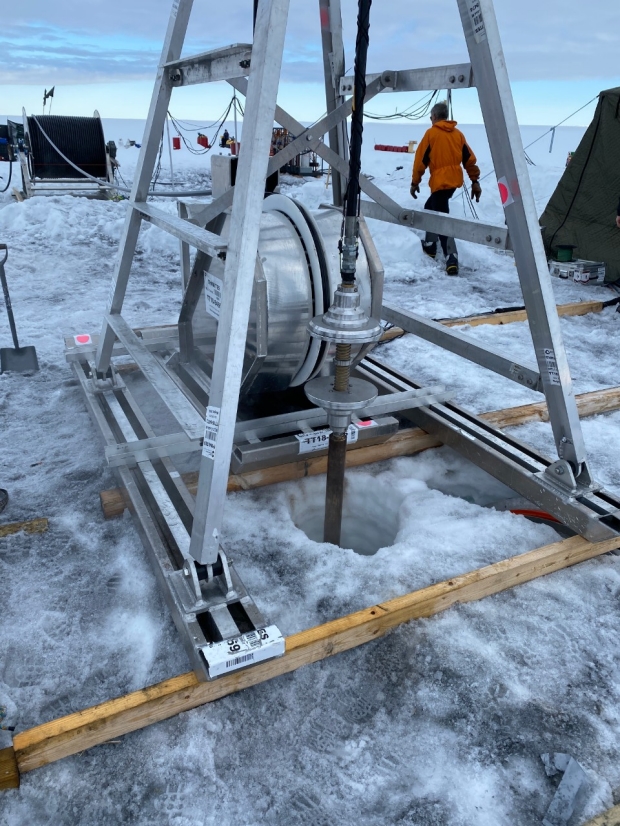 A reamer descends through the borehole which is 35 cm diameter and 600 m deep, it serves to prevent the hole from refreezing. 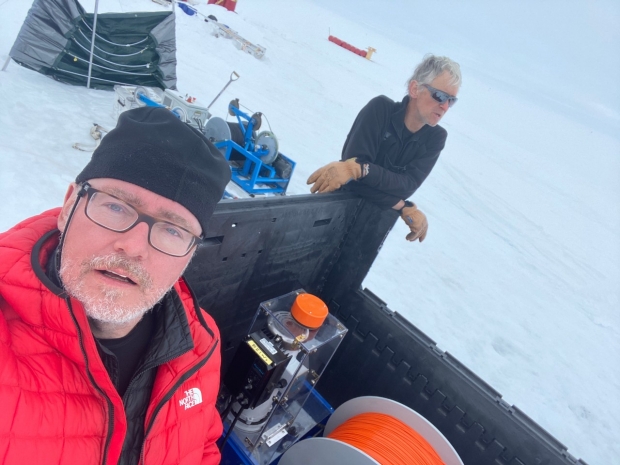 Newswise — A team of scientists has observed, for the first time, the presence of warm water at a vital point underneath a glacier in Antarctica—an alarming discovery that points to the cause behind the gradual melting of this ice shelf while also raising concerns about sea-level rise around the globe.

“Warm waters in this part of the world, as remote as they may seem, should serve as a warning to all of us about the potential dire changes to the planet brought about by climate change,” explains David Holland, director of New York University’s Environmental Fluid Dynamics Laboratory and NYU Abu Dhabi’s Center for Global Sea Level Change, which conducted the research. “If these waters are causing glacier melt in Antarctica, resulting changes in sea level would be felt in more inhabited parts of the world.”

The recorded warm waters—more than two degrees above freezing—flow beneath the Thwaites Glacier, which is part of the Western Antarctic Ice Sheet. The discovery was made at the glacier’s grounding zone—the place at which the ice transitions between resting fully on bedrock and floating on the ocean as an ice shelf and which is key to the overall rate of retreat of a glacier.

It would drain a mass of water that is roughly the size of Great Britain or the state of Florida and currently accounts for approximately 4 percent of global sea-level rise. Some scientists see Thwaites as the most vulnerable and most significant glacier in the world in terms of future global sea-level rise—its collapse would raise global sea levels by nearly one meter, perhaps overwhelming existing populated areas.

While the glacier’s recession has been observed over the past decade, the causes behind this change had previously not been determined.

“The fact that such warm water was just now recorded by our team along a section of Thwaites grounding zone where we have known the glacier is melting suggests that it may be undergoing an unstoppable retreat that has huge implications for global sea level rise,” notes Holland, a professor at NYU’s Courant Institute of Mathematical Sciences.

The scientists’ measurements were made in early January, after the research team created a 600-meter deep and 35-centimeter wide access hole and deployed an ocean-sensing device to measure the waters moving below the glacier’s surface. This device gauges the turbulence of the water as well as other properties such as temperature. The result of turbulence is the mixing of fresh meltwater from the glacier and salty water from the ocean.

It marks the first time that ocean activity beneath the Thwaites Glacier has been accessed through a bore hole and that a scientific instrument measuring underlying ocean turbulence and mixing has been deployed. The hole was opened on January 8 and 9 and the waters beneath the glacier measured January 10 and 11.

Aurora Basinski, an NYU graduate student who made the turbulence measurement, said, “From our observations into the ocean cavity at the grounding zone we observed not only the presence of warm water, but also its turbulence level and thus its efficiency to melt the ice shelf base.”

Another researcher, Keith Nicholls, a scientist with the British Antarctic Survey, added, “This is an important result as this is the first time turbulent dissipation measurements have been made in the critical grounding zone of the West Antarctic Ice Sheet.”

This research was supported by a $2.1 million, five-year grant from the National Science Foundation (PLR-1739003). The grant is part of the International Thwaites Glacier Collaboration (ITGC), headed by the United Kingdom’s Natural Environment Research Council and the National Science Foundation, which has been deploying scientists to gather the data needed to understand whether the glacier’s collapse could begin in the next few decades or centuries. Other members of the field team included researchers from Penn State, Georgia Tech, and the British Antarctic Survey.

For more about the project, please visit https://thwaitesglacier.org/projects/melt.

Caption: Researchers digging out the drill site after a three-day storm with winds reaching 50 knots. Drifts of snow accumulated up to five feet.

Caption: A sun dog is visible at night in an intermediate camp in West Antarctica (WAIS Divide Camp) on the way to the Thwaites research site.

Caption: A reamer descends through the borehole which is 35 cm diameter and 600 m deep, it serves to prevent the hole from refreezing.