5-May-2014 10:00 AM EDT, by Brookhaven National Laboratory
favorite_border 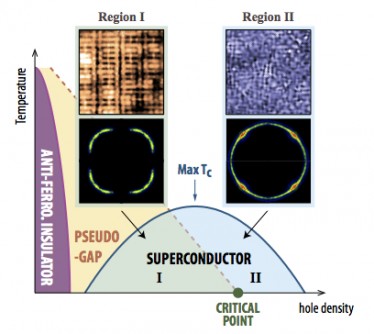 Disappearing stripes linked with free electron movement: Scientists used a precision microscope to simultaneously explore electrons' arrangements and movements as charge carriers called holes were added to transform a copper-oxide material from an insulator to a superconductor. With increasing hole density, the material first takes on a mysterious "pseudogap" phase that overlaps and competes with superconductivity. Region I: While still in the pseudogap phase, some electrons occupy static positions apparent as a striped pattern (top inset) while other electrons are free to move and carry current, but only in certain directions (arcs with gaps in lower inset). Region II: At a critical point of hole density, the static stripes disappear and all electrons can move freely in all directions. The point of maximal superconductivity (Max Tc) lies within this region. Finding ways to prevent the static electron arrangement may be one way to push the Max Tc to a higher temperature more suitable for real-world applications.

Newswise — UPTON, NY—Scientists seeking to understand the intricacies of high-temperature superconductivity—the ability of certain materials to carry electrical current with no energy loss—have been particularly puzzled by a mysterious phase that emerges as charge carriers are added that appears to compete with superconductivity. It's also been a mystery why, within this "pseudogap" phase, the movement of superconducting electrons appears to be restricted to certain directions. So exploring the pseudogap and whether and how it affects the movement of electrons has been a pivotal challenge.

Now, a team lead by scientists at the U.S. Department of Energy's (DOE) Brookhaven National Laboratory and Cornell University have used unique capabilities to reveal detailed characteristics of the electrons in one of these materials as it transforms from an insulator through the mysterious pseudogap phase and eventually into a full-blown superconductor. The results, described in the May 9, 2014, issue of Science, link two distinct personality changes in the material's electrons: the disappearance of a rather exotic periodic static arrangement of certain electrons within the pseudogap phase, and the sudden ability of all the material's electrons to move freely in any direction. The finding strengthens support for the idea that the periodic arrangement—variously referred to as "stripes" or "density waves"—restricts the flow of electrons and impairs maximal superconductivity in the pseudogap phase.

"This is the first time an experiment has directly linked the disappearance of the density waves and their associated nanoscale crystal distortions with the emergence of universally free-flowing electrons needed for unrestricted superconductivity," said lead author J.C. Séamus Davis, a senior physicist and Director of DOE's Center for Emergent Superconductivity at Brookhaven Lab and also a professor at both Cornell University and the St. Andrews University in Scotland. "These new measurements finally show us why, in the mysterious pseudogap state of this material, the electrons are less free to move."

That information, in turn, may help scientists engineer ways to get superconductivity flowing under more favorable conditions. Right now, even these "high-temperature" copper-oxide materials operate as superconductors only when cooled to below -100 degrees Celsius. "That's room temperature during a particularly bad winter in Antarctica," Davis said. The hope is to find ways to raise the operating temperature for real-world energy-saving applications—things like highly efficient power generation and transmission and computers that work at speeds thousands of times faster than today's.

In their native state, even at super chilly temperatures, the copper-oxide materials are actually strong insulators. To induce them to superconduct, the scientists chemically inject additional electronic carriers, a process called doping. But tracking how this process alters the electronic structure and associated nanoscale distortions as the material transforms from insulator to pseudogap phase and eventually full-blown superconductivity is no easy task.

"The crystal distortions appear in our experiments like the ghostly, smeary shadows that a moving person makes in a long photographic exposure, making it difficult to really recognize their features and their character, or even see them at all in many cases," said Simon Billinge, a Brookhaven physicist who heads a team exploring the role of such nanoscale fluctuations in superconductors and other complex materials. "We are only now developing tools and methods to see and track these subtle effects."

To capture the elusive electronic behavior, Chung-Koo Kim, a postdoctoral fellow in Billinge's group, and Kazuhiro Fujita, a Research Associate in Davis' Group, worked with Davis using a spectroscopic imaging scanning tunneling microscope invented by the latter. This tool allows the scientists to simultaneously visualize the spatial arrangements of individual static electrons and the direction of travel of those that are free to move. They systematically scanned the copper-oxide material under various levels of doping to see how the arrangements and behavior of the electrons changed as the material evolved.

Davis likens the technique to flying over a frozen river where you can see static patterns formed by the ice while also detecting flowing liquid water—and doing it over and over through the spring as the frozen waterway gradually melts. In the copper-oxide material, instead of raising the temperature, the scientists raise the level of doping to "melt" the density waves at a particular "critical point."

"This was a massive effort, taking many person-years, making long and difficult measurements on multiple samples to track the evolution of these two effects," Davis said.

At low charge carrier density, the microscopic flyovers revealed somewhat static, ordered electrons—the "frozen" stripe patterns—and the flow of superconducting electrons limited to only certain directions. But subsequent scans taken as more charge carriers were added revealed that the static pattern disappeared and electrons began to flow freely in all directions at exactly the same level of doping—close to the point at which the most robust superconductivity sets in.

"This is the first direct observation that these two phenomena are linked: The density waves with their associated nanoscale distortions disappear and the electrons in the material change their personality suddenly at a well-defined material composition," Billinge said.

This direct observation confirms a long-held suspicion that the static electron arrangement and associated nanoscale fluctuations impair the free flow of electrons—like ice on a river impairs the flow of liquid water, Davis said. By analogy, adding charge carriers breaks up the static pattern, like melting the ice.

"We are demonstrating that when the electrons are no longer hampered by the 'frozen' density wave state, they become universally free to flow unimpeded," Davis said.

Another way to look at it, Billinge said, is by thinking of a chess game with kings, bishops, and knights filling the board so none can move. As you gradually remove some of the pieces—analogous to doping with charge carriers called "holes," which is what the scientists did—some of the pieces would be free to move according to their usual rules. More holes would allow more movement. But what the scientists observed instead is that at low "hole" concentration, certain kinds of movement (say, the kings' forward and sideways movements) were prohibited and that the chessboard itself appeared to have a different kind of pattern—stripes instead of alternating squares. But at the critical hole concentration—precisely 20 percent—the researchers found that both the quantum rules-of-the-game and the board itself changed, allowing the free movement of all pieces.

Of course, freeing electrons in a copper-oxide insulator to get superconducting current flowing for useful applications won't be quite as easy as melting ice to get liquid water or removing pieces from a chessboard. But it does offer clues.

"What this discovery implies is that if you prevented the static stripes from ever occurring, you might end up with a material that could act as a superconductor at a lower density of doping—and a much higher temperature," Davis said.

To see this news release on the BNL website, go to:http://www.bnl.gov/newsroom/news.php?a=11637 (link active after embargo)