Scientists Have Conducted a Mathematical Analysis of a Rare Cavernicolous Crustacean 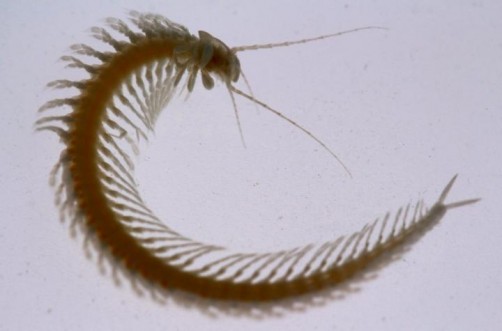 Newswise — A scientific collaboration of researchers from the Lomonosov Moscow State University and the Smithsonian Institution has discovered previously unknown regularities of arthropod limbs based on studies of the remipede Speleonectes tulumensis, a rare crustacean found in saline waters of caves. The results of the research have been published in PeerJ, an open-access interdisciplinary journal.

Vyacheslav Ivanenko, the Leading Researcher in the Department of Invertebrate Zoology, the Faculty of Biology at the Lomonosov Moscow State University, noted that "Our results are significant for studies of diversity and evolution of recent and fossil arthropods, particularly with regard to studies of the fundamental mechanisms of animal evolution. Furthermore, the research turns out to be an interesting example of cooperation between mathematicians and specialists in comparative developmental morphology."

The class Remipedia was discovered in 1981 inhabiting marine caves of the Caribbean Sea. Remipedes are an unusual group of crustaceans, and subsequently have been found in marine caves of Australia, as well as lava tubes of the Azores islands. Ivanenko further notes that "In Russia, as well as in other countries, there are many of caves whose troglobionts, especially microscopic ones, are surprisingly poorly studied for their biology and diversity".

Remipedes have some unusual structural peculiarities, and these resulted in their initial placement at the base of the evolutionary tree of crustaceans, although now may carcinologists consider them more closely related to insects. One such structural peculiarity is an elongate body whose trunk consists of a large number of body segments (sometimes more than 40). Most of these body segments have a similar pair of appendages, equipped with a large number of setae. The appendages are used for swimming. At the time of this study there were no detailed studies of these appendages or their evolutionary peculiarities.

Furthermore, the authors discovered that the predicted power of the mathematical formula worked for different developmental stages of the remipede. Ivanenko stated: "We have found the following regularities in Remipedes structure: the peculiarities of the setation of the appendages has been defined and a minimum set of attributes necessary for effective remipede classification has been elaborated". Furthermore the authors were surprised to find that changes in setation of remipede limbs are similar to those found on a copepod. The authors believe their analysis will be applicable to other crustaceans including, branchiopods, cephalocaridans, leptostracans and decapods.

The scientists working with Dr. Ivanenko include: Ekaterina Antonenko, a doctoral student at the Faculty of Mechanics and Mathematics, Moscow State University, Mikhail Gelfand, Deputy Director of Institute for Information Transmission Problems (Russian Academy of Sciences), Prof. at the Faculty of Bioengineering and Bioinformatics, Moscow State University and Skolkovo Institute of Science and Technology (Skoltech), and American researchers Jill Yager of the Smithsonian Institution, who discovered the first remipede, and the carcinologist Frank Ferrari.

Ivanenko notes that "The material and technical resources of the Moscow State University, its academic and lecturer stuff provide all necessary conditions for conducting of such interdisciplinary studies, in which both senior and junior researchers could take part".