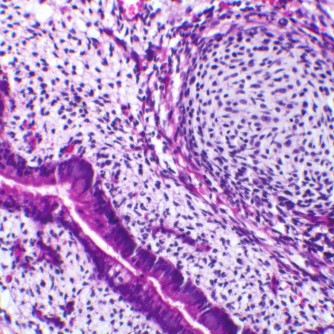 This image shows a teratoma formed by induced pluripotent stem cells with defective Fanconi anemia DNA repair. Even with defective FA DNA repair, the induced stem cells were able to start the process of forming specific tissues until the DNA repair defect killed them off. Teratomas are benign tumors containing a haphazard array of cells and tissues of different organ systems.

The findings, published Jan. 12 in Stem Cell Reports, also create a bit of molecular intrigue. It involves how cells used in the study – which still had the Fanconi anemia (FA) DNA repair defect – were able to recover and grow normally after targeted treatment.

“This study provides an experimental platform to test new therapies that could prevent pre- and post-natal Fanconi anemia conditions, which have no cure and limited treatment options,” said Susanne Wells, PhD, lead investigator and director of the Epithelial Carcinogenesis and Stem Cell Program in the Cincinnati Children’s Hospital Medical Center (Cancer and Blood Diseases Institute). “Our findings also raise a number of important questions, so there is a lot more to be done.”

Even with defective FA DNA repair, the stem cells retained their ability to transform into different tissues. Humanized mice injected with the defective cells even started to form teratomas – benign tumors that contain a haphazard mishmash of cells and tissues of different organ systems. But researchers said the DNA repair defect started to kill off the pluripotent stem cells by blocking cell division and causing programmed cell death.

The authors then noticed an enzyme that serves as a DNA regulatory checkpoint during cell division (CHK1) was behaving hyperactively in the stem cells, which hastened their death. The researchers used existing pharmacologic inhibitors of CHK1 to block the hyperactive enzyme at a critical stage of the stem cell cycle. This allowed them to override what usually are unfixable errors in the FA repair pathway.

After targeted treatment, FA-pathway-deficient pluripotent stem cells resumed dividing and expanding normally. Researchers said much to their surprise, the resumption of cell growth occurred without what they had expected to be massive chromosome abnormalities. Because of this, the scientists speculate that a compensating DNA repair process is engaged in the reinvigorated cells.

Because this unidentified repair process may also rescue the DNA repair defect in the different tissues types affected by Fanconi anemia, Wells and colleagues believe their study may point to an approach that treats all clinical manifestations of the disease – including anemia and cancer.

“A key question for us is what type of DNA repair kicks in under these conditions – and is it error free or error prone?” explained Wells. “A novel mode of emergency DNA repair might indeed be discovered in the iPSC cells. We believe some type of compensatory DNA repair must be driven by CHK1 inhibition when cells have FA pathway loss, otherwise the cells would have died off very quickly.”

Researchers plan to follow up this study with additional testing in “humanized” and genetic mouse models. They will attempt to improve embryonic development and post-birth fitness in FA-pathway deficient mice with timed application of the CHK1 inhibitor. The authors will closely monitor the mice as they age and use genetic sequencing to screen for disease-causing gene mutations. They also will take advantage of the prolonged monitoring period to look for evidence of a DNA repair process (either novel or existing) in the FA-deficient mice.

The research team included an extensive cross-disciplinary collaboration of basic scientists and clinicians at Cincinnati Children’s, Wells said. Patient skin biopsies for the generation of iPSCs were provided by the Fanconi Anemia Comprehensive Care Center at Cincinnati Children’s, and the Pluripotent Stem Cell Facility (Division of Developmental Biology) at Cincinnati Children’s assisted with the culturing and programming of iPSCs. Funding support for the study came from a Pelotonia Postdoctoral Fellowship and the National Institutes of Health (R01CA102357).

About Cincinnati Children’sCincinnati Children’s Hospital Medical Center ranks third in the nation among all Honor Roll hospitals in U.S.News and World Report’s 2015 Best Children’s Hospitals. It is also ranked in the top 10 for all 10 pediatric specialties, including a #1 ranking in pulmonology and #2 in cancer and in nephrology. Cincinnati Children’s, a non-profit organization, is one of the top three recipients of pediatric research grants from the National Institutes of Health, and a research and teaching affiliate of the University of Cincinnati’s College of Medicine. The medical center is internationally recognized for improving child health and transforming delivery of care through fully integrated, globally recognized research, education and innovation. Additional information can be found at www.cincinnatichildrens.org. Connect on the Cincinnati Children’s blog, via Facebook and on Twitter .