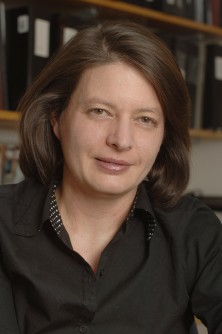 Kornelia Polyak, MD, PhD, a breast cancer geneticist at Dana-Farber, and colleagues found that a large proportion of cells within these tumors showed elevated activity in a network of genes called the Jak2/Stat3 pathway. Experiments have demonstrated that a drug specifically aimed to block this pathway halted the growth of such tumors in mice. The report will be published online June 1 by The Journal of Clinical Investigation in advance of its July print issue.

Polyak called the strategy very promising. "The discovery of these targets will rapidly lead to clinical trials with the hope of achieving one of the first specific therapies for triple-negative breast cancers," said Polyak, senior author of the findings that was submitted by a large collaboration of scientists.

Jak2/Stat3 inhibitors are already in advanced phases of clinical testing for certain blood cancers that are driven by the Jak2/Stat3 pathway. Polyak noted that because these inhibitors have already been tested in humans and appear to be relatively non-toxic, it should be possible to begin testing them in breast cancer patients soon.

Triple-negative breast cancers are characterized by a lack of estrogen, progesterone, and HER2 receptors, which makes them unresponsive to targeted treatments that block those receptors. These tumors, also termed "basal-like," make up an estimated 15 to 20 percent of breast cancers and tend to occur in younger women, those with BRCA1 gene mutations, and black women.

As a result, Polyak and colleagues believe that new treatments aimed at specifically knocking out these CD44+CD24- cells with activated Jak2/Stat3 signaling could be useful in combating triple-negative cancers and potentially other tumors that contain these cells.

The investigators surveyed genes present in CD44+CD24- cells and found 1,576 genes that differed from those in other, more differentiated epithelial cancer cells within tumors. Additional experiments assessing the viability of CD44+CD24- cells when each of these genes was inhibited individually narrowed the field to 15 genes that were required for their growth and thus looked like promising targets for selective drugs. These 15 genes were linked to the overactive Jak2/Stat3 pathway, which in turn was triggered by a growth factor signal, interleukin-6, or IL-6.

When the activity of several of those genes was blocked in CD44+/CD24- tumor cells, the level of Stat3 signaling was reduced and cell growth was suppressed, the researchers said.

Polyak said that inhibitor drugs exist for five of the genes identified in the CD44+CD24- cell network, and two of those drugs are currently in advanced clinical testing.

Nancy Lin, MD, a Dana-Farber oncologist who will lead the clinical trial of a Jak2/Stat3 inhibitor in breast cancer patients, said women who volunteer for the trial will be tested to determine whether the pathway is abnormally activated in their cancer. Those who test positive will be candidates for treatment with the drug. According to Lin, the abnormal pathway is expected to be found in 50 to 60 percent of patients with triple-negative cancers.

First author of the report is Lauren Marotta, PhD, a graduate student in the Polyak laboratory. The other authors are from Dana-Farber, Harvard Medical School, Brigham and Women's Hospital, the Harvard School of Public Health, the Broad Institute of MIT and Harvard, Memorial Sloan-Kettering Cancer Center, and GeneGo, Inc., as well as institutions in Spain, Russia, and Korea.

The research was supported in part by Novartis, a National Cancer Institute SPORE grant, the Breast Cancer Research Foundation, and the American Cancer Society.