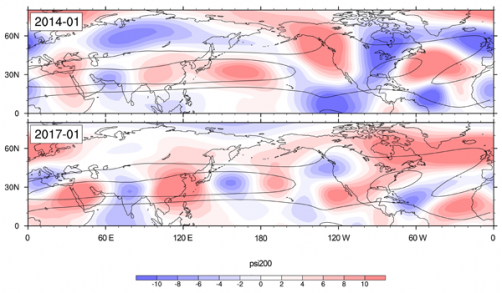 Image by Haiyan Teng and Grant Branstator, ©UCAR. This image is freely available for media & nonprofit use.

The high- and low-pressure regions of wavenumber-5 set up in different locations during January 2014, when California was enduring a drought, and January 2017, when it was facing floods. The location of the high and low pressure regions (characterized by anticylonic vs. cyclonic upper-level air flow) can act to either suppress or enhance precipitation and storms. The black curves illustrate the jet streams that trap and focus wavenumber-5.

Newswise — BOULDER, Colo. — The crippling wintertime droughts that struck California from 2013 to 2015, as well as this year's unusually wet California winter, appear to be associated with the same phenomenon: a distinctive wave pattern that emerges in the upper atmosphere and circles the globe.

Scientists at the National Center for Atmospheric Research (NCAR) found in a recent study that the persistent high-pressure ridge off the west coast of North America that blocked storms from coming onshore during the winters of 2013-14 and 2014-15 was associated with the wave pattern, which they call wavenumber-5. Follow-up work showed that wavenumber-5 emerged again this winter but with its high- and low-pressure features in a different position, allowing drenching storms from the Pacific to make landfall.

"This wave pattern is a global dynamic system that sometimes makes droughts or floods in California more likely to occur," said NCAR scientist Haiyan Teng, lead author of the California paper. "As we learn more, this may eventually open a new window to long-term predictability."

The finding is part of an emerging body of research into the wave pattern that holds the promise of better understanding seasonal weather patterns in California and elsewhere. Another new paper, led by NCAR scientist Grant Branstator, examines the powerful wave pattern in more depth, analyzing the physical processes that help lead to its formation as well as its seasonal variations and how it varies in strength and location.

The new papers follow a 2013 study by Teng and Branstator showing that a pattern related to wavenumber-5 tended to emerge about 15-20 days before major summertime heat waves in the United States.

Wavenumber-5 consists of five pairs of alternating high- and low-pressure features that encircle the globe about six miles (10 kilometers) above the ground. It is a type of atmospheric phenomenon known as a Rossby wave, a very large-scale planetary wave that can have strong impacts on local weather systems by moving heat and moisture between the tropics and higher latitudes as well as between oceanic and inland areas and by influencing where storms occur.

The slow-moving Rossby waves at times become almost stationary. When they do, the result can be persistent weather patterns that often lead to droughts, floods, and heat waves. Wavenumber-5 often has this stationary quality when it emerges during the northern winter, and, as a result, is associated with a greater likelihood of persistent extreme events.

To determine the degree to which the wave pattern influenced the California drought, Teng and Branstator used three specialized computer models, as well as California rainfall records and 20th century data about global atmospheric circulation patterns. The different windows into the atmosphere and precipitation patterns revealed that the formation of a ridge by the California coast is associated with the emergence of the distinctive wavenumber-5 pattern, which guides rain-producing low-pressure systems so that they travel well north of California.

Over the past winter, as California was lashed by a series of intense storms, wavenumber-5 was also present, the scientists said. But the pattern had shifted over North America, replacing the high-pressure ridge off the coast with a low-pressure trough. The result was that the storms that were forced north during the drought winters were, instead, allowed to make landfall.

Forecasters who predict seasonal weather patterns have largely looked to shifting sea surface temperatures in the tropical Pacific, especially changes associated with El Niño and La Niña. But during the dry winters of 2013-14 and 2014-15, those conditions varied markedly: one featured the beginning of an El Niño while the sea surface temperatures during the other were not characteristic of either El Niño or La Niña.

The new research indicates that the wave pattern may provide an additional source of predictability that sometimes may be more important than the impacts of sea surface temperature changes. First, however, scientists need to better understand why and when the wave pattern emerges.

In the paper published in Journal of the Atmospheric Sciences, Branstator and Teng explored the physics of the wave pattern. Using a simplified computer model of the climate system to identify the essential physical processes, the pair found that wavenumber-5 forms when strong jet streams act as wave guides, tightening the otherwise meandering Rossby wave into the signature configuration of five highs and five lows.

The scientists also searched specifically for what might have caused the wave pattern linked to the severe California drought to form. In the paper published in the Journal of Climate, the pair found that extremely heavy rainfall from December to February in certain regions of the tropical Pacific could double the probability that the extreme ridge associated with wavenumber-5 will form. The reason may have to do with the tropical rain heating parts of the upper atmosphere in such a way that favors the formation of the wavenumber-5 pattern.

But the scientists cautioned that many questions remain.

"We need to search globally for factors that cause this wavenumber-5 behavior," Teng said, "Our studies are just the beginning of that search."

Journal of Climate; Journal of the Atmospheric Sciences