Scientists Map the Genome of the Common Bed Bug 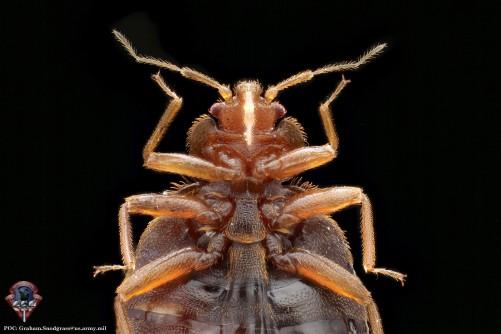 A close-up of Cimex lectularius, the common bed bug.

Newswise — The common bed bug, once considered rare in developed countries, has been proliferating on every continent but Antarctica for the last two decades, making it a growing concern for travelers and others. With an eye toward eradicating the parasite, which feeds on the blood of humans and other animals, an international research team has successfully mapped the genome of Cimex lectularius to get a better understanding of its genetic makeup.

The findings—by researchers from 36 institutions—have been published in the journal Nature Communications.

“There’s an explosion of insect genome sequencing right now,” said Jack Werren, a professor of biology at the University of Rochester and a member of the research team. “But the bed bug is particularly interesting because it’s a human parasite, a major pest, and has a unique biology.”

In his part of the sequencing project, Werren discovered 805 possible instances of genes being transferred from bacteria within the bed bug to the insect’s chromosomes—a process called lateral gene transfer (LGT).

Chromosomes routinely break and are then repaired in organisms. The most common repair mechanism is called homologous recombination in which similar genetic material is used as a template in piecing the broken chromosome back together. But, periodically, the repairs go badly and foreign DNA is incorporated into the chromosomes—in the case of C. lectularius, that DNA includes genetic material from bacteria.

“Usually, genes that are transferred from other organisms never become functional or are harmful to the host organism,” said Werren. “In those cases, the transferred material is often lost by random processes—such as mutation and deletion—or removed during genetic selection.”

One exception involves the transfer of a patatin-like gene from the Wolbachia bacteria. Patatin genes help organisms to store and cleave starch and lipid molecules. The gene, transferred from the intracellular bacterium Wolbachia to C. lectularius, appears to be functional in the male bed bug, but not the female.

“Because the inserted genes create unique genetic profiles in bed bugs, they have the potential of becoming effective targets for pest control,” said Werren.

A great deal more work needs to be done before any eradication steps can be taken based on these results. While 805 candidate sites for LGT have been identified in the common bed bug, Werren says only six have been confirmed, so far, as actually having received genetic material from bacteria.

Of those 805 candidate sites, 459 have been attributed to the Arsenophonus bacteria, and 87 from Wolbachia, both of which are common bacterial associates of insects.