Scientists Measure “Tones” of Black Holes for the First Time 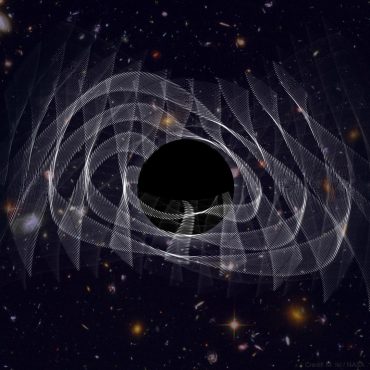 This illustration depicts a black hole ringing as it merges from two smaller black holes. The collision also produces the gravitational waves (in white).

Newswise — STONY BROOK, NY, September 12, 2019 – A team of scientists including Will Farr, PhD, an astrophysicist at Stony Brook University, has found a way for the first time to detect multiple tones of a black hole ringing like a bell -- something that most astrophysicists thought would not be possible for a decade or more. This finding, published online in a paper in Physical Review Letters, confirms Einstein’s theory of general relativity and may help to revolutionize scientists’ understanding of black holes.

Black holes emerge in an agitated state from the violent astrophysical processes that birth them. Just like a struck bell, a disturbed black hole emits gravitational waves at characteristic tones that fade away as the hole settles. By measuring these tones, the team validates Einstein’s theory of General Relativity that predicts that the pitch and decay rate of these tones are uniquely set by the black hole’s mass and rotation speed (spin).

The scientists tested Einstein’s prediction by reanalyzing data from the first gravitational waves ever detected in a black hole merger event (GW150914). The analysis led to the identification of two independent tones emitted by a newly born black hole. The pitch and decay rates of these tones are in line with Einstein’s theory.

“Previously it was believed these tones were too faint to be detected, yet now we are able to detect them and this opens the door for us to study the ‘ringing’ of black holes,” say Farr, Associate Professor in the Department of Physics and Astronomy in the College of Arts and Sciences at Stony Brook and group leader for gravitational wave astronomy at the Flatiron Institute’s Center for Computational Astrophysics in New York City.

He explains that this was a direct test of properties of the black holes that form in these merger events and that the tones are emitted from the region very close to the “event horizon” of the newly formed black hole and therefore are sensitive to the properties of gravity in this extreme environment.

Currently there are two observatories internationally that detect cosmic gravitational waves, including those from black holes --- LIGO and Virgo – and scientists had thought they were insufficiently sensitive to pick up or define multiple “tones” from merger events.

Farr says that the with new data analysis and LIGO and Virgo continuing to observe black hole mergers, tests from the observatories will become ever more precise, likely leading to additional detection of black hole tones and better understanding of these exotic objects.

About Stony Brook University Stony Brook University, widely regarded as a SUNY flagship, is going beyond the expectations of what today’s public universities can accomplish. Since its founding in 1957, this young university has grown to become one of only four University Center campuses in the State University of New York (SUNY) system with over 26,000 students, more than 2,700 faculty members and 18 NCAA Division I athletic programs. Our faculty have earned numerous prestigious awards, including the Nobel Prize, Pulitzer Prize, Indianapolis Prize for animal conservation, Abel Prize and the inaugural Breakthrough Prize in Mathematics. The University offers students an elite education with an outstanding return on investment: U.S.News & World Report ranks Stony Brook among the top 40 public universities in the nation. Its membership in the Association of American Universities (AAU) places Stony Brook among the top 62 research institutions in North America. As part of the management team of Brookhaven National Laboratory, the University joins a prestigious group of universities that have a role in running federal R&D labs. Stony Brook University fuels Long island’s economic growth. Its impact on the Long island economy amounts to $7.38 billion in increased output. Our state, country and world demand ambitious ideas, imaginative solutions and exceptional leadership to forge a better future for all. The students, alumni, researchers and faculty of Stony Brook University are prepared to meet this challenge.