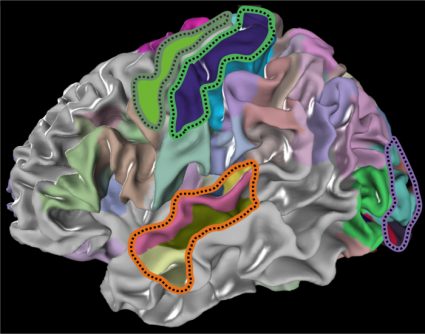 The HBP researchers conducted a study that targeted three levels of cortical organisation: cytoarchitecture, neurotransmitter receptor architecture and neurotransmitter receptor gene expression. The study elucidates principles of human brain organisation across the visual, auditory, somatosensory and motor functional systems, going beyond the simplified view of a ‘mosaic’ of areas forming the neocortex. The results were published in the journal NeuroImage.

To reveal the different properties of functional systems, and how brain areas within a functional system differ with respect to the processing hierarchy - from primary to higher associative, the team analysed cytoarchitectonic and receptorarchitectonic data of the Julich Brain Atlas – a three-dimensional multimodal atlas of the human brain – and compared the data with transcriptomic data from the Allen Human Brain Atlas.

“Bridging the gaps between different levels of brain organisation is one of the biggest challenges in neuroscience today. In the Julich Brain Atlas we can do it systematically. It integrates the data and is an invaluable tool”, says Daniel Zachlod, first author of the study.

The researchers investigated the relationship of neurotransmitter receptor densities with their corresponding genes in 15 cytoarchitectonic areas of the visual, auditory, somatosensory and motor systems. They analysed differential gene expression within brain areas of each of those functional systems.

“We found that the receptor architecture and gene expression patterns within a functional system change in a systematic way, in correspondence to increasing complexity of information processing”, explains HBP Scientific Director Katrin Amunts, who is last author of the study.

The study demonstrates a method to unravel structure-function relationships by using the multilevel Julich-Brain Atlas to bridge the different scales of brain organisation.

Previous studies had already indicated the relevancy of receptor gene expression for the functional differentiation of the brain in rodents, but data on the human brain is much sparser and more fragmented. The authors of the present study argue that it is mandatory to extend such studies to the human brain, in order to better understand the healthy brain, as well as pathogenesis of brain disorders with alterations in neurotransmitter systems.