12-Mar-2007 5:00 AM EDT, by University of Massachusetts Amherst
favorite_border 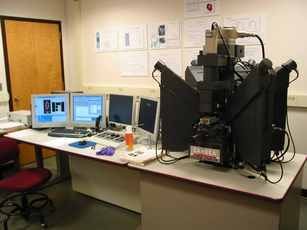 Using the custom-built Ultrachron, UMass Amherst scientists are assigning dates to the geologic processes that rocks experience with new precision.

Newswise — Assigning dates to the events in the life of a rock—for example, a collision with a piece of continent, or a journey through the Earth's crust—has long challenged geologists, as the events themselves can confound evidence of the past. But now, armed with a custom-built machine known as the Ultrachron, University of Massachusetts Amherst scientists are refining a technique that allows them to pin dates to geologic processes with unprecedented precision. The research is already providing new information on the expansion of the North American continent and the growth of the Himalayas, and could help geologists re-evaluate current debates such as the "Snowball Earth" hypothesis.

UMass Amherst geologists Michael Williams and Michael Jercinovic will discuss the new technique at the 42nd annual meeting of the Northeastern Section of the Geological Society of America Monday, March 12, in Durham, N.H. The work also appears in the current Annual Review of Earth and Planetary Sciences.

The life of a rock is often filled with drama—there may be collisions, deforming pressures, intense heat or the scrape and weight of glaciers. Figuring out when something happened to a particular piece of rock has been difficult—methods exist for dating a rock's absolute age—but scientists trying to determine the dates of a rock's experiences have had to settle on ballpark figures often many millions of years apart.

In the past decade however, researchers discovered that nature has a version of an airplane's black box, in the form of a little-known mineral called monazite. Common in a wide variety of rocks, monazite contains uranium and thorium—elements that decay to lead over a predictable length of time—allowing scientists to read the ratios of these elements like a clock. Moreover, monazite grows in distinct layers, or "domains," and a new domain is added each time the parent rock is altered, making the mineral a powerful tool for dating geologic processes, says Williams.

"It grows a bit like an onion, a new layer is added each time the host rock undergoes some geologic event," he says. When a new domain forms, its uranium clock begins ticking, so by carefully analyzing each domain in a fleck of monazite, the researchers can set dates to processes that affected the host rock—a collision or a period of melting, for example. "It's acting like a petrologic tape recorder," says Williams.

As Williams and Jercinovic continued to work with the mineral, they realized that an instrument built precisely for monazite analysis would be a very powerful tool for getting at all kinds of geologic questions, such as when the oceans formed and how the continents grew. With such a machine scientists could shed new light on current debates, such as the controversial "Snowball Earth" hypothesis, which posits that between 500 million and 700 million years ago, the planet experienced an ice age so severe that the oceans froze over and life on earth was nearly brought to a halt.

So the scientists began discussions with Cameca, the French analytical instrumentation company, and applied for National Science Foundation (NSF) funding to custom-build an instrument for monazite analysis. Typically for this kind of work, researchers would cut and polish a chunk of rock and analyze it with an electron-probe—a machine that directs an electron beam onto a mineral sample and then measures the X-rays and electrons that bounce back. But regular probes couldn't deal with the tiny samples the researchers were working with—sometimes a mere 20 microns in size, a fraction of the size of a grain of salt. And they needed it optimized for monazite, which is very dense, so its electrons don't scatter very far, explains Jercinovic.

"We went to the drawing board with Cameca," he says. "We wanted to take more advantage of our beam so they refined the optics. They improved the brightness of the electron gun and altered the lenses." The researchers needed high current, but low voltage. Extra large diffracting crystals were made to catch more of the cone of X-rays coming from the sample. After two and a half years of discussion, construction and adjustments, the "Ultrachron" was dedicated at UMass Amherst, an event celebrated in Paris.

As Jercinovic and Williams use the Ultrachron, they continue to refine their technique and the machine. And they are unraveling the complicated history of some very old rocks. A slab of rock from Colorado had a fleck of monazite with a 1.64 billion-year-old domain, a 1.66 billion year-old one and 1.4 billion-year-old tip, likely formed when the host rock was stretched during an ancient faulting event. Former graduate student Kevin Mahan wanted to more precisely date when a chunk of rock in Saskatchewan was thrust through the Earth's crust to the surface—some evidence said 2.5 billion years ago, some said 1.9 billion years ago. Monazite analyses determined that the host rock's journey took place around 1.85 billion years ago—leading to new ideas about what the environment was like in the deep crust of North America.

The scientists received additional NSF funding supporting the exploration of this technique, says Jercinovic, giving them a freedom to really develop the best possible methods and parameters for analyses.

"When you look closely the monazite has a meaningfully complicated structure," says Jercinovic. "And we now have a powerful tool to extract information from that structure—it's very exciting."

Northeastern Section of the Geological Society of America, Annual Review of Earth and Planetary Sciences.