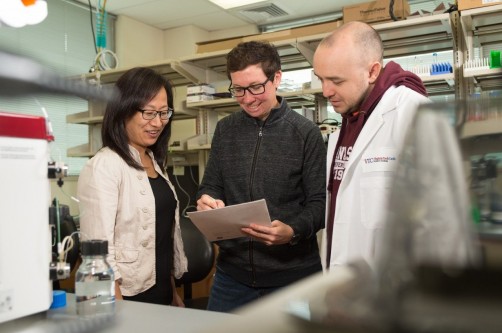 Deb Kelly (center), an associate professor at Virginia Tech Carilion Research Institute, with research associate Yanping Liang (left) and postdoctoral associate Will Dearnaley, are part of a research team that has successfully determined the full architecture of the breast cancer susceptibility protein (BRCA1). 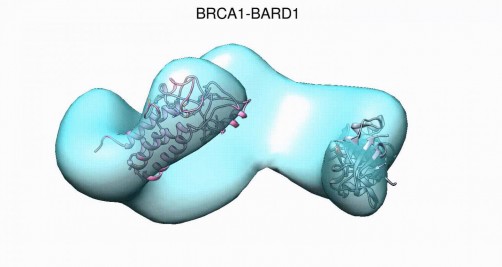 Scientists at the Virginia Tech Carilion Research Institute have successfully determined the full architecture of the breast cancer susceptibility protein (BRCA1) for the first time. This three-dimensional information provides a potential pathway to restore the BRCA1 protein's cancer-fighting abilities, even after it suffers damage.

Triple-negative breast cancer is aggressive, as its tumor cells typically lack target receptors that allow cancer-fighting drugs to be effective. The disease disproportionately affects younger women, and it has a higher rate of recurrence than other breast cancers.

Nearly a quarter of a million women were diagnosed with breast cancer in 2015 in the United States, according to the American Cancer Society, with about 15 percent of those cases diagnosed as triple-negative.

"Triple negative breast cancer is rarely cured after treatment. It stays with the survivors, who often live with the daily fear of its return," said Deborah Kelly, senior author of the paper and an associate professor at the Virginia Tech Carilion Research Institute. "The question of recurrence is a ticking clock in the mind of breast cancer patients. As part of our research, we're hoping to slow down the clock, and eventually stop it completely."

Triple negative breast cancer is often linked to inherited mutations in the BRCA1 gene. The BRCA1 gene codes for the BRCA1 protein, which is found in every cell in the body. BRCA1 proteins are involved in protecting DNA material and preventing tumor growth.

But mutations in BRCA1 hinder its ability to protect cells.

"Mutated proteins are able to perform some of their duties, even though they're partially compromised," Kelly said. Her team previously found that the cell tags the BRCA1 protein with another signaling molecule, labeling BRCA1 to be degraded in cells. "The cells destroy their own tumor-fighting ability, and, unfortunately, cancer develops."

In the Science Advances paper, Kelly and her team describe the first structural information for the full-length biological complex formed by BRCA1 and its collaborative partner, named BARD1.

The BRCA1-BARD1 complex forms a clamp-shaped structure and relays repair information to other parts of the cell. The Kelly team determined how the complex looks and works in three dimensions using a high-powered electron microscope and other imaging tools.

With the structural information, they identified the region where the cell marks BRCA1 to be destroyed and sends the protein's repair mechanisms into a downward spiral. Kelly's research team dubbed this region a self-destructive "hotspot."

"The hotspot region on mutated BRCA1 renders the protein more vulnerable to cellular degradation," said Kelly, who also is an associate professor of biological sciences in Virginia Tech's College of Science. "We found that we could remove the signaling tag in the BRCA1 hotspot, and make the protein look perfectly normal.

Kelly and her team are now testing the behavior of mutated BRCA1 proteins they've restored to normal appearance.

"If the protein looks normal, does it also act normally?" Kelly asked. "If so, we may be able to restore the protein's ability to fight cancer-causing processes."

According to Kelly, if the restored protein behaves as normally as it looks, there could be a future treatment in which people with this particular BRCA1 mutation could simply take a pill to prevent their cells from destroying their BRCA1 proteins in the first place.

"We know that mutations in BRCA1 are linked to aggressive forms of hereditary cancer, and that targeting the molecule with anti-cancer drugs could save lives.

However, how to target the molecule and how to develop those drugs were unclear--because no one has ever seen the BRCA1 structure in its entirety," said Erica Ollmann Saphire, a professor of immunology and microbial science at The Scripps Research Institute. She was not involved in this study. "By revealing the structure of this cancer-related protein for the first time, the Kelly lab and VTCRI have provided the road map to developing new anti-cancer therapeutics. This structure will also open new avenues for research to understand the mechanisms of cancer and prevention."

Elizabeth Alli, an assistant professor in the department of cancer biology at Wake Forest University School of Medicine who studies BRCA1 and its role in DNA repair, said Kelly and her team employed an innovative approach to describe a structural defect in the mutated form of BRCA1 and to demonstrate that the mutant structure may be restored by enzymatic manipulation.

"It's a very exciting study that highlights the importance and utility of three-dimensional structural analyses," said Alli, who was not involved in the study. "These data provide key information that may be further explored to better understand the tumor suppressor function of BRCA1 and to develop new strategies for the prevention or treatment of BRCA1-mutated cancers."

“We’re still years away from a preventative or restorative treatment, but our ability to see BRCA1 in three dimensions is providing new insights for rational drug design and the real possibility of bringing a precision medicine approach to this disease,” Kelly said. “We’re beginning to understand the mechanisms of the cancer clock and how to stop the ticking.”

Michael Friedlander, the founding executive director of the Virginia Tech Carilion Research Institute, spoke highly of Kelly’s contributions to both the Institute and science overall.

“We were extremely fortunate to recruit Dr. Kelly to the VTCRI from Harvard as one of the original institute research team leaders,” said Friedlander, who is also Virginia Tech’s vice president for health sciences and technology. “Debbie has met and exceeded our expectations, developing a premiere structural biology research enterprise, applying powerful molecular imaging and computational approaches to develop new insights into cancer. Her latest work on the structure of the BRCA1 protein in triple-negative breast cancer and the development of a new strategy for potentially ameliorating the structural and functional deficit is absolutely paradigm shifting.”

This work was funded by the Commonwealth Health Research Board, the Concern Foundation, the National Institutes of Health’s National Cancer Institute, and the University of Virginia-Virginia Tech Carilion Neuroscience Seed Fund Award.