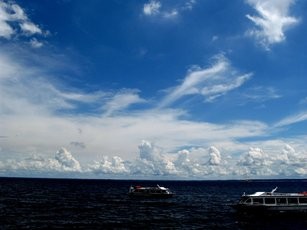 Clouds over the Amazon in the wet season (Feb. 2008), when there is little biomass burning. These puffy, cumulus clouds can reach 10 m in height, and are typically cleaner than those formed over burning forest. 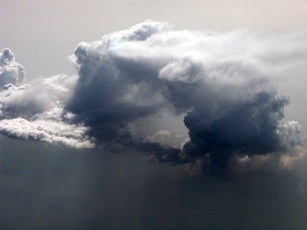 Cloud towers forming high above smoke; photographed during the Amazon dry season (Sept. 2007), when smoke blanketed the continent from the Amazon to Argentina. 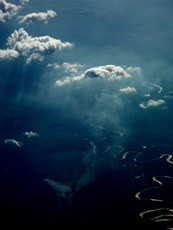 Small cloud forms above a layer of smoke from the burning forest below.

Newswise — Tons of soot are released into the air annually as forest fires rage from California to the Amazon to Siberia and Indonesia. Climate scientists have generally assumed that the main effect of smoke on climate is cooling, as the floating particles can reflect some solar energy back to space as well as increasing cloud size and lifespan. But new research by scientists at the Weizmann Institute of Science; the University of Maryland, Baltimore County (UMBC); and NASA may cause them to rethink soot's role in shaping the Earth's climate.

Airborne particles such as soot " known collectively as aerosols " rise into the atmosphere where they interact with clouds. Understanding what happens when the two meet is extremely complicated, in part because clouds are highly dynamic systems that both reflect the sun's energy back into space, cooling the upper atmosphere, and trap heat underneath, warming the lower atmosphere and the Earth's surface. Aerosols, in turn, can have both heating and cooling effects on clouds. On the one hand, water droplets form around the aerosol particles, which may extend the cloud cover. On the other hand, particles, especially soot, absorb the sun's radiation, stabilizing the atmosphere and thus reducing cloud formation.

Dr. Ilan Koren and Hila Afargan of the Weizmann Institute's Environmental Sciences and Energy Research Department, together with colleagues from UMBC and NASA's Goddard Space Flight Center in Maryland, have, for the first time, developed an analytical model that puts all of these factors together to show when aerosols rising into the clouds will heat things up and when they will cool them off. The scientists tested their model on data from the Amazon, finding it reflected the true situation on the ground so accurately they could rule out the possibility that random changes in cloud cover " rather than aerosols from burning forests " were at work.

Their findings, which appear in the August 15, 2008 issue of Science, reveal that adding small quantities of aerosols into a clean environment can indeed produce a net cooling effect. As more and more particles enter the cloud layer, however, the effect progressively switches from cooling to heating mode. The researchers also found that the extent of the original cloud cover is important. A completely overcast sky prevents the sun's rays from reaching the aerosols, so the result may be additional cooling of the atmosphere and the Earth's surface. But the larger the ratio of open sky to clouds, the more aerosol particles absorb radiation, thus hastening the heating of the remaining cloud cover, reducing cloud cover, and heating the system.

An accurate model of the intricate relationship between clouds and aerosols has been a key missing piece in the picture of human-induced climate change. The scientists believe their findings may help both climate modelers and policy makers to understand the true climatic consequences of burning trees or sooty industrial fuels.

Dr. Ilan Koren's research is supported by the Sussman Family Center for the Study of Environmental Sciences; the Fusfeld Research Fund; and the Samuel M. Soref and Helene K. Soref Foundation.

The Weizmann Institute of Science in Rehovot, Israel, is one of the world's top-ranking multidisciplinary research institutions. Noted for its wide-ranging exploration of the natural and exact sciences, the Institute is home to 2,600 scientists, students, technicians, and supporting staff. Institute research efforts include the search for new ways of fighting disease and hunger, examining leading questions in mathematics and computer science, probing the physics of matter and the universe, creating novel materials, and developing new strategies for protecting the environment.