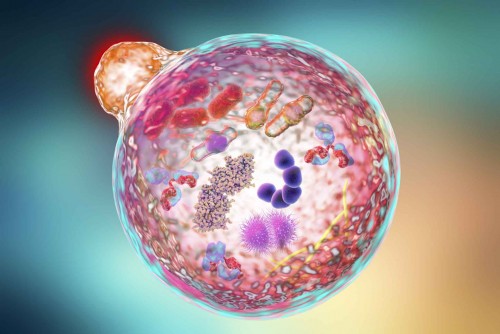 Newswise — La Jolla, Calif., July 5, 2017 – Researchers at Sanford Burnham Prebys Medical Discovery Institute (SBP) have undertaken the first ever comprehensive analysis of autophagy in a living animal during aging. “Autophagy,” which means “self-eating” based on its Greek roots, is the normal physiological process the body’s cells use to remove viruses, bacteria, and damaged material from the cell. Autophagy also helps cells “clean house” by recycling building blocks—similar to the way we recycle glass, plastic and metal. In recent years, defective autophagy has been linked to age-related diseases such as cancer, neurodegeneration and heart disease.

“Increasingly, researchers are asking whether there is an age-related decline in autophagy and if it’s connected to diseases that occur more frequently in older individuals,” says Malene Hansen, Ph.D., professor in the Development, Aging and Regeneration Program at SBP. “Exposing how autophagy becomes faulty with age may reveal opportunities for us to therapeutically intervene and correct the process to promote health aging.”

Autophagy is a dynamic, multi-step process that starts with the formation of a double-membrane sac in the cell cytoplasm called the isolation membrane (IM). These structures engulf cellular material and debris, expanding in size to form vesicles called autophagosomes (APs). Finally, APs fuse with lysosomes to form autolysosomes (ALs) that digest and release the breakdown products for re-use, much like a recycling plant would repurpose incoming trash.

“A major challenge with understanding how aging impacts autophagy is that researchers have been capturing a dynamic process with static measurements,” explains Jessica Chang, Ph.D., a former postdoc in Hansen’s lab and first author of the study. “Autophagy is most commonly monitored by counting the number of APs, which really only provides a snapshot of the process—similar to how counting the number of garbage trucks on the street doesn’t tell you how much garbage is actually being recycled at the plant. And typically older organisms have an increased number of APs, but we don’t know exactly why.”

“We wanted to ask how age impacts autophagy—is it at the beginning of the process by increasing the rate at which APs are formed, or, by analogy, how many garbage trucks are rolling out on the street—or is it at the end of the process by blocking the conversion of APs to ALs, i.e., how much recycling is taking place at the recycling plant. Either one of these scenarios would cause an increased number of APs, but knowing which one would help pinpoint where interventions may be helpful,” adds Chang.

“Like many labs, we use C. elegans—a tiny roundworm—as a model organism to reveal important lessons about aging and autophagy,” explains Hansen. “C. elegans is a powerful tool for biological research because it shares many of the same anatomic and cell functions as humans, and their short lifespan (average 17 days) enables us to study genes and measure cell traits in just two to three weeks.”

Previous studies in Hansen’s lab and others have suggested an increase in APs with age, but since the measurements were taken under steady-state conditions, it’s not clear what step(s) in the process led to increased levels.

In their new study, published yesterday in eLIFE, Hansen’s team went beyond the standard approach of counting APs under steady-state conditions. They counted the numbers of APs and ALs in different body tissues—intestine, muscle, pharynx (i.e., the animal’s foregut), and neurons—at different time points during the adult life of C. elegans, and used chemical blockers to learn more about the dynamics of the process.

“We found that there is indeed an age-dependent decline in autophagy over time in all tissues examined. We further provide evidence that the increase in APs results from an impairment at a step after APs are made.” says Hansen. “So basically the autophagy recycling process becomes incomplete with age by stopping somewhere after APs are formed.

“This research is important because it helps provide time- and site-of-action information for potential future interventions directed at sustaining autophagy to extend lifespan. Our next step will be to perform biochemical research to further pinpoint exactly how autophagy fails to complete its cycle, possibly providing targets to develop specific interventions.

“Our goal is to find links between autophagy and age-related diseases. By identifying distinct points in the process that fail, we hope to find ways to correct the defects and find ways to help people live longer, healthier lives,” Hansen adds.