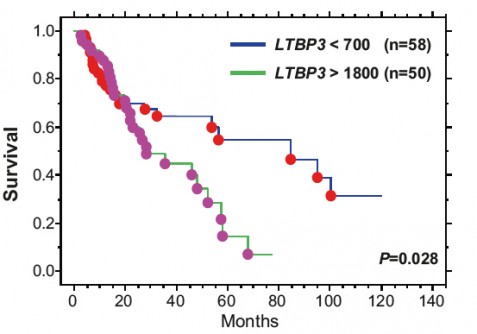 This curve shows a dramatic difference in survival between head and neck cancer patients with high LTBP3 expression levels (green) and low expression levels (blue). Researchers believe LTBP3 levels, detectable before cancer reaches stage 4, may be an indicator of patient outcomes in this particular cancer type.

Newswise — LA JOLLA, CA – Feb. 7, 2018 – New research from The Scripps Research Institute (TSRI) may give scientists a chance to target tumors before they metastasize. The study, published recently in the Nature research journal Oncogene, shows that a protein called LTBP3 fuels a chain reaction that leads some early developing tumors to grow new blood vessels. These vessels then act like highways to spread cancer cells throughout the body, seeding metastatic tumors very early on.

“Lower LTBP3 levels appear to be associated with better prognosis in patients with certain types of cancer,” says Elena Deryugina, PhD, an assistant professor at TSRI and first author of the new study. Deryugina led the collaborative study with senior authors James P. Quigley, PhD, a TSRI professor, and Daniel Rifkin, PhD, a professor at NYU School of Medicine.

Their research addresses a long-standing challenge in medicine. Over the years, a potent growth factor molecule called TGFβ has caught the eye of many cancer researchers. TGFβ has multiple roles in healthy people and in disease, and it can be both a promoter and suppresser of tumor cell growth. Although TGFβ has been a tempting cancer therapy target for a long time, scientists still do not know know how to dampen its harmful effects without interfering with its normal roles in the body.

As long-time collaborators, Deryugina and Quigley have led research that shows that the initial steps of tumor metastasis can occur when a primary tumor is barely detectable. This work sparked their interest in the role of LTBP3, short for Latent TGFβ Binding Protein 3. They knew that LTBP3 partners with TGFβ to regulate its secretion, activation and maturation, but wondered what else LTBP3 might control.

Could LTBP3 set TGFβ on its harmful path of action in early-stage tumors, and might LTBP3 have its own role, independent of TGFβ, in cancer metastasis?

Researchers used chick embryo tumor models and a rodent model of head and neck cancer to discover how LTBP3 is involved in the spread of aggressive tumor cells. They knocked down LTBP3 expression and secretion in human tumor cell lines representing carcinoma, head and neck carcinoma and a fibrosarcoma. In each model, the team found that without LTBP3, primary tumor cells could not metastasize efficiently.

“Our experimental findings showed that LTBP3 is active in the very early steps of metastatic spread,” says Quigley.

“Specifically, LTBP3 appears to help tumors grow new blood vessels in a process called angiogenesis, which is critical for tumor cell intravasation. That is when cancer cells enter into blood vessels of defined size and permeability,” adds Deryugina.

Importantly, the new data is in line with clinical findings that LTBP3 levels can indicate better overall survival in cancer patients with early-stage head and neck carcinomas.

Taken together, these findings suggest LTBP3 may be a good “upstream” drug target to treat early stage tumors without affecting more complex roles of TGFβ in other parts of the body.

Researchers next plan to investigate precisely how LTBP3 and TGFβ biochemically partner in the induction of new blood vessels deep within a tumor. 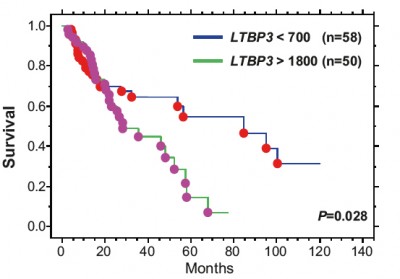