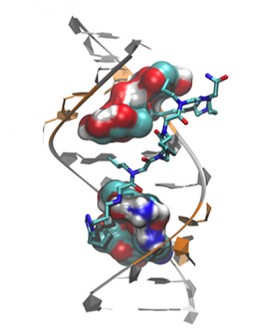 Scripps Florida scientists have revealed a detailed image of the genetic defect that causes myotonic dystrophy type 2, then used that information to design a drug candidate to counteract the disease.

Newswise — JUPITER, FL, January 2, 2013 – Scientists from The Scripps Research Institute have revealed an atomic-level view of a genetic defect that causes a form of muscular dystrophy, myotonic dystrophy type 2, and have used this information to design drug candidates with potential to counter those defects—and reverse the disease.

“This the first time the structure of the RNA defect that causes this disease has been determined,” said TSRI Associate Professor Matthew Disney, who led the study. “Based on these results, we designed compounds that, even in small amounts, significantly improve disease-associated defects in treated cells.”

Both types of myotonic dystrophy are inherited disorders that involve progressive muscle wasting and weakness, and both are caused by a type of genetic defect known as a “RNA repeat expansion,” a series of nucleotides repeated more times than normal in an individual’s genetic code. The repeat binds to the protein MBNL1, rendering it inactive and resulting in RNA splicing abnormalities—which lead to the disease.

Many other researchers had tried to find the atomic-level structure of the myotonic dystrophy 2 repeat, but had run into technical difficulties. In a technique called X-ray crystallography, which is used to find detailed structural information, scientists manipulate a molecule so that a crystal forms. This crystal is then placed in a beam of X-rays, which diffract when they strike the atoms in the crystal. Based on the pattern of diffraction, scientists can then reconstruct the shape of the original molecule.

Prior to the new research, which was published in an advance, online issue of the journal ACS Chemical Biology, scientists had not been able to crystallize the problematic RNA. The Scripps Florida team spent several years on the problem and succeeded in engineering the RNA to have crystal contacts in different positions. This allowed the RNA to be crystallized—and its structure to be revealed.

Using information about the RNA’s structure and movement, the scientists were able to design molecules to improve RNA function.

The new findings were confirmed using sophisticated computational models that show precisely how the small molecules interact with and alter the RNA structure over time. Those predictive models matched what the scientists found in the study—that these new compounds bind to the repeat structure in a predictable and easily reproducible way, attacking the cause of the disease.

“We used a bottom-up approach, by first understanding how the small components of the RNA structure interact with small molecules,” said Jessica Childs-Disney of TSRI, who was first author of the paper with Ilyas Yildirim of Northwestern University. “The fact that our compounds improve the defects shows that our unconventional approach works.”

The study was supported by the National Institutes of Health (grant R01 GM079235), the Muscular Dystrophy Association (grant 254929), TSRI and the PS-OC Center of the NIH (grant 1U54CA143869-01). About The Scripps Research Institute