The SeqCode is a universal system, created through collaboration of hundreds of scientists, to formally register and name single-celled microorganisms known as prokaryotes. 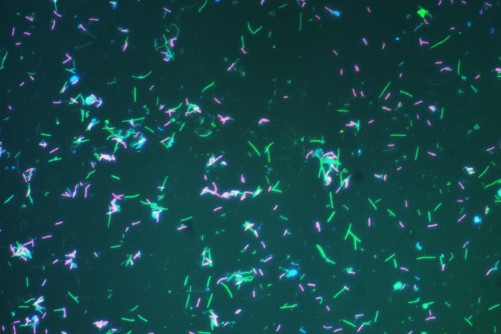 Newswise — What’s in a name? For microorganisms, apparently a lot.

Prokaryotes are single-celled microorganisms - bacteria are an example - that are abundant the world over. They exist in the oceans, in soils, in extreme environments like hot springs, and even alongside and inside other organisms including humans.

In short, they’re everywhere, and scientists worldwide are working to both categorize and communicate about them. But here’s the rub: Most don’t have a name.

Less than 0.2% of known prokaryotes have been formally named because current regulations – described in the International Code of Nomenclature of Prokaryotes (ICNP) – require new species to be grown in a lab and freely distributed as pure and viable cultures in collections. Essentially, to name it you have to have multiple physical specimens to prove it.

In an article published Sept. 19 in the journal Nature Microbiology, a team of scientists present a new system, the SeqCode, and a corresponding registration portal that could help microbiologists effectively categorize and communicate about the massive number of identified yet uncultivated prokaryotes.

“Our goal is to unite field and laboratory studies in microbiology and respond to significant recent advancements in environmental genomics by providing a path to formally name the majority of identified yet unnamed prokaryotes,” said UNLV microbiologist Brian Hedlund, lead author on the paper and key collaborator on the development of the SeqCode. “The SeqCode should serve the community by promoting high genome quality standards, good naming practice, and a well-ordered database.”

Nearly 850 scientists representing multiple disciplines from more than 40 countries participated in a series of NSF-funded online workshops in 2021 to develop the new SeqCode, which uses genome sequence data for both cultivated and uncultivated prokaryotes as the basis for naming them.

Since the 2000s, scientists who study prokaryotes in environments all over the world have used environmental genomics techniques to sample and study them, and hundreds of thousands of genome sequences are available in public databases. The community participating in the workshops, which were organized by Hedlund and colleague Anna-Louise Reysenbach from Portland State University, overwhelmingly supported the development of an alternative to the ICNP that would accept DNA sequence data and ultimately improve resources for researchers.

“The key pieces are in place for an orderly expansion of prokaryotic systematics to the entire prokaryotic tree of life,” said William B. Whitman, SeqCode corresponding author and University of Georgia microbiologist. “This expansion will serve the research and the broader community by providing a common language for all prokaryotes that is systematically organized and supported by data-rich genomic datasets and associated metadata.”

To qualify for inclusion in the SeqCode, genomes must meet rigorous scientific standards to ensure quality, stability, and open data sharing. And, though it’s not yet universally accepted, the SeqCode fundamentally aligns with established international principles for naming other organisms, including plants and animals.

“Any organism with a high-quality genome sequence - from a pure culture or not - can be named under the SeqCode,” said Hedlund. “We will also automatically accept all names formed under the ICNP. I expect through time that the SeqCode will be used much more frequently than the ICNP.”

One of the primary goals for the new system, authors argue, is to reverse a trend in the field where “unregulated” names are used in literature out of necessity. This can lead to mistakes that increase the likelihood of subsequent renaming later on, making it difficult for scientists to review and compare data and communicate effectively. Conversely, authors argue that the SeqCode “embraces findability, accessibility, interoperability, and reusability principles.”

Hedlund referenced Chlamydia and related organisms as an example. Since these organisms can’t be grown, stored, or distributed as pure cultures, they’re currently unable to be officially named.

“It could be pretty confusing for clinicians to not have valid names for newly discovered chlamydiae,” says Hedlund. “There’s a risk of those names being poorly cataloged, which could stifle tracking of disease outbreaks and communication among scientists, doctors, and the public.”

Despite its intended goal to create clarity and synergy with accepted standards for naming, the move is not without controversy.

The SeqCode follows a previous attempt by scientists to modify the ICNP to allow uncultivated prokaryotes to be named based on having a DNA sequence that would serve as the evidence (or 'type') for the organism - as opposed to the ICNP rules now which require a culture into two permanent collections.

In 2020, a team led by Desert Research Institute biologist Alison Murray published a paper, also in Nature Microbiology, that was co-authored or endorsed by nearly 120 scientists representing 22 countries calling for action on the proposed modifications of the ICNP to accept DNA sequences as types or to go an alternate route. However, the proposed modifications were rejected by the International Committee on Systematics of Prokaryotes, the group responsible for governing the naming of prokaryotes.

“It is clear that the global community of scientists is ready for a paradigm change in how we name prokaryotes - to be inclusive of the breadth of prokaryotic life,” said Murray. “Modern genome technologies can resolve genomes of uncultivated organisms at the high degree of precision needed to ensure integrity and provide stability to the field of microbiology. Naming these taxa is the way to communicate their existence, their evolutionary history and predict their physiological capabilities.”

The 2020 setback led to a redoubling of efforts among the growing cadre of scientists and, ultimately, the “alternative route” which led to the formation of the SeqCode.

“Many people came to the table to share their perspectives, their energy, and their skills to make it happen,” said Hedlund. “The response to our workshops from scientists all over the world was incredible and helped validate why the time has come to formally make a change in how prokaryotes are named.”

Tension still exists among some scientists, who argue that less can be known about uncultivated prokaryotes than those that can be grown and manipulated in a lab as pure cultures. Additionally, nuances in processing and interpreting DNA sequence data could potentially lead to erroneous conclusions, a point that Hedlund claims is also true of studies of pure cultures.

The authors say this new system is not intended to discourage traditional cultivation of prokaryotes, but instead is designed by the scientific community to improve communication across the microbial sciences.

“We view this ‘SeqCode v.1.0’ as a necessary first step toward a unified system of nomenclature to communicate the full diversity of prokaryotes and we will cooperate with the community toward the realization of this vision,” authors write.

The paper, “SeqCode: a nomenclatural code for prokaryotes described from sequence data” was published Sept. 19 in the journal Nature Microbiology.  Learn more about the SeqCode at https://seqco.de/