CRISPR gene editing has transformed research, but it is not perfect, and can sometimes target unintended genes. To watch CRISPR enzymes respond to different genes, Leipzig University researchers developed a new method using DNA origami and were able to measure their response to matched and mismatched gene sequences. 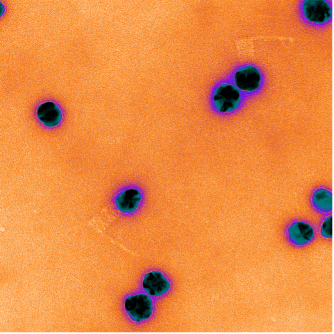 Electron microscopy image of DNA origami rotor arms, which are the faint orange “L’s” attached to the purple tracking particles.

Newswise — ROCKVILLE, MD – The remarkable genetic scissors called CRISPR/Cas9, the discovery that won the 2020 Nobel Prize in Chemistry, sometimes cut in places that they are not designed to target. Though CRISPR has completely changed the pace of basic research by allowing scientists to quickly edit genetic sequences, it works so fast that it is hard for scientists to see what sometimes goes wrong and figure out how to improve it. Julene Madariaga Marcos, a Humboldt postdoctoral fellow, and colleagues in the lab of Professor Ralf Seidel at Leipzig University in Germany, found a way to analyze the ultra-fast movements of CRISPR enzymes, which will help researchers understand how they recognize their target sequences in hopes of improving the specificity. Madariaga Marcos will present the research on Tuesday, February 23 at the 65th Annual Meeting of the Biophysical Society.

To use CRISPR enzymes to edit gene sequences, scientists can tailor them to target a specific sequence within the three billion DNA base pairs in the human genome. During target recognition CRISPR enzymes untwist the DNA strands to find a sequence that is complementary to CRISPR’s attached RNA sequence. But sometimes the RNA matches to DNA sequences that are not quite complementary. To troubleshoot this unintended match, scientists need to be able to observe how CRISPR is acting along individual DNA base pairs, but the process is fast and difficult to observe.

To measure CRISPR’s actions on an ultra-fast timescale, Madariaga Marcos and colleagues turned to DNA origami, which uses special DNA sequences to form complex three-dimensional nanostructures instead of a simple double helix. DNA origami has applications in drug delivery, nanoelectronics, and even art. Using DNA origami, they built rotor arms out of DNA so that they could watch with a high-speed camera on a microscope the untwisting of the DNA by CRISPR enzymes, causing the rotor arm to spin like helicopter blades. With this system, they were able to measure the different responds to matches and mismatches within the DNA sequence. “We are able to directly measure the energy landscape of CRISPR/Cascade when it interacts with DNA for the first time,” said Madariaga Marcos.

This technique will help scientists better understand CRISPR enzymes, and how they ultimately land on their match. That way, they can figure out how to optimize CRISPR so it makes fewer off-target matches. In the future, Madariaga Marcos is interested in “developing more tools and methods for studying these gene editing processes in new ways and at a more detailed level.”