Tissue engineering could transform medicine. Instead of waiting for our bodies to regrow or repair damage after an injury or disease, scientists could grow complex, fully functional tissues in a laboratory for transplantation into patients.

Proteins are key to this future. In our bodies, protein signals tell cells where to go, when to divide and what to do. In the lab, scientists use proteins for the same purpose — placing proteins at specific points on or within engineered scaffolds, and then using these protein signals to control cell migration, division and differentiation.

But proteins in these settings are also fragile. To get them to stick to the scaffolds, researchers have traditionally modified proteins using chemistries that kill off more than 90% of their function. In a paper published May 20 in the journal Nature Materials, a team of researchers from the University of Washington unveiled a new strategy to keep proteins intact and functional by modifying them at a specific point so that they can be chemically tethered to the scaffold using light. Since the tether can also be cut by laser light, this method can create evolving patterns of signal proteins throughout a biomaterial scaffold to grow tissues made up of different types of cells.

"Proteins are the ultimate communicators of biological information," said corresponding author Cole DeForest, a UW assistant professor of chemical engineering and bioengineering, as well as an affiliate investigator with the UW Institute for Stem Cell & Regenerative Medicine. "They drive virtually all changes in cell function — differentiation, movement, growth, death."

For that reason, scientists have long employed proteins to control cell growth and differentiation in tissue engineering.

"But the chemistries most commonly used by the community to bind proteins to materials, including scaffolds for tissue engineering, destroy the overwhelming majority of their function," said DeForest, who is also a faculty member in the UW Molecular & Engineering Sciences Institute. "Historically, researchers have tried to compensate for this by simply overloading the scaffold with proteins, knowing that most of them will be inactive. Here, we've come up with a generalizable way to functionalize biomaterials reversibly with proteins while preserving their full activity."

Their approach uses an enzyme called sortase, which is found in many bacteria, to add a short synthetic peptide to each signal protein at a specific location: the C-terminus, a site present on every protein. The team designs that peptide such that it will tether the signal protein to specific locations within a fluid-filled biomaterial scaffold common in tissue engineering, known as a hydrogel.

Targeting a single site on the signal protein is what sets the UW team's approach apart. Other methods modify signal proteins by attaching chemical groups to random locations, which often disrupts the protein's function. Modifying just the C-terminus of the protein is much less likely to disrupt its function, according to DeForest. The team tested the approach on more than half a dozen different types of proteins. Results show that modifying the C-terminus has no significant effect on protein function, and successfully tethers the proteins throughout the hydrogel.

Their approach is analogous to hanging a piece of framed art on a wall. Instead of hammering nails randomly through the glass, canvas and frame, they string a single wire across the back of each frame to hang it on the wall.

Untethering proteins is useful in hydrogels because cells could then take up those signals, bringing them into the cell's interior where they can affect processes like gene expression.

DeForest's team tested the photorelease process using a hydrogel loaded with epidermal growth factor, a type of protein signal. They introduced a human cell line into the hydrogel and observed the growth factors binding to the cell membranes. The team used a beam of laser light to untether the protein signals on one side of an individual cell, but not the other side. On the tethered side of the cell, the proteins stayed on the outside of the cell since they were still stuck to the hydrogel. On the untethered side, the protein signals were internalized by the cell.

"Based on how we target the laser light, we can ensure that different cells — or even different parts of single cells — are receiving different environmental signals," said DeForest.

This unique level of precision within a single cell not only helps with tissue engineering, but with basic research in cell biology, added DeForest. Researchers could use this platform to study how living cells respond to multiple combinations of protein signals, for example.  This line of research would help scientists understand how protein signals work together to control cell differentiation, heal diseased tissue and promote human development.

"This platform allows us to precisely control when and where bioactive protein signals are presented to cells within materials," said DeForest. "That opens the door to many exciting applications in tissue engineering and therapeutics research."

Lead author on the paper is Jared Shadish, a UW doctoral student in chemical engineering. Co-author is Gabrielle Benuska, a UW undergraduate alumna who is currently an analyst for Point B Consulting. The research was funded by the National Science Foundation and the University of Washington. 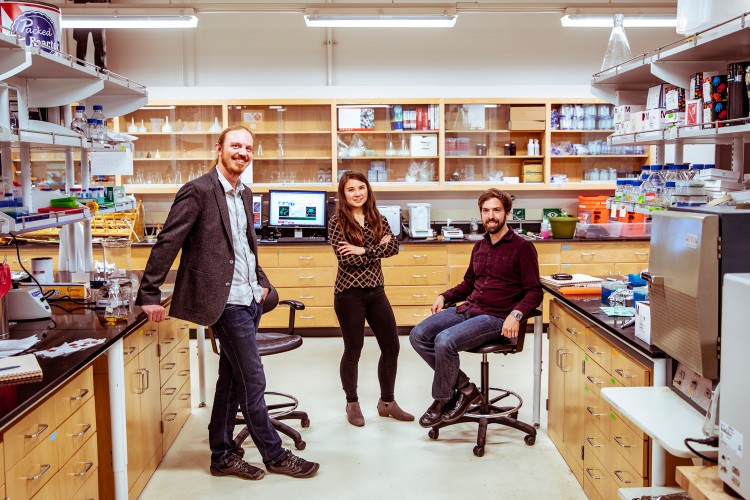 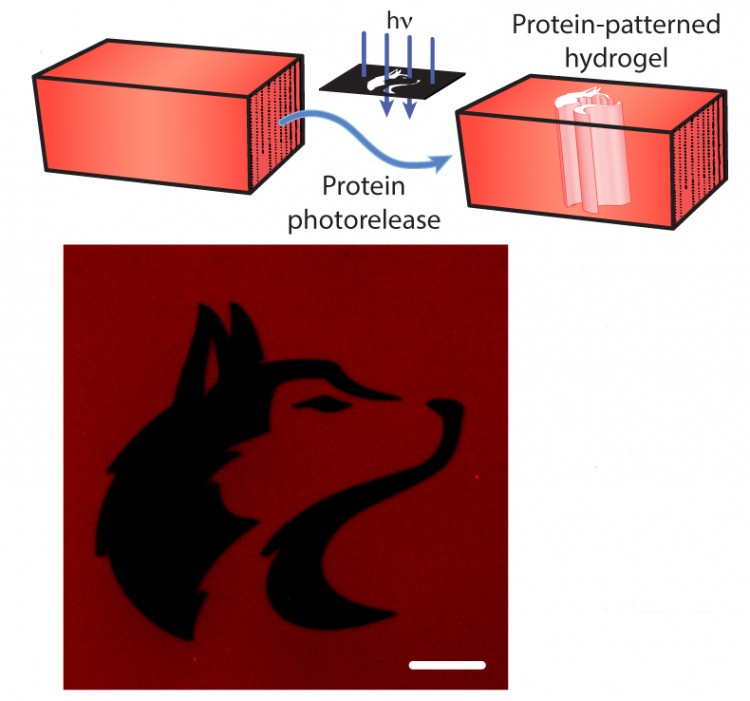 Caption: Photorelease of proteins from a hydrogel. Top: The mCherry red fluorescent proteins are tethered to the hydrogel. Researchers can cleave the tether with directed light (blue arrows), releasing the mCherry from the hydrogel (blue arrows). Bottom: An image of the hydrogel after mCherry release patterned in the shape of the University of Washington mascot (black). Scale bar is 100 micrometers.

Caption: Photorelease of epidermal growth factor (EGF) proteins on one side of a human cell. Left: EGF (green) is tethered to a hydrogel a single human cell (center). The cell membrane binds EGF, making its membrane green. Middle: The hydrogel after using a laser to untether and release EGF proteins on the top portion of the cell. Right: An image showing the difference in green fluorescent color between post- and pre-release images. Note the increase in color in the top portion of the cell, which indicates that the cell has started to internalize the untethered EGF proteins but only on one side. Scale bar is 10 micrometers.