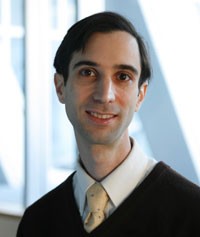 Jason Gaglia, M.D., M.M.Sc., Assistant Investigator in the Section of Immunobiololgy at Joslin and Assistant Professor of Medicine at Harvard Medical School.

Newswise — BOSTON – (February 17, 2015) – A pilot study led by researchers at Joslin Diabetes Center has revealed that it is possible to use magnetic resonance imaging (MRI) to "see" the inflammation in the pancreas that leads to type 1 diabetes. This discovery could be a boon for research on methods to slow or halt the disease at an early stage, and could also guide insights into how diabetes progresses.

This clinical study, published in the Proceedings of the National Academy of Sciences, tested the possibility of imaging inflammation in the pancreas of human volunteers using ferumoxytol, a coated iron nanoparticle approved by the FDA as an iron replacement therapy, and MRI. Ferumoxytol leaks out of blood vessels in areas of inflammation and is taken up by immune cells called macrophages, which congregate at sites of inflammation. (AMAG Pharmaceuticals, which markets ferumoxytol under the name Feraheme®, was not involved in the study .)

"Many people have genetic variants that put them at risk for type 1 diabetes," explains study co-lead author Jason Gaglia, M.D., M.M.Sc., an Assistant Investigator in the Section of Immunobiololgy at Joslin. "Some develop autoimmunity, but only a small number develop clinical disease."

In addition, the development of therapies that could potentially halt patients' progression from pancreatic inflammation to diabetes has been hampered by the long lead times needed in order to tell whether a given therapy has an effect.

"If you want to study in people an immunodulatory agent right now, for diabetes it takes years," Gaglia says. He explains that the end measurements for whether such therapies work relate directly to pancreatic function, changes in which may not become apparent for a long time. With imaging, he continues, "you could have an answer in a matter of months."

For the study, Gaglia and his collaborators, including study co-lead author Mukesh Harisinghani, M.D., of Massachusetts General Hospital, recruited 11 patients with newly diagnosed type 1 diabetes and evidence of antibodies against the pancreas, a sign that their beta cells were under inflammatory attack. They also recruited 10 controls with no sign or family history of diabetes.

To visualize inflammation across the whole pancreas, the researchers adapted MRI mapping algorithms originally developed for whole brain scanning. All other components of the experiment, including MRI equipment and ferumoxytol, are widely available. Gaglia notes that the ferumoxytol dose used in this imaging study is approximately one quarter of the dose used therapeutically for iron replacement. "These are all off-the-shelf components," he says. "Other centers can do this now."

Ferumoxytol-MRI images of the patient group showed clear evidence of ferumoxytol accumulation in the pancreas, indicating ongoing inflammation. By comparison, images from the control group did not.

The researchers believe this imaging technique could have a range of applications in diabetes research and help build a better understanding of the natural history of type 1 diabetes. Already, Gaglia says, the ferumoxytol-MRI images reveled that in their patient group, "inflammation was not uniform across the entire pancreas. There was also a large amount of variation between individuals, which aligns with what you see clinically. That’s never been shown in living humans before."

"Only about five percent of the first degree family members of a person with diabetes will develop occult disease," Gaglia, who is firm that for the moment this imaging technique should only be used in the context of research. "It might make sense to scan people in that group to see who is likely to progress and who isn’t. Those who are progressing may be the ones you would want to recruit for research on immunomodulatory therapies."

Other contributors to this PNAS study include Iman Aganj, Gregroy Wojtkiewicz, Sandeep Hedgire, and Ralph Weissleder of Massachusetts General Hospital; and Christophe Benoist and Diane Mathis of Harvard Medical School.

About Joslin ResearchJoslin Research comprises the most comprehensive and productive effort in diabetes research under one roof anywhere in the world. With 30‐plus faculty‐level investigators, Joslin researchers focus on unraveling the biological, biochemical and genetic processes that underlie the development of type 1 and type 2 diabetes and related complications.