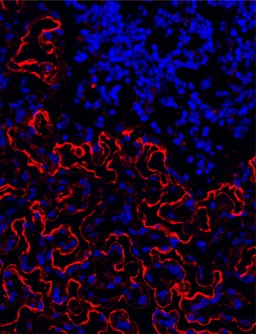 This molecular image shows immunofluorescence staining in the soft spongy section of trabecular bone in the femur of a young mouse. Red staining reveals the abundant presence of the protein osteopontin (OPN) in bone and endosteum of the marrow cavity, which is important to maintaining a healthy environment for blood-forming hematopoietic stem cells. Shown in blue are cell nuclei. Researchers report March 2 in the journal EMBO that restoring depleted osteopontin in aging bone marrow can rejuvenate the production of HSCs. The image was taken by Mehmet Sacma, Institute of Molecular Medicine, University of Ulm, Germany.

Newswise — CINCINNATI – As people get older so do the hematopoietic stem cells (HSCs) that form their blood, creating an increased risk for compromised immunity and certain blood cancers. Now researchers are reporting in the scientific journal EMBO that the bone marrow niche where HSC’s form also ages, contributing to the problem.

In a study published March 2, scientists from the University of Ulm in Germany and Cincinnati Children’s Hospital Medical Center in the United States propose rejuvenating the bone marrow niche where HSCs are created. This could mean younger acting HSCs that form healthier blood cells, boosted immunity in older people, and a better defense mechanism against certain cancers, according to study authors.

Conducting their study in mouse models, the scientists point to cells in the bone marrow called osteoblasts, which help form bone. Osteoblasts make a protein called osteopontin, which is important to supporting a vibrant bone marrow environment in the creation of blood-forming HSCs.

“We show that the place where HSCs form in the bone marrow loses osteopontin upon aging, but if you give back the missing protein to the blood-forming cells they suddenly rejuvenate and act younger,” says Hartmut Geiger, PhD, study lead investigator at the Institute for Molecular Medicine and Aging Research Center at the University of Ulm, and the Division of Experimental Hematology and Cancer Biology at Cincinnati Children’s. “Our study points to exciting novel ways to have a better immune system and possibly less blood cancer upon aging by therapeutically targeting the place where blood stem cells form.”Because the study was in mice, its findings cannot at this stage be extended to clinical treatment of human patients, the authors say. But the data provide interesting leads that one day could benefit human health.

Bone marrow time warp The researchers conducted a number of experiments to test the formation and vitality of cells in and near the bone marrow microenvironment. One test in aging mice looked at the formation of endosteum stroma cells, which form a thin layer of connective tissue on the inner surface of bones. Another experiment monitored levels of osteopontin and other proteins linked to distinct cells in bone marrow during the aging process.

Study authors say they observed reduced production of osteoblasts and other stroma cells in the endosteum of older mice. They also saw decreased osteopontin protein levels in the bone marrow of older animals, which they note was associated with reduced vigor and function of blood-forming HSCs.

Transplantation into the younger animals caused cells to act in a younger more vital manner, the authors report. This includes the presence of smaller numbers of HSCs with greater potential for forming different types of blood cells, which included larger populations of B and T cells and smaller production of myeloid cells.

The authors also saw aged HSCs treated with recombinant osteopontin regain their youthful characteristics and capacity to form different blood-cell types. Also observed was diminished signaling of the protein Cdc42, a protein that Geiger and his team previously showed causes HSCs to age.

Osteopontin levels are not only low in the bone marrow niche, but also in the blood upon aging. As a follow up to the current study, the researchers are investigating the possibility to use osteopontin replacement therapy in mice to counter the influence of an aging niche directly in the animals.

First author on the paper was Novella Guidi, a PhD student and member of the Geiger laboratory. Funding support for the study came from the Deutsche Forschungsgemeinschaft (KFO 142 and SFB 1074), the BMBF-funded Program SyStaR, and the National Institutes of Health (HL076604, DK077762, AG040118).