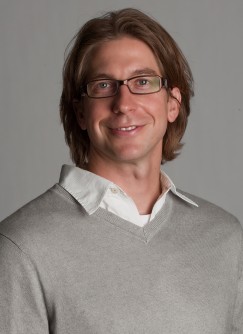 Gavin Rumbaugh is a neuroscientist at the Florida campus of The Scripps Research Institute.

Newswise — JUPITER, FL, April 2, 2015 – Scientists from the Florida campus of The Scripps Research Institute (TSRI) have been awarded $3.3 million by the National Institutes of Health (NIH) to identify biomarkers to accelerate drug development for disorders including autism spectrum disorder, epilepsy and some types of intellectual disability.

Gavin Rumbaugh, a TSRI associate professor, is the principal investigator of the new five-year project.

“Our long-term goal is to increase the success rate of therapies translated from animal models to patients,” Rumbaugh said. “By validating biomarkers in mice and using this information in combination with pharmacological or genetic treatment strategies, we hope to create a set of tools and methods that can be used successfully to develop new therapeutics.”

Rumbaugh has been a pioneer in the study of Syngap1, one of the most commonly disrupted genes in patients with sporadic developmental disorders of the brain. His work in animal models has shown that life-long cognitive disruptions are caused by isolated damage to developing neurons in the forebrain (in humans, the forebrain is responsible for higher cognitive processes, such as language and reasoning).

Rumbaugh and his colleagues plan to validate several highly quantifiable biomarkers of brain damage that occur in these animal models during a critical period of early development. Because abnormal cognition in these models can be traced to this early developmental window, these measures have the potential to provide a roadmap of cognitive ability to guide drug design.