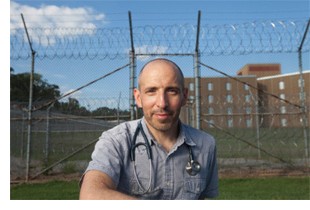 Dr. David Wohl, an associate professor of infectious diseases at the University of North Carolina School of Medicine, is lead author of the study.

Newswise — CHAPEL HILL, N.C. – More than 90 percent of HIV-infected inmates entering prison in North Carolina had previously tested positive for the virus, according to a study published in the November 27 issue of the Journal of the American Medical Association.

A significant proportion of people with HIV in the United States enter the prison system each year, and many have believed that screening new inmates for HIV would yield many new diagnoses. “We found that was not the case, and that few of the HIV-positive individuals coming into state prison in North Carolina had not previously been diagnosed with HIV,” said Dr. David Wohl, an associate professor of infectious diseases at the University of North Carolina School of Medicine and the lead author of the paper.

Wohl and his team tested 22,134 inmates entering prison between 2008 and 2009 for HIV using excess blood collected for mandatory syphilis testing. Overall, 1.45 percent (320) of these inmates tested HIV-positive. Merging test results with records from the N.C. Department of Health and Human Services revealed that all but 20, or 93.8 percent, of these inmates had a record of a positive HIV test prior to their incarceration.

The relatively low prevalence of undiagnosed HIV among those entering state prison suggests that an emphasis on screening incoming inmates to detect HIV may not be warranted. “Other at-risk populations with higher levels of undiagnosed HIV infection may constitute a higher priority for screening for HIV than prisoners. Of all new HIV diagnoses in North Carolina in 2008-2009, less than 2 percent were prison entrants,” the authors concluded.

At the time the study was conducted, HIV testing in the North Carolina state prison system was voluntary. In July 2013, the state passed a bill requiring all prisoners to be tested for HIV at entry, every four years during incarceration, and at release.

Study co-authors are Carol Golin, MD, Jeanine May, PhD, and Becky White, MD, of the UNC Sheps Center for Health Services Research and David Rosen, PhD, of the UNC School of Medicine.