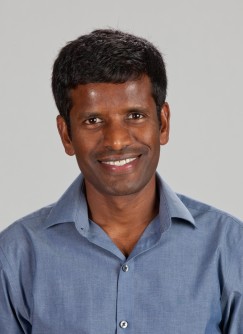 Srini Subramaniam is an assistant professor in the Department of Neuroscience at The Scripps Research Institute, Florida campus.

Newswise — JUPITER, FL – January 23, 2014 – Scientists from the Florida campus of The Scripps Research Institute have identified a critical regulator of a molecule deeply involved in the progression of Alzheimer’s disease.

The new study, published in an advance, online edition of the Journal of Biological Chemistry, shows for the first time that levels of this regulating protein are decreased in the brains of Alzheimer’s disease sufferers and that this decrease could be a significant factor in the advance of the disease.

The regulator is known as Rheb, a protein that many believe may be active in neural plasticity, the ability of the brain to change in response to learning. In the new study, the scientists found that Rheb binds and regulates activity of a molecule known as BACE1, an important enzyme in Alzheimer’s disease pathology, establishing for the first time a new molecular link between Rheb and BACE1.

“We found that Rheb regulates BACE1, which is a major drug target in Alzheimer’s disease,” said Srini Subramaniam, a TSRI biologist who led the study. “Studies of the autopsied brains of Alzheimer’s patients have found a significant reduction in Rheb, so it is possible that an increase in Rheb could reverse the buildup of amyloid plaque.”

The study noted that in some genetically modified animal models, an increase of Rheb has already been shown to reduce BACE1 levels and the production of amyloid plaque.

“If we can uncover the mechanism by which Rheb alters BACE1 levels, that would be a very good drug target,” said Neelam Shahani, a first author of the study with William Pryor, both research associates in the Subramaniam lab. The new study indicates that Rheb degrades BACE1 through a number of pathways, but more research needs to be done before drug candidates can be developed.

In addition to Subramaniam, Shahani and Pryor, other authors of the study, “Rheb GTPase Regulates β-Secretase Levels and Amyloid β Generation,” include Supriya Swarnkar of TSRI; Nikolai Kholodilov and Robert E Burke of Columbia University; and Gopal Thinakaran of The University of Chicago. For more information, see http://www.jbc.org/content/early/2013/12/24/jbc.M113.532713

This work was supported by the O’Keeffe Neuroscience Scholar Award and by the State of Florida.