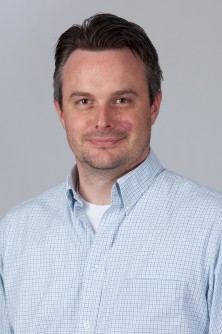 Matthew Disney is a professor on the Florida campus of The Scripps Research Institute.

Newswise — JUPITER, FL – May 9, 2016 – In a development that could lead to a new generation of drugs to precisely treat a range of diseases, scientists from the Florida campus of The Scripps Research Institute (TSRI) have for the first time designed a drug candidate that decreases the growth of tumor cells in animal models in one of the hardest to treat cancers—triple negative breast cancer.

“This is the first example of taking a genetic sequence and designing a drug candidate that works effectively in an animal model against triple negative breast cancer,” said TSRI Professor Matthew Disney. “The study represents a clear breakthrough in precision medicine, as this molecule only kills the cancer cells that express the cancer-causing gene—not healthy cells. These studies may transform the way the lead drugs are identified—by using the genetic makeup of a disease.”

The study, published online ahead of print the week of May 9, 2016, by the journal Proceedings of the National Academy of Sciences, demonstrates that the Disney lab’s compound, known as Targaprimir-96, triggers breast cancer cells to kill themselves via programmed cell death by precisely targeting a specific RNA that ignites the cancer.

Short-Cut to Drug Candidates While the goal of precision medicine is to identify drugs that selectively affect disease-causing biomolecules, the process has typically involved time-consuming and expensive high-throughput screens to test millions of potential drug candidates to identify those few that affect the target of interest. Disney’s approach eliminates these screens.

MicroRNAs are short molecules that work within all animal and plant cells, typically functioning as a “dimmer switch” for one or more genes, binding to the transcripts of those genes and preventing protein production. Somehave been associated with diseases. For example, microRNA-96, which was the target of the new study, promotes cancer by discouraging programmed cell death, which can rid the body of cells that grow out of control.

In the new study, the drug candidate was tested in animal models over a 21-day course of treatment. Results showed decreased production of microRNA-96 and increased programmed cell death, significantly reducing tumor growth. Since targaprimir-96 was highly selective in its targeting, healthy cells were unaffected.

In contrast, Disney noted, a typical cancer therapeutic targets and kills cells indiscriminately, often leading to side effects that can make these drugs difficult for patients to tolerate.

“In the future we hope to apply this strategy to target other disease-causing RNAs, which range from incurable cancers to important viral pathogens such as Zika and Ebola,” added Research Associate Sai Pradeep Velagapudi, the first author of the study and a member of the Disney lab.

In addition to Disney and Velagapudi, authors of the study, “Design of a Small Molecule Against an Oncogenic Non-coding RNA,” were Michael D. Cameron, Christopher L. Haga, Laura H. Rosenberg, Marie Lafitte, Derek Duckett and Donald G. Phinney of TSRI.

The work was supported by the National Institutes of Health (R01GM9455) and The Nelson Fund for Therapeutic Development.