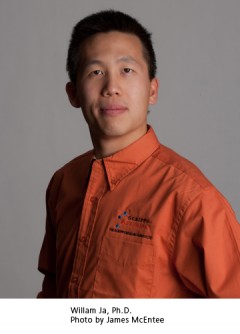 William Ja, a TSRI assistant professor, is the principal investigator for the five-year study.

During critical periods of growth and development, particularly during early stages of life, animals are highly sensitive to nutrition—or lack of it—and modify their metabolism accordingly. This “nutritional-priming” phenomenon causes physiological changes that can persist throughout life and can have a marked impact on life-long health. In humans, imbalanced nutrition during early childhood greatly influences future health and development, and poor diets during early growth periods can increase the likelihood of developing obesity, diabetes and heart disease in later life. “This study will provide new strategies to develop drug candidates that could reverse the effects of a poor early diet—and that have the potential to improve human healthspan,” Ja said. In addition, he noted, the cellular mechanisms underlying the effects of early diet on metabolism and aging have been largely unexplored. Unraveling those fundamental mechanisms are a primary aim of the new study. Because multiyear, longitudinal studies—research done on a single group of individuals over an extended period of time—can be costly and difficult, Ja and his colleagues will first tackle the problem using the fruit fly, Drosophila melanogaster, a reliable and commonly used model, to investigate the role of early nutrition on lifespan and overall health. “How poor nutrition affects aging is difficult to test in humans,” said Kimberley Bruce, a postdoctoral associate in the Ja laboratory who will spearhead the study. “But fruit flies live 80 days rather than 80 years, so we can rapidly see how different diets alter lifespan.”

For example, preliminary data generated by TSRI graduate student Sany Hoxha showed that even a brief exposure to a high-protein diet during early adulthood—a critical period of both fly and human development—reduces lifespan compared to animals fed a low protein diet during the same period.

“Protein stimulates the same aging pathways in flies as in humans,” Bruce added. “It has not been well studied, but we think excessive protein intake in early life may also have a negative effect on human aging.”