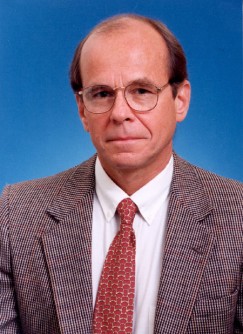 Nobel laureate K. Barry Sharpless, PhD, is the W.M. Keck Professor of Chemistry and member of the Skaggs Institute for Chemical Biology at The Scripps Research Institute.

The new SuFEx—Sulfur Fluoride Exchange—reactions enable chemists to link molecules of their choice together using derivatives of a common commercial chemical considered essentially inert. The Sharpless team made this chemical reliably and predictably reactive. Astonishingly, acid-base constraints are rarely a concern, though they are central to nature's chemistry and an enormous hurdle for chemists. The stabile linkers are also non-polar and can enter cells, so have potential for crossing the blood-brain barrier.

“This is a new, emergent phenomenon,” said Sharpless, the W.M. Keck Professor of Chemistry and member of the Skaggs Institute for Chemical Biology at TSRI. Click chemistry, conceived in the mid-90s as a method for discovering new and improving existing chemical reactivity, became universally used in the chemical sciences after the 2002 discovery of copper-catalyzed azide-alkyne cycloaddition (CuAAC). Now SuFEx is the second “perfect” click reaction to be discovered at TSRI.

The findings by Sharpless and his colleagues were reported online ahead of print by the international chemistry journal Angewandte Chemie.

Sharpless shared the 2001 Nobel Prize in Chemistry for his discovery and development during the 80s of asymmetric catalytic reactions. Nature routinely makes “handed” molecules like DNA, which is like a spiral staircase you enter on the left, but chemists could not reliably make left- or right-handed molecules. The Sharpless asymmetric reactions gave chemists that gift with general reactions that made either left- or right-handed products at will.

To a younger generation of scientists, however, Sharpless is famous for click chemistry. Conceived at TSRI in the mid-90s, it is Sharpless's modular approach for quickly discovering new, or improving existing, chemical function. True click reactions have guaranteed reliability and are environmentally "green," proceeding in water, under normal atmospheric conditions, and without significant byproducts. After the 2002 discovery of the copper-catalyzed azide-alkyne cycloaddition (CuAAC), click chemistry became universally used across the chemical sciences, especially in drug discovery, biology and materials science. Now SuFEx gives click chemistry even more power and reach.

“Sulfer fluoride compounds are known for their high stability, yet we eventually realized that there are ways to make them usefully reactive—the speed and varied reaction environment it tolerates is amazing,” said Jiajia Dong, a research associate at TSRI and lead author of the new report.

Life chemistry depends on phosphate and amide linkers which are polar, so constrained when entering or exiting cells and membranes. During its three billion-year adventure, nature never adopted sulfate links, yet SuFEx has been shown to be tolerated by and within the chemistry of life.

The breakthrough came by making SO2F2 reactive. SO2F2 is the commercial gas known as Vikane, the world's most common fumigant, used for tenting buildings to kill termites, as well as being pumped into vast warehouses to rid produce of potential disease vectors and extend shelf life. Applications Abound

One of the most exciting potential uses of SuFEx is the promise of finding new diagnostics, drugs and other therapeutics, even ones reactive within the human body. TSRI chemists are already using SuFEx reactivity for the precision assembly of new molecules from diverse building blocks. This should quickly lead to reduced manufacturing costs for equivalents of existing products, as well as the introduction of new products made by easy synthetic routes.

“We believe that we can, with near-perfect control, use sulfur fluorides as general connectors for joining molecular building blocks,” said Dong. The reaction easily creates polysulfate plastics, a whole class of unexplored of materials. Polysulfate plastics may, for example, have properties to rival or surpass those of popular, ubiquitous polymers like polycarbonates. Strong, resilient and transparent, polycarbonates are annually produced in the millions of tons and are found everywhere in consumer products, from DVDs to the cockpit canopies of F-22 Raptor jets. Yet polycarbonates “hydrolize”—break down in water—rather easily. A consequence is the much-publicized leaching of bis-phenol-A, the principal building block of all polycarbonates and an estrogen mimic.

A stable, non-leaching commercial polysulfate is an obvious target for SuFEx. Chemists have long assumed polysulfates could not be made by a commercially feasible method, but in a strikingly easy, controlled and scalable process, the Sharpless team made BPA polysulfate fibers.

Initial tests indicate this new plastic may be more resistant to impact and degradation than polycarbonates. “But this was just one demonstration of the technique,” Dong emphasized. “The control and the selectivity that we have in this process mean that we can polymerize a wide variety of different building blocks.”

The other co-authors of the paper, “Sulfur(VI) Fluoride Exchange (SuFEx): Another Good Reaction for Click Chemistry,” are Larissa Krasnova of TSRI and M.G. Finn, now at the Georgia Institute of Technology. See http://onlinelibrary.wiley.com/doi/10.1002/anie.201309399/abstract

The research was supported by The Skaggs Institute for Chemical Biology, the W.M. Keck Foundation, the National Institutes of Health (U01NS058046, EB015663) and the National Science Foundation (CHE 1011796).