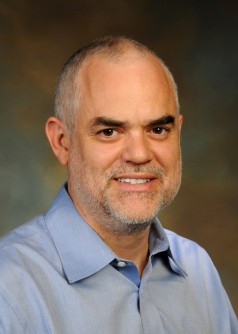 Floyd E. Romesberg, PhD, is an associate professor at The Scripps Research Institute.

Newswise — LA JOLLA, CA—May 7, 2014—Scientists at The Scripps Research Institute (TSRI) have engineered a bacterium whose genetic material includes an added pair of DNA “letters,” or bases, not found in nature. The cells of this unique bacterium can replicate the unnatural DNA bases more or less normally, for as long as the molecular building blocks are supplied.

“Life on Earth in all its diversity is encoded by only two pairs of DNA bases, A-T and C-G, and what we’ve made is an organism that stably contains those two plus a third, unnatural pair of bases,” said TSRI Associate Professor Floyd E. Romesberg, who led the research team. “This shows that other solutions to storing information are possible and, of course, takes us closer to an expanded-DNA biology that will have many exciting applications—from new medicines to new kinds of nanotechnology.”

The report on the achievement appears May 7, 2014, in an advance online publication of the journal Nature.

Romesberg and his laboratory have been working since the late 1990s to find pairs of molecules that could serve as new, functional DNA bases—and, in principle, could code for proteins and organisms that have never existed before.

The task hasn’t been a simple one. Any functional new pair of DNA bases would have to bind with an affinity comparable to that of the natural nucleoside base-pairs adenine–thymine and cytosine–guanine. Such new bases also would have to line up stably alongside the natural bases in a zipper-like stretch of DNA. They would be required to unzip and re-zip smoothly when worked on by natural polymerase enzymes during DNA replication and transcription into RNA. And somehow these nucleoside interlopers would have to avoid being attacked and removed by natural DNA-repair mechanisms.

Despite these challenges, by 2008 Romesberg and his colleagues had taken a big step towards this goal; in a study published that year, they identified sets of nucleoside molecules that can hook up across a double-strand of DNA almost as snugly as natural base pairs and showed that DNA containing these unnatural base pairs can replicate in the presence of the right enzymes. In a study that came out the following year, the researchers were able to find enzymes that transcribe this semi-synthetic DNA into RNA.

But this work was conducted in the simplified milieu of a test tube. “These unnatural base pairs have worked beautifully in vitro, but the big challenge has been to get them working in the much more complex environment of a living cell,” said Denis A. Malyshev, a member of the Romesberg laboratory who was lead author of the new report.

In the new study, the team synthesized a stretch of circular DNA known as a plasmid and inserted it into cells of the common bacterium E. coli. The plasmid DNA contained natural T-A and C-G base pairs along with the best-performing unnatural base pair Romesberg’s laboratory had discovered, two molecules known as d5SICS and dNaM. The goal was to get the E. coli cells to replicate this semi-synthetic DNA as normally as possible.

The greatest hurdle may be reassuring to those who fear the uncontrolled release of a new life form: the molecular building blocks for d5SICS and dNaM are not naturally in cells. Thus, to get the E. coli to replicate the DNA containing these unnatural bases, the researchers had to supply the molecular building blocks artificially, by adding them to the fluid solution outside the cell. Then, to get the building blocks, known as nucleoside triphosphates, into the cells, they had to find special triphosphate transporter molecules that would do the job.

The researchers eventually were able to find a triphosphate transporter, made by a species of microalgae, that was good enough at importing the unnatural triphosphates. “That was a big breakthrough for us—an enabling breakthrough,” said Malyshev.

Though the completion of the project took another year, no hurdles that large arose again. The team found, somewhat to their surprise, that the semi-synthetic plasmid replicated with reasonable speed and accuracy, did not greatly hamper the growth of the E. coli cells, and showed no sign of losing its unnatural base pairs to DNA repair mechanisms.

“When we stopped the flow of the unnatural triphosphate building blocks into the cells, the replacement of d5SICS–dNaM with natural base pairs was very nicely correlated with the cell replication itself—there didn’t seem to be other factors excising the unnatural base pairs from the DNA,” Malyshev said. “An important thing to note is that these two breakthroughs also provide control over the system. Our new bases can only get into the cell if we turn on the ‘base transporter’ protein. Without this transporter or when new bases are not provided, the cell will revert back to A, T, G, C, and the d5SICS and dNaM will disappear from the genome.”

The next step will be to demonstrate the in-cell transcription of the new, expanded-alphabet DNA into the RNA that feeds the protein-making machinery of cells. “In principle, we could encode new proteins made from new, unnatural amino acids—which would give us greater power than ever to tailor protein therapeutics and diagnostics and laboratory reagents to have desired functions,” Romesberg said. “Other applications, such as nanomaterials, are also possible.”

Other contributors to the paper, “A semi-synthetic organism with an expanded genetic alphabet,” were Kirandeep Dhami, Thomas Lavergne and Tingjian Chen of TSRI, and Nan Dai, Jeremy M. Foster and Ivan R. Corrêa Jr. of New England Biolabs, Inc.

The research was funded in part by the U.S. National Institutes of Health (GM 060005).